Purple Baize, All In My Brain

A veritable Cook's Tour on the 472 bus eventually brought me to Heswall.

I started with a Good Beer Guide tick, the Jug and Bottle: 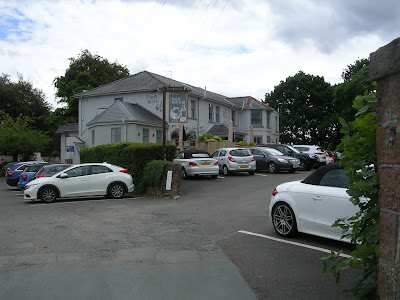 This large house contains a rather good food-oriented pub.  It is mostly knocked through inside although there are some strange interior walls with windows in.  The decor is mostly pastel colours with a few areas of dark wallpaper and bare brick, and a stone floor.  Overall, a pleasant ambience is created.

I took an excellent pint of Brimstage Trappers Hat served in a Brimstage glass, and sat down on a church pew.  A few groups of happy customers filled the room with gentle chatter.

Next, a walk down steep hills.  I enjoyed the scenic views of the Dee and Wales beyond, thinking they won't be so pleasing when I have to climb up again: 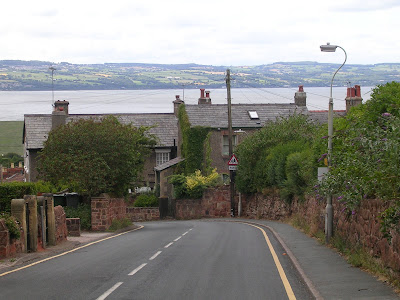 Eventually I reached the Black Horse: 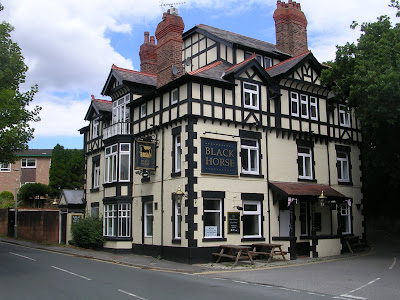 Curses!  It's shut.  I couldn't tell for certain whether this is just Tuesday afternoon or something more permanent, but I suspect the latter, I'm afraid.

I trudged back up the hill as far as the Dee View: 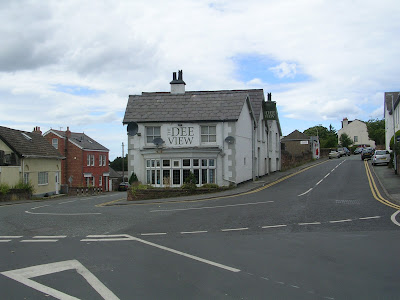 All the regulars, who were sitting at the counter, looked round as I came in.  Only two of the six handpumps had clips, and I chose Trappers Hat again.  It didn't seem quite as great as the previous one, but still good.  Once again, it came in the correct glass.  I noticed none of the locals were on the cask.

Sound in here was a quiet commercial radio station, and chit-chat of regulars and the staff.  Then, the music switched to the selections of a young lady who proceeded to dance and sing along, to the amusement (or possibly embarrassment) of the regulars.  I think she belonged to the pub?  After a couple of numbers she left, and peace and quiet was restored.

The decor in here, wooden beams and the occasional horse brass, is exactly the same as last time I was here, nine years ago.

Next, back towards Heswall town centre, and the Exchange: 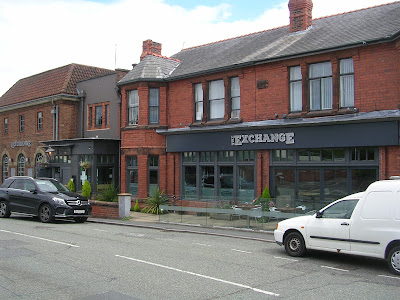 Inside I found a sort of sports bar, deserted on a Tuesday afternoon.  The decor, grey and purple, is actually rather good, and I was particularly impressed by the pool tables with matching purple baize.  Isn't that a Hendrix track?

I must say the Trip Advisor reviews of this place are pretty mixed, to say the least.  I can only report that service was cheerful, friendly and prompt and my seat was comfortable.

Having worked in the industry for many years I was intrigued to learn that the building is a former telephone exchange, hence the name.

Across the road is the Otto Lounge:

One big open room with large windows onto the street, some of which were folded back.  The standard naked air conditioning ducts and retro industrial lighting is mixed with some 1930s glass lampshades.  As well as the eclectic selection of the pictures on the walls, they've got a collection of mirrors, including some wonderful art-deco examples.

I couldn't see anyone eating at four on a Tuesday, but the menu of standard pub fare plus tapas looks good.  As soon as I'd typed that, food appeared and before long I was nearly the only customer not dining.

The trouble with open windows is that wasps can get in.  One annoyed me for a few minutes, but when it tried to steal some of my lager it had crossed a line.  I squished it!

My next port of call was the Paradox Bar: 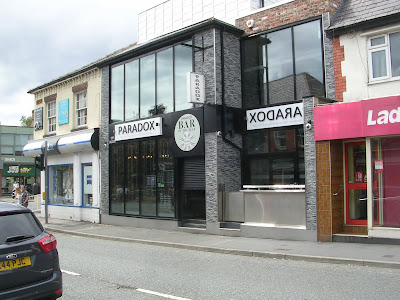 Not really my sort of place, this poncy cocktail bar, but it still has to be done for my researches.

The friendly barman gave me a pint of the house lager, even though I think I asked for a half.  It seemed more flavoursome than a Carling, anyway.

I sat at a table right in the middle of the deserted room, lowering the tone I fear, but with more staff than customers, forty minutes after opening, who cares?

Two girls came down the stairs and were immediately served with food.  Did they order it in an upstairs bar?  Presumably.

I must say the slightly quirky decor in here is rather attractive.  On the Paradox theme, they've got some Escher works, a favourite of mine.  As I say, not my sort of place and definitely not a pub, but nonetheless very pleasant.

My eye was drawn to one of the TV screens.  It was showing the cooking methods for items on the menu.  What a brilliant idea, I was soon keen to try their food.  I'm surprised more places haven't used this clever promotion, although I suppose "Take bag from freezer, 95 seconds in microwave, empty onto plate" wouldn't be so enticing.

I headed onwards, committing the cardinal sin of walking past a never before visited bar called Barcode, I'll save that for my next time in Heswall, and so to the Harvest Mouse: 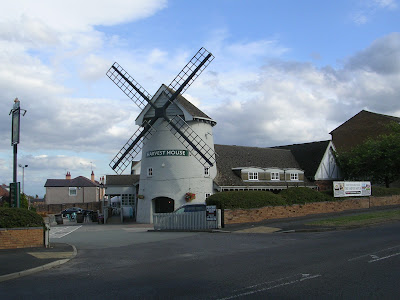 Cor!  That's a hard to beat exterior.  Inside is a slightly disappointing bog-standard pub interior, not as exciting as the outside suggests, but nevertheless very pleasant.

My pint of something from Otter was not bad, but not the best I've had.  I couldn't see anyone else drinking real ale.

The place was ticking over gently, mainly with diners, it's a member of Greene King's Time Well Spent chain.  The sound here was quiet chat mixed with the background music, which as I typed this played the Eagles' Desperado - You can't do better than that.

It was time for the long bus ride back to civilisation, and then a train home.

Coming up:  How about Cains Village on Saturday?
Posted by Phil Wieland at 23:21