I began today's perambulation with an attempt to finish off Smithdown Road, starting at the Evil Eye: 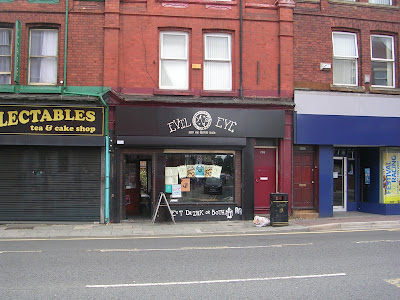 This converted shop has the now-standard bare brick walls and retro light bulbs, and seems to carry off the style better than many.

Two handpumps but no clips, so I had a rather tasty pint of Goose Island IPA, served in the correct glass.  Mind you, at £4.80 a pint, it's not cheap!

The place was ticking over at two on a Saturday afternoon, a group of people at the back of the room were quietly chatting, over some food I think.

The music, a good selection, was at exactly the right volume for the time of day; the giant speakers and audio gear being set up around me told me the "DJ and alternative karaoke" later on will be a lot louder!

I studied the posters.  How come it's "Liverpool Beer Week" and I've never heard of it?  Is that why a group of twenty or thirty people, some carrying bottles, have just walked past?

Next, the Craft Taproom: 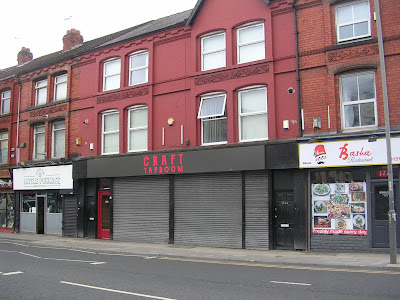 I'll simply repeat what I said last week; what kind of a pub isn't open at one o'clock on a Saturday?  There wasn't even a sign showing opening hours, so I didn't know if it was worth waiting until three.  Whatpub says it opens at one, facebook says two.  I wonder if it's actually closed for good?

On to the Brookhouse: 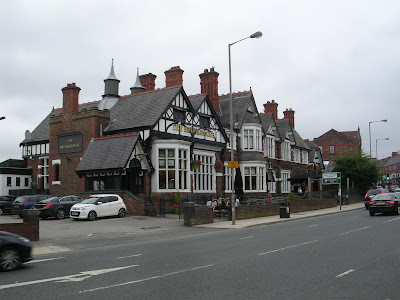 A bit of a change from last place.  Maybe a hundred people in, but this enormous place is still not crowded at all.  Some were eating, others here for the beer, customers ranged from groups of youngsters through families to the old codgers in the corner.  (I don't like to think where I fit in that progression.)  There was a fifty-fifty mix of diners and drinkers

The knocked through interior retains a hint of its original splendour, mainly the high ceiling plasterwork and a few leaded glass panels in the windows.

Should I go back to try the Taproom again, now it's three o'clock?  I can't be bothered, it's their loss.  So, forwards to Hill 16: 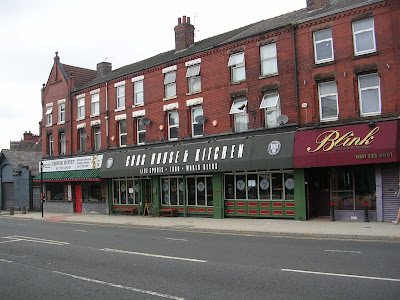 The full name is Hill 16 Grog House and Kitchen, a bit of a mouthful!

No real ale, of course, so I had Heineken.

Inside there's a bit of an Irish theme - the gents is labelled Fir - but this is no "plastic paddy" bar, it's much better than that.  Chit chat between the barman and subsequent arrivals told me they're moving from Irish to more of an American dive bar feel.  Anyway, I couldn't really say why but I liked it.

A gentle stream of customers kept the place ticking over while I was there, some had food.

Golf was on the tellies, the commentary mixing with chatter and rather good background music.

Something that always causes me to cringe: One part of the wall was decorated with 12 inch records.  Although my own collection is tiny, I feel that any vinyl is precious and it's sacrilege to glue it to the wall.  Perhaps my (limited) exploits as a pirate radio DJ influence my feelings on this matter; I would only take enough records for one show into the studio, just in case we were raided and I lost the lot!  (We never were.)

Next, a stroll across the park to Picton, and the Prince Alfred: 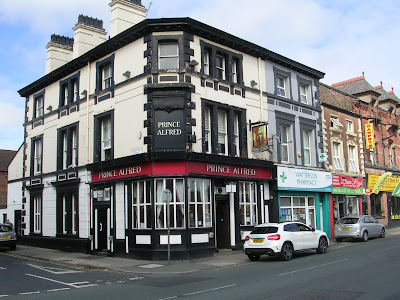 A busy lively boozer, with plenty of friendly locals filling the place with chatter and drowning out the gentle background music.

The decor is fake traditional, the large wood beams and imposing fireplace are all fairly modern, I think, but make for a pleasant feel anyway.  Regrettably the stag's head and collection of chamber pots seem to have been lost in the years since my last visit, in 2003.

Un-surprisingly there was no real ale so I had another lager, Carling this time.

I couldn't get over how lively and busy this place was, perhaps I need to do more Saturday and less Tuesday researches? 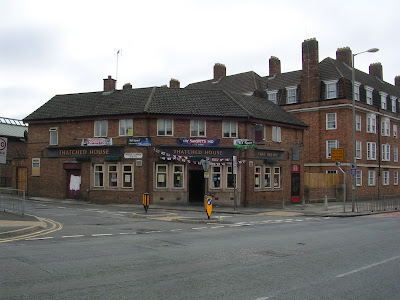 Now this is a true down market boozer, loud music and louder regulars, a very drunk one of whom moved a table so I could sit down more easily.

The inside has bog standard plain decor, as always nowadays well maintained, clean and tidy.

I noticed the local who moved the table for me was drinking cans of John Smiths, not the draft Tetley.  Odd.  He turned out to be the nutter of the pub, dancing to the music and generally messing about to the amusement of the other customers.

One of the regulars had a little dog which everyone made a fuss of.  It was obviously used to being in the pub, and lay down at its master's feet.  I was worried that someone drunk (Possibly me) would tread on it but thankfully no-one did.

Time for the bus home.  Coming soon, possibly:  Kensington and Earlestown.
Posted by Phil Wieland at 23:28