More properly known as Stan's Birthday Do (Thanks for organising it again, Stan, and HAPPY BIRTHDAY!) this is another leisurely visit to a few pubs and a good chance to meet up with former colleagues many of whom I hadn't seen since, er, the Woolton Pub Crawl last week. 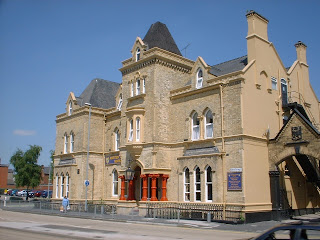 So, on a warm and intermittently sunny Saturday afternoon, we started in the imposing building which is the Patten Arms Hotel, conveniently located next to Bank Quay station.  When I first attended this do, back in 2002, the interior was decidedly threadbare and tatty, but more recently it was given an excellent refurbishment and has been well looked after since then.  It's primarily a residential hotel, but we convene in the wood-panelled lounge bar.  No real ale so a pint of yellow fizz had to suffice. 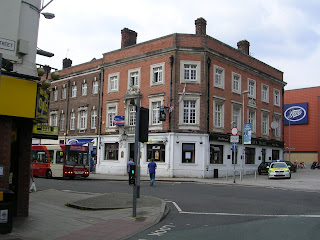 On towards the town centre and the White Hart, another real-ale-less venue unfortunately, although they did have a couple of hand pumps.  A rather good, totally fake, wood panelled interior in here. 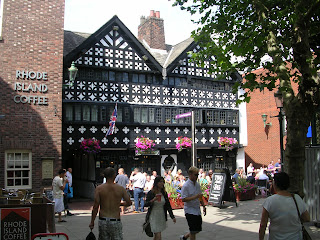 Number three is the Barley Mow, slap bang in the centre of Warrington.  We were a little concerned that the market square was occupied by a large stage for the Warrington Music Festival, but luckily the speakers were facing away from the pub, which didn't seem any busier than on previous years.  Unfortunately the festival meant we had to have plastic glasses for our excellent pints of something from Robinson's.  Dating back to the sixteenth century the pub appears somewhat out of place surrounded by much more modern buildings. 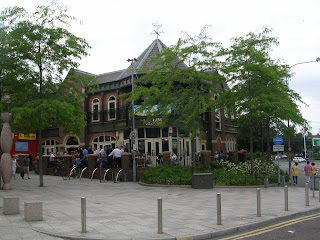 Wetherspoon's Looking Glass was previously a Yates' Wine Lodge.  On one of the previous trips I asked the young barmaid in Yates' for an Aussie White and she hadn't heard of it, which made me feel rather old.

The balcony (Mostly obscured by the tree in this picture.) was pleasant in the warm weather.

Next, just round the corner to Porter's Ale House, a small multi-roomed pub which always looks a little scruffy to me.  The first pints we were served were severely off, so they were quickly replaced with something different.  I was pleased to see the pump clip for the offending beer was immediately turned round, it always annoys me when they apologise for the off beer and then try and sell it to the next mug to come in.

Our final destination was the other Wetherspoon's, the Friar Penketh, for a last drink.

One of the unusual traditional features of this annual event is the early finish due to the last train home being at twenty past seven, so it was soon time to head back to Bank Quay Station.  As always, an enjoyable day out - See you next year.

P.S. Some of the pictures above were taken in previous years.
Posted by Phil Wieland at 12:27 No comments:

Goodness, is it that time of year already?  Indeed it was, so I caught the 89 bus to Woolton on the hottest day of the year.  After last year's problems we started this time in the splendid Gardener's Arms, although I'm told the Derby was open today, unlike last year.  The Gardener's was as good as ever, with a range of real ales available, and I settled on a pint of Landlord which was spot on.  We followed a bit of the cricket on the TV until it was usurped by football.

Up the hill to the County Court next, where we were disappointed to find the sole handpump, which had a Doom Bar clip, was not on.  So I resorted to lager.  Like the previous calling point, no change in decor here either.  Unlike last year, there were hardly any other customers in here, in fact there was just one when we left.

Last year the Cobden was shut when we got there.  No such problem this time, and we were soon settled down in the comfortable friendly surroundings enjoying something rather good from Liverpool Organic Brewery.  I hadn't been in here since 2008, when there was one real ale available, they're up to four now I'm pleased to say.  Pleasant though the interior is, I must say I was rather fond of the wagon wheels and fake half timbering of its previous incarnation. 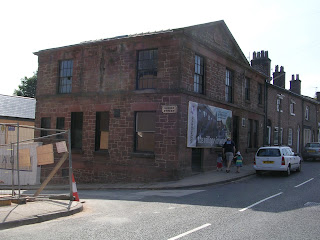 The next pub to be seen was the long-closed Village Inn which is still standing, pending conversion to residential usage.


Just a little further along Quarry Street comes the Victoria, where I nipped out of the back door to check out the advertised beer garden while my friends got the drinks in.  Apparently the landlord then told them I shouldn't go out because the dog was loose.  Needless to say, no-one chased after me to pass on the warning but luckily the dog couldn't be bothered to come downstairs to see me, and I returned to the bar unscathed.  Once the dog was safely shut in we all adjourned to what I would call a beer yard rather than garden, and we sat in comfort in the shade and enjoyed another fine pint.  Again, not many customers here apart from us. 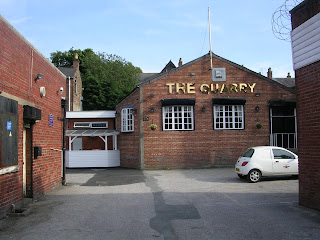 Our next port of call was a very unexpected bonus - A new addition to my guide.

Formerly the British Legion I think, it's now called The Quarry.  Perhaps a little unimpressive as you pass through the metal gate and cross the yard, but once you get inside it's much better:  We found a function room which appeared to be set up for a wedding reception and a pleasant comfortable bar where the regulars seemed rather startled by the invasion of twenty pub-crawlers.  No real ale I'm afraid, so it was lager again.

Moving on, we headed for the Elephant.  No change in here since last year, the interior remains well cared for, and once again I enjoyed a fine pint of Speckled Hen.  We'd reached early evening by now, and the young ladies of Woolton provided a scenic distraction as they commenced their Saturday night out.

Regrettably at this point in the evening I decided it was time to wimp out and go home, so I'll be looking forward to hearing later this week details of the remainder of the crawl in the White Horse, the Bear and Staff and the Black Bull.

So, once again a highly enjoyable annual get-together where I was pleased to meet a number of people I haven't seen since last year's crawl.  For some more information on the history of the crawl, see my post from last year.

One final footnote about beer quality:  I have noticed in the past that a hot spell soon finds out those pubs with unsatisfactory temperature control in the cellar, but on the hottest day of the year, at the end of a very warm week, every pint of real ale was of top notch quality. Well done Woolton.
Posted by Phil Wieland at 14:45 No comments:

Ah, the suffering I endure just to keep the guide up to date!

Another blood donor session yesterday, so I seized the opportunity to check out a couple of pubs in the city centre.  But not for me one of the many splendid real ale establishments on offer.  No, I walked past a number of them as I did a little shopping, and then headed to Great Charlotte Street, where I started in Tess Riley's.  On a Monday afternoon I was pretty much the youngest person in the pub, a situation which is getting very rare nowadays.  The inside is mostly brewery standard decor, but with a few bits of wood carving and panelling.  There are also a couple of good watercolours of other pubs.  A number of people were eating, the menu looks to be decent value.  In the absence of any real ale and in view of the hot weather, I had a pint of Foster's.

I walked next door, into JR's Bar.  Rather more modern decor greeted me, and once again I had to resort to plastic fizz, Carling this time, I think.  The place has changed somewhat since I was here previously, when it had an American theme to the decoration.  I noticed an impressive display of model ships above the bar.  The menu of standard pub meals looked to be very reasonably priced for a city centre location such as this.
Posted by Phil Wieland at 20:47 No comments: