A recent report in Merseyale mentioned three new cask ale outlets on Lark Lane, so I decided to pay the area a visit.  The last Saturday before Christmas is not a good time to be out and about, and my train into Liverpool was full and standing (and late), but things calmed down once I was heading out of Central towards Aigburth.

My web research suggested all three were more restaurant than pub, but let's see...

I started at the Old School House: Definitely more of a restaurant than a pub, but they were happy to provide me with a pint of White Rat which was gorgeous as always.

Quite empty at one on a Saturday with only a few tables occupied.  The waitress guided the scruffy pub researcher to an out of the way corner, so I couldn't see if the other tables were eating, but I suspect they were.

The decor, bare brick and white tiles, makes the place a bit echoey, I wouldn't like to spend too long in here at a busy time, without ear defenders!  Nonetheless, it was pleasant, warm and comfortable this afternoon.

Two more restauranty places to check out, next I crossed the road to the Ink In The Well: Another one which is more restaurant than bar, but this time there's a small drinkers' area by the counter, to which the waitress guided me before bringing a pint of Boltmaker which, again, was spot on.

The down side of my comfortable seat was that I couldn't see who else was in, but at two on a Saturday I could hear a hubbub of cheerful chatter and the clink of cutlery on plates, suggesting the place was a bit busier than the previous tick.

I think perhaps the decider of the restaurant or bar question is that the handpumps here are hidden behind pot plants on the counter, so you have to lean over, or ask the waitress.  On the other hand, the waitress knew which cask ales were on, try asking in Wetherspoon's and see if they do.

The decor once again has some bare brick, this time mixing nicely with modern wood panelling.

I checked out the drinks menu on my table, it lists a good range of craft beers but doesn't mention cask at all, not the best way to boost sales. Another restaurant/cafe, but once again happy to welcome a drinker, although there was significant delay before my pint of stout arrived.  I couldn't quite read the pump clip from my seat so I don't know whose it was, but it was gorgeous.

There were two handpumps, the other offered John Smiths, I didn't know they still make that in cask.

Quite a few eaters were in, the place was doing well.  I didn't see any other cask poured while I was here; it's surprising, and admirable, that they manage to keep the quality up.

Another potential pub/restaurant decider is perhaps a candle on the table, this one and the last had one!

That's more than enough restaurants, I think, so it's time for a pub and, if I'm honest, the real reason for today's excursion.  The only Good Beer Guide entry in Merseyside I haven't ticked is the Little Taproom on Aigburth Road: An above average micro in my opinion, this, serving high quality real ales.  No free tables (of the three) in the front room, but there's more space in the back - Does it count as a micro if there's more than one room?

My pint of I forget what was lovely, anyway, (although my friend John would have complained it tasted of varnish) and I was entertained by listening in to two blokes playing some kind of trivial pursuit game.

Shortly after I arrived more customers came in, and all tables were soon occupied.

I noticed this place calls itself a "micro pub and distillery".  Do they really make gin in the back?

Having been awake since 4 a.m. to "enjoy" the cricket I was flagging a bit by now, so it was time to head for home. Four pints of quality ale counts as a very good day out, I think, even if three of them were in restaurants!

Under the river and along to Bromborough, where I started by looking for the remains of the Archers, one that got away, I'm afraid.  I discovered it's completely gone now, replaced by a housing block called Archers Corner.  Here's a picture from 2012: 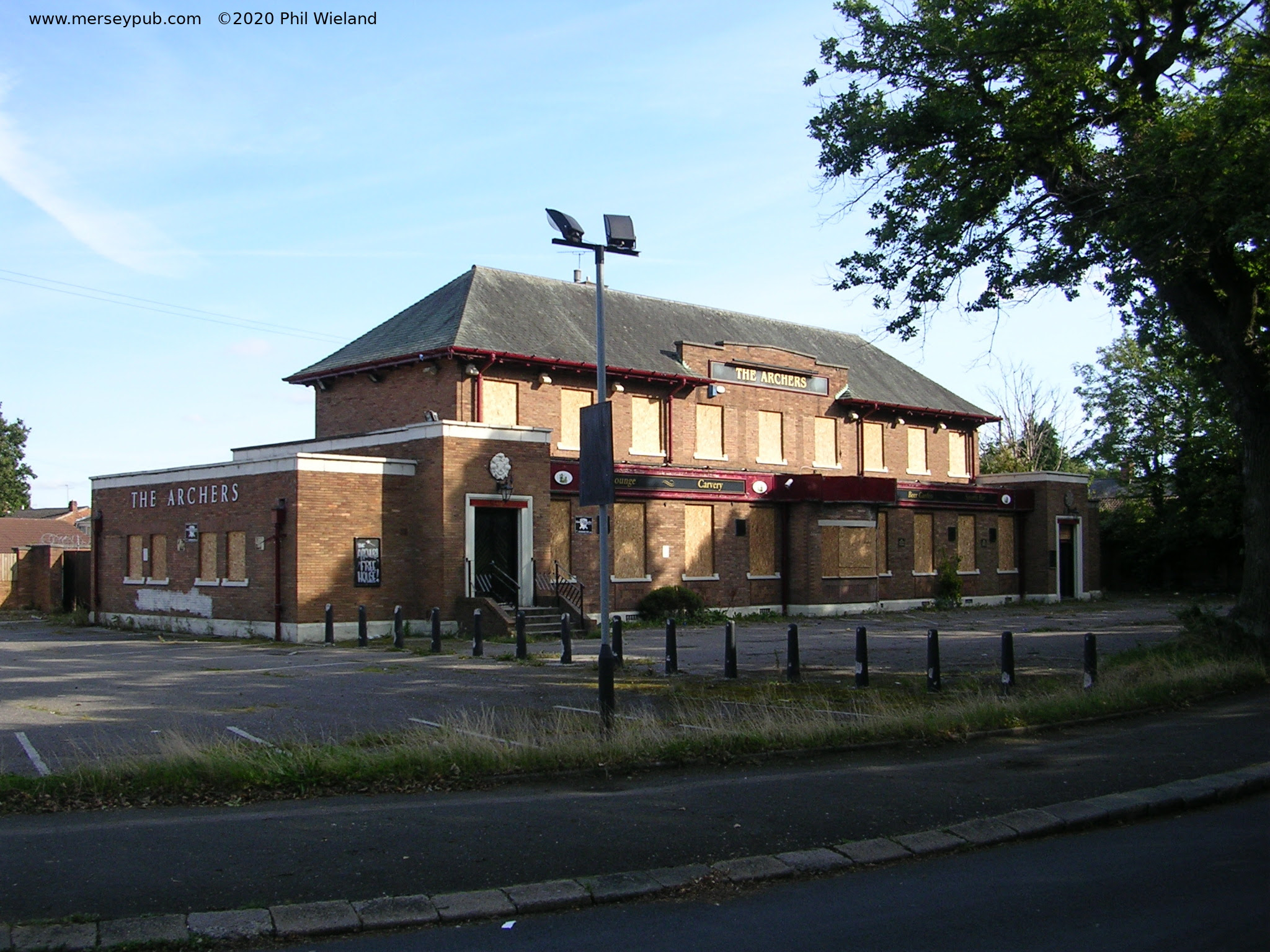 On to the main target of today's trip, the Bow-Legged Beagle: 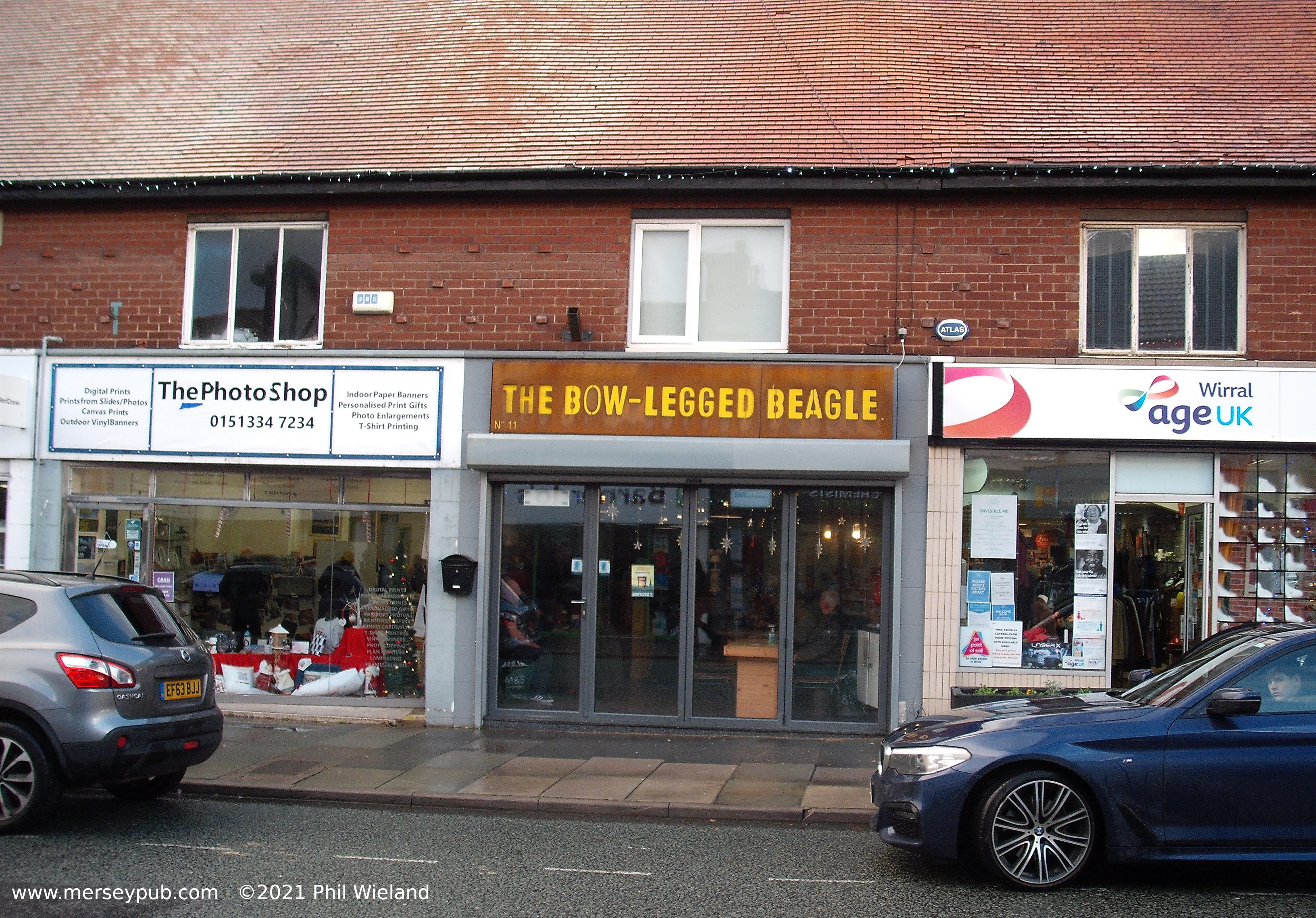 The third member of the chain, I think, and this one has made it to the Good Beer Guide this year, moving it to the top of my target list.

Inside the former butcher's shop I found rough bare brick walls in a corridor bar with a small counter half way along.  The barman kindly handed me some paper towel as I peered through misted up spectacles at the four handpumps.  The decision didn't take long once I spotted Ossett White Rat, one of my favourites.  It was lovely, as expected!

The place was ticking over nicely, at three on a Friday, gentle conversation forming the soundtrack along with a wide ranging selection of music at a comfortable background volume.

I scanned the fridge full of colourful cans from various craft brewers, and my fondness for puns was tickled by "Reptile Dysfunction"!

Next, I ignored two nearby pubs visited in 2019 and headed along to the Merebrook, not ticked since 2012: I seem to have selected the bar side here, a plain but pleasantly done room with fake parquet flooring.  Quite a lot of customers of all ages were enjoying a Friday afternoon in their local boozer, with chatter significantly louder than in the Beagle.  Racing and women's soccer were on the tellies, but I couldn't see anyone watching.

No sign of any handpumps, so it was Carling for me.

I've no idea what custom was like here two years ago, but it didn't seem like the pandemic was causing people to stay away.  Sadly, many pubs were struggling pre-covid, and so if ten percent of people decide not to come out it could push some places over the edge.  It will be interesting, and possibly very depressing, to monitor closures in 2022.

One of the regulars said "goodnight and god bless" to everyone as he left.  Seems a bit early, it's not yet four o'clock and it's not even dark!

After studying their web site I decided the nearby Dibbinsdale is now a restaurant, and so doesn't need a re-visit, leaving just one more overdue tick on this side of the Wirral, but it's a long walk from here and I'm afraid laziness and the fact it had started raining caused me to wimp out and go home!