A train and a bus took me into Liverpool's inner suburbs, specifically Childwall and the Halfway House: 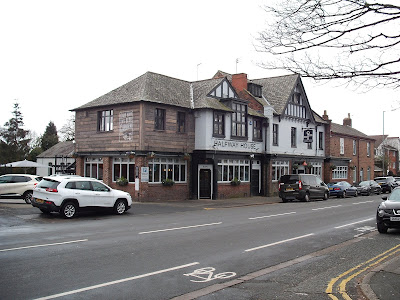 I entered the bar side to find no staff and only one customer, sitting at the counter.  "You'll get served quicker in the other side", he advised, so I went through the corridor to find a much busier lounge side, with more than half of the tables occupied by diners.

Pedigree and Doom Bar were on handpump and my Pedigree, served in a John Smith's conic, was a little over-chilled and tasted rather bland, where's the Burton Snatch?

Gentle background music mixed with the chatter of happy diners as I enjoyed my pint.

It's almost ten years since my last visit here, when the place was packed with people wearing 3d glasses watching footie on the telly.

Next, a stroll through up-market suburbia to the Childwall Abbey: 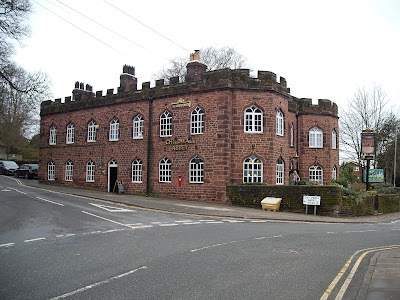 This place was substantially refurbished in 2018.  I can't recall details from my previous visit in 2006 but I get the feeling the interior is less "historic" than it was, although it's certainly very pleasant.

Despite being branded a Marston's house, they didn't have Pedigree on, my pint of Bombardier was fine.

Again, gentle muzac and cheerful chatter were the soundtrack here.

At this point, something I love about my life in Liverpool happened; a former work colleague walked in.  Pub research was put on hold for an extended catch-up session.

I said goodbye to Alby and headed on to Wetherspoon's Childwall Fiveways: 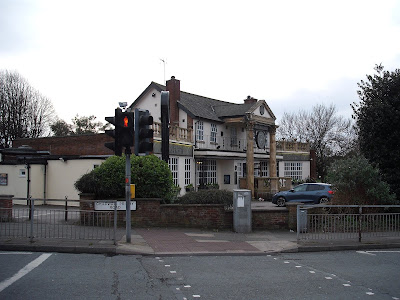 The Fiveways was a regular Friday night haunt of mine thirty years ago, and inside it hasn't really changed, a rather good fake traditional style pub with dark woodwork and leaded glass panels.

My pint of a stout from Big Bog was excellent, pint of the day so far.

The pub was, as you expect in a 'spoons at half term, busy with families enjoying food and drink.

My mind wandered: When I was five years old I don't think my parents would have considered it appropriate to take me to a pub - It's interesting how the norms have changed in the intervening years.  All the little ones today were reasonably well behaved so I didn't feel their presence detracted from my enjoyment of the boozer in any way.

Onwards along Queens Drive, to the Rocket: 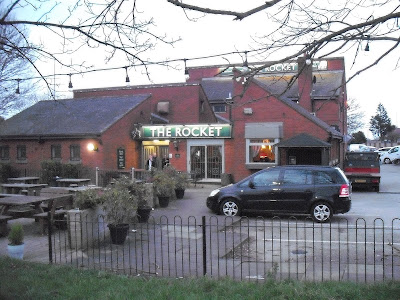 A well cared for modern construction which, I think, replaced a pub of the same name demolished for the construction of the adjacent M62.

Fairly quiet at five on a Tuesday but still ticking over. I checked out the menu which I must say looks to be good value; my standard reference, fish and chips, is only £7.69.  I couldn't see anyone eating, though.

No real ale, so a half of Canadian fizz sufficed.

Just a hundred yards or so to my final call, the Turnpike, it was OK when I set off but I was being shot-blasted by hail by the time I got there.  (Too dark for a photo, I'm afraid.)

Concentrating on their food offer, the place was quite busy, family groups and couples enjoying their dinner from the standard pub menu.

Just one real ale was on offer, my pint of Doom Bar was in good nick.

The quiet background music was completely drowned out by chatter and the rattle of crockery.

I forgot to look for the time capsule to be opened in 2045 that I noted previously, I hope it's still here.

Pub of the day: Childwall Fiveways because it provided the pint of the day.
Miles walked: 3.4 (Would have been less if I hadn't caught the wrong bus!)
Posted by Phil Wieland at 23:22 No comments: