I started today's outing in the Brown Cow in Gateacre: 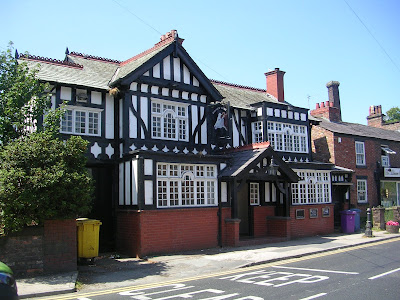 In contrast to the half-timbered exterior, the inside is modern.  A pleasant plain boozer, knocked through into one open room, and very well looked after.

Three hand-pumps on the bar, but all the clips were turned round (NBSS 0).  This is probably why we don't come in here any more on the Woolton Pub Crawl, which this year started just round the corner in the Black Bull.

The sound was some daytime TV rubbish, mixed with cheerful chatter from the three or four locals.

On to what used to be the English Rose, now the CookHouse: 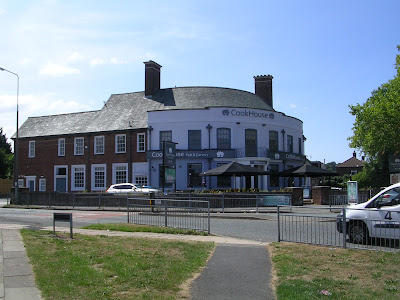 Inside the unusually curved building, the English Rose retained a few original-looking features, but they have now been swept away in the comfortable pleasant modern interior.  They concentrate on food, and there's a large carvery counter at one end of the room.  At two on a Thursday no-one was using it, although there were a number of diners about the place finishing their lunches.  I wonder how long a joint of roast beef can sit under those lights before it goes dry and leathery?  (Not a complaint since I didn't try any, a well run place would throw it out before that happened.)  There were nine chickens rotating in the spit-roaster so they are obviously expecting some more custom later.

I risked a pint of Deuchars IPA from one of the two handpumps, it was a bit tired but just about drinkable (NBSS 1.5).

I see from the TV screen displaying their adverts that there's an electronic pub quiz here - "no pens, no paper, just download the app".  Makes me feel old!  If you're doing the quiz on a smart phone, what's to stop you looking up the answers on Google?  [Other invasive data-gathering search engines are available.]

A bloke who had been sitting outside brought his lager back because a wasp had landed in it.  He got a free replacement!

Next, an awkward border-line pub, is it in Halewood or Woolton or Hunts Cross?  Whichever is correct, plotting the pubs on a map shows it's not far from the CookHouse, so off I headed.

The Grenadier is housed in an unusually-shaped 1960s building: 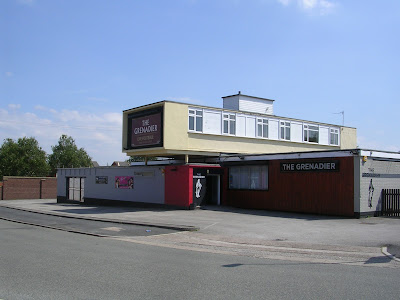 Apart from being beautifully maintained inside and out, this doesn't seem to have changed much since my first visit back in 1999.  It retains what could be the original layout, and probably the original matchboarding.  The lounge side looked out of action so I sat in the bar, the only customer.  There's a smaller room off to one side, I don't know what its original function was, perhaps just a snug, but with no windows and the lights off it wasn't in use today.  I've no idea what the sticking-out upstairs is or was for, I couldn't even see a way up - perhaps staff accommodation?

Unusually, when I ordered my drink "Carling please", I was asked "half or pint?"  I stopped saying "pint of" a few years ago and this is the first time it hasn't worked.  (NBSS 0)

I was about half way through my drink when another customer came in.  I always think it's great if the landlady knows your name, and Brian was so honoured.  Another one (Jack) joined us later.

On to the Waiting Room(s): 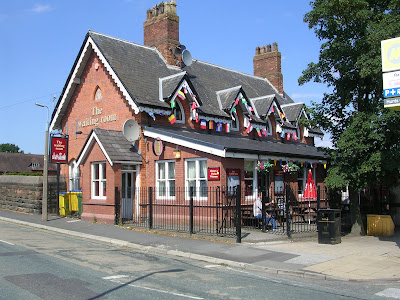 The signs outside names this "The Waiting Room", but the fake etched glass in the windows says Waiting Rooms, so who knows what the correct name is?  The nit-picking pub collector's nightmare!

Anyway, whatever the name, inside is a partially knocked through pub surrounding an island servery.  Most of the interior is in the original station building but the front part is an enclosed area outside the original late 19th century walls.  This makes for a fun, quirky layout.  It's strange to have an old stone and brick wall complete with windows across the middle of the pub!

No real ale so I had another Carling, with no question as to the quantity this time.  (NBSS 0)  I reckon this would be a good place for a real ale pub, similar to the ones in Irlam and Urmston on the same line.  Mind you, I would only come in once every five years so who am I to comment?

A number of regulars were chatting, the only other sound was racing on the telly.  The large speakers implied it would be a lot noisier later or perhaps tomorrow evening.
Posted by Phil Wieland at 23:56