Latest news from the unstoppable pub chain is that they plan to open The Watch Maker on Eccleston Street in Prescot in early December. See you there!
Posted by Phil Wieland at 08:37 No comments:

A Dash to Southport

Imagine my annoyance when I realised that one of the new entries in this year's Good Beer Guide was a pub in Southport which I had never visited. Time for an urgent train trip. 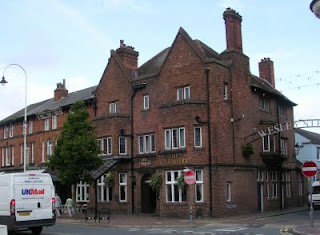 The Volunteer is just a short walk from the station. Outside it is a rather impressive building which looks like it dates from the 1920s I guess. Inside it has been knocked through to make one large open bar area, plainly decorated but well looked after. On a wet Wednesday lunchtime it was ticking over nicely with a number of regulars sitting at the bar. I got a slight feeling of the music stopping and everyone looking round as I went in, but they soon got back to their chit-chat while I settled down to a fine pint of Thwaites' Wainwright. I'm not entirely convinced that two real ales (The other was Lancaster Bomber.) is enough to merit a Good Beer Guide listing but the ale was spot on so who's complaining.

I moved on in the blustery wind to re-visit the splendid Baron's Bar in the Scarisbrick complex. Fun fake "baronial hall" decor and about ten real ales on tap. There comes a time in every man's life when he must admit that he will never again be the youngest person in the pub. I can report that I haven't reached that stage yet! (Technically, the barman was definitely younger than me so maybe this doesn't count!)

Next it was time to choose a pub at random so I selected the Oast House which I haven't visited simce 1998 when my notes grumbled about the poor quality of the real ale. No danger of a repeat of this problem, because they don't sell any any more. A plain back street boozer with Sky Sports on the telly and just a few regulars in. Unusual sight of the day was the regulars and the barman playing snakes and ladders, for money!
Posted by Phil Wieland at 23:02 No comments:

The new edition of CAMRA's Good Beer Guide arrived today. In Merseyside eight pubs have been dropped from the guide, and there are fifteen additions.

Which pubs are they? You'll have to buy CAMRA's book to find out!
Posted by Phil Wieland at 13:42 No comments:

I've been meaning to visit here ever since it was Colin's Bridewell some years ago but never quite got round to it. Colin's became a restaurant for a while, but the latest (and apparently best) use of the site is as the Liverpool One Bridewell.

The building is a former police station dating from mid 19th century. The splendid interior has a vaulted brick ceiling and features a number of cells where you can enjoy your beer.

The real ale, from the Liverpool One brewery plus guests, is excellent and there's a reduction for CAMRA members. I had a pint of the superb Stout Mary from Ilkley Brewery. My pint was carefully filled to the top so I was rather surprised when I sat down to realise it was in an oversize lined glass. Is this the only place in Liverpool that still uses them?

By the way, the word bridewell isn't in my dictionary, but it seems to mean a prison or police station. Bridewell Palace, built in London during Henry VIII's reign, was later used as a "house of correction". It burned down in the great fire but was rebuilt and continued to be a prison until 1855.
Posted by Phil Wieland at 22:54 No comments: