Would my luck improve after Tuesday's disappointments?   Once the rain stopped I headed for the Kensington area of Liverpool and began my researches in the Olympia Hotel: 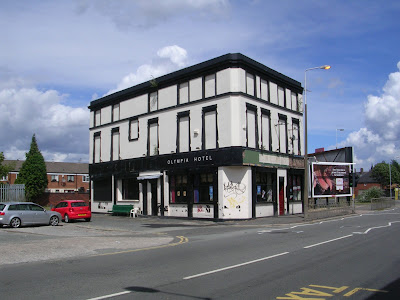 I had thought this place was closed, it has looked tatty for a long time, but passing by on a bus earlier in the week I had seen it was still open.

Inside the rather scruffy building is a beautifully cared for three room pub.  Both lounge and bar were populated by plenty of cheerful locals.

The lounge, where I sat, is completely covered in Everton paraphanalia, I didn't check whether the bar side was "red".

The conversation here was about town (That's Scouse for the city center, by the way.) being too crowded due to the Pride festival.

Across the road from here were the famous Grafton and the Derby, both closed now: 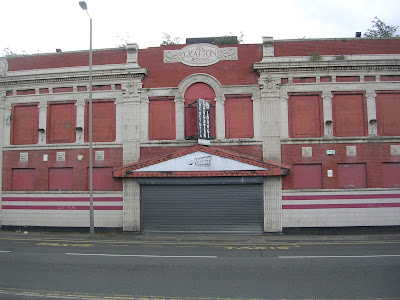 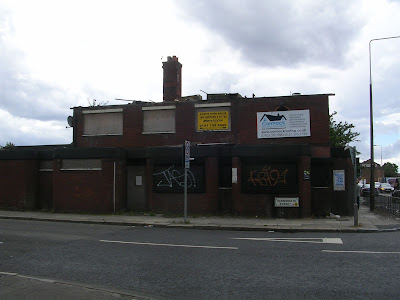 I headed for Boaler Street, a road which at the time of my first visit had umpteen operational pubs, possibly the last back street in Liverpool which could still claim to have "a pub on every corner."  Would any have survived into 2018?  It was time to test my luck.

The Alexandra Lodge is now something religious, a reversal of Wetherspoon's trick of converting a Methodist Hall into a pub: 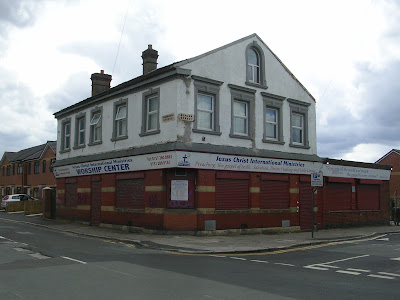 Next, the Bourne Arms has completely disappeared in what is now an industrial estate, and then the Cumberland is housing: 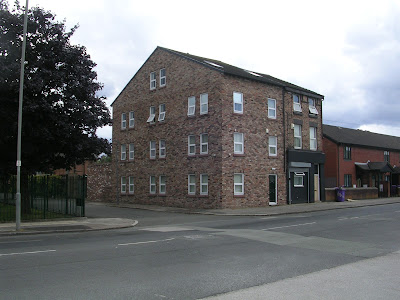 When I reached the Newsham Park I was surprised to find it open, my Streetview researches having suggested otherwise: 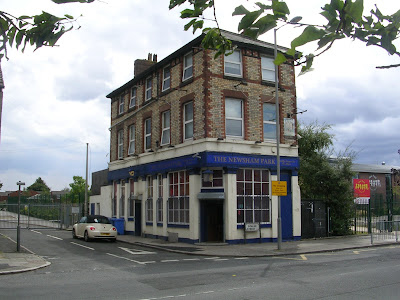 They've knocked through into the former back room since I was last here, I think, creating a plain friendly one roomed corner house.

Once again, Saturday afternoon means a significant number of regulars, and the background chatter was louder than the music.

Unknowingly, I was sitting in Tommy's corner, so when he turned up I had to talk to him - The landlady warned he might sit on my lap because I was in his seat!  Actually, he was a useful source of info, telling me the next target was open - "I've just come from there".  He was keen to buy me a drink, but I explained it was one per pub, so we shook hands and parted.

So, on to the Sir Walter Raleigh: 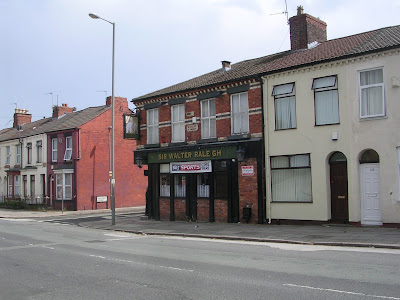 A plain beautifully kept boozer this one, with half a dozen regulars keeping it ticking over.  One of them was driving the juke box, which was slightly louder than the background chit-chat.  (His taste in music was not the same as mine.)

While I was drinking my lager, a man arrived with a parcel which was six inches by six inches by about ten feet, labelled Projector Screen.  When he came up to where I was sitting I said "It'll never fit".  "I told them, but that's the size they wanted" he replied.  Surely the time to install a giant screen was before the world cup?  Although it's just in time for the new football season, I suppose.

I should confess that I swigged my lager more quickly than usual in here, to make sure I escaped before Tommy joined me - His last remark had been "I'll see you in there, get me a pint of Carling!"

That's it for Boaler street, so I moved on, passing the closed Molyneux: 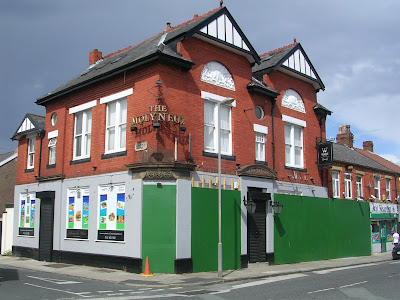 The weather, sunny so far, spotted me with rain, although the sun was still shining.  On to Kensington - the road, where my first call was the Vinebrook: 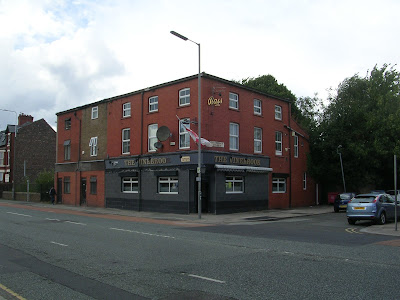 Once again, a well cared for boozer, one open room partly divided by odd lengths of wall.  One part is raised two steps above the rest, this feature seen in every Oak Lodges house, is a subtle way of creating an area that feels separate without blocking visibility.

A hubub of locals' chatter mixed with racing commentary in here.

Last time I visited it was during an England match in Euro 2004, and all the regulars had painted faces, hats, and hooters.  I wonder if they did the same in the recent world cup?

As I drank my fourth Carling the sky blackened.  Would I get soaked?  Only a short walk to the next pub, and thence to the bus stop, so probably not.  A brief downpour threatened to spoil that prediction, but by the time I'd been to the gents it was almost over, so I just caught a few spots on the way to the architectural splendour that is the Kensington: Still a miniature gem, this three room classic has the lounge served via a hatch in the leaded glass bar back.  There's also a back room with a "stable door" to the servery, but I think you're required to walk to the lounge's hatch to get served nowadays.  In 1999 I enjoyed waitress service in this room.

Back in 2009 I noted this place was closed, thank goodness it wasn't permanent!

The sound here is purely the hubub of cheerful chatter from the large number of regulars.

As usual, I was monitoring the activities of the other customers:  I'm sure "Excuse me!  Landlady!  Two halves of lager" is not the way to ingratiate oneself with the staff.  Mind you, it seemed to work, maybe I should try it instead of waiting patiently to be served!  Oddly, the two halves were for someone else, and the purchaser left them on the counter and disappeared.

Another strange sight, a bloke came in carrying a bar stool.  He moved another stool out of the way so he could sit on the one he'd brought.

Time for a bus home.  Coming soon:  With the resumption of normal-ish train services, somewhere over the water, maybe Heswall?
Posted by Phil Wieland at 23:04