A Bonus in Liscard

Another Wirral survey, but not rural this time.  I started in Wallasey at Sheridans: 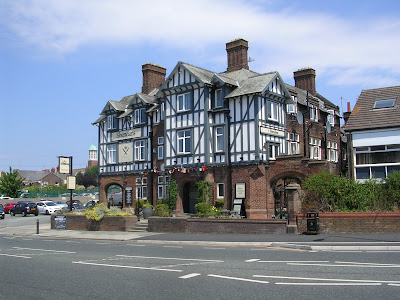 Back in '04 when this was the Black Horse I described it as rather tatty.  Definitely not the case in Sheridan's which has great, rather restrained decor in the two sided interior.  It's clearly well looked after.

There were three real ales on the bar but at half twelve on another hot day I didn't want the first one out, so stuck to fizz.  No cask ale was pulled while I was here.

I noticed a local called this "The Black", I often think people renaming a long standing pub are on a hiding to nothing.

Every table had a rack of menus and a number but none of the handful of customers were eating.  I did notice a strong burnt food smell emerging from the kitchen, though, so something was (over) cooking!

The DJ console and glitter ball suggested it'll be a lot noisier later, in contrast to the peaceful calm I was enjoying.

Next, a short stroll to the Cheshire Cheese: 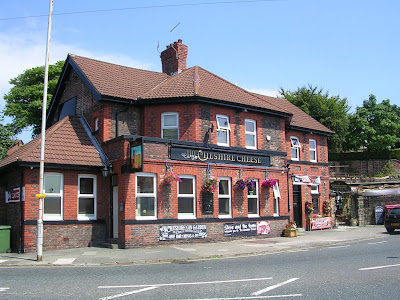 Just three customers and me in this very pleasant multi-room pub.

Contrary to my decision in Sheridans I decided to risk the cask here, and my pint of Landlord was pretty much perfect.

The interior seems unchanged since my last visit, in 2004, but it's obviously had care and attention since then, keeping it in good nick.

I bet this is a great pub to have as a local:  Friendly, comfortable and serving quality ale.

There's a fine collection of gin bottles filling the high shelf all round the rooms.

A quick check of the Ship confirmed it was closed, as expected: 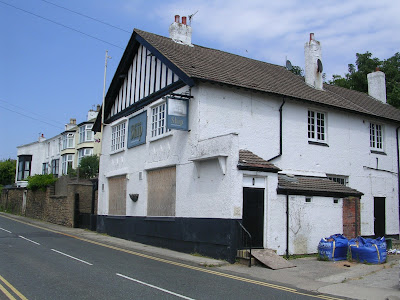 Next, a longer walk took me to the Boot, which now opens at four, apparently.  Hmph: 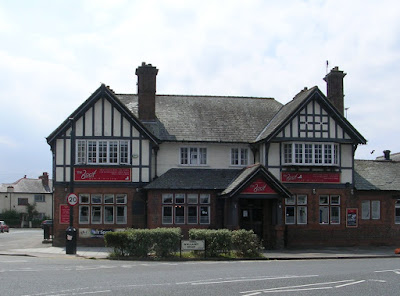 Will I still be here at four?  Probably not, in which case it's their loss, I'm not coming back to Liscard for just one pub!

Across the road is the Scrap Yard: 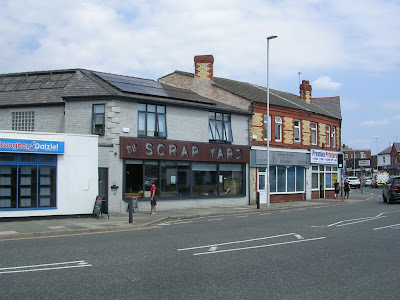 Inside I found a quirky fun interior full of tables, with just a few customers drinking coffee.  At the bar there were twenty or more craft ales, too many for a pub ticker to make a quick choice!  I always feel under pressure when the barmaid is poised to serve me, so I quickly selected a stout from Mad Hatter which turned out to be fantastic.

They've got one of those clusters of fake retro lamps, but someone was too lazy to fix them to the ceiling, so instead it's twelve bulbs tied together in a bundle which, actually, looks rather good, better than the standard spread out arrangement.

My next port of call was supposed to be the Tower but hang on, what's this?  It looks like a pub and by golly it is a pub!  I'd never noticed Rocks before, but here it is: 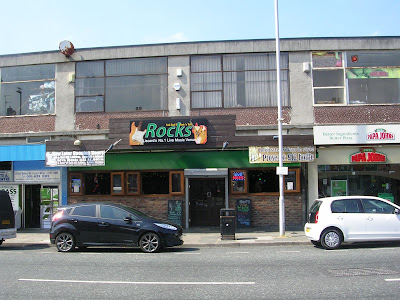 Well I never!  It's a rare event nowadays to come across a completely unexpected pub, I must have missed this on my streetview walks.  Bonus!

Located next door to a Wetherspoon's you're faced with a choice:  Either you compete and do real ale and cheap food, or you go a different way and do something else.  This place has chosen the latter, and seems to be doing a good job.

I was surprised to note that the keg bitter here was Bass, I didn't even know that still existed.

No real ale, but the decor is great fun and I bet it does well in the evenings.  There's a bit of a Mexican touch, I think.  One has a choice of seats at the bar, posing tables, comfortable-looking booths, or tables and chairs on the mezzanine.

There was exactly one customer plus me at 3pm, but I'm sure it's busier later.  The signs advertise live music Wednesday to Sunday nights.

On to my next planned target, the Tower: 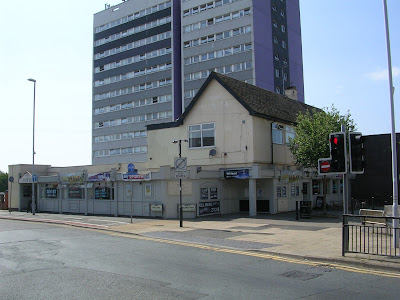 I've not been in here since 1999, and I reckon it's not changed much, still a well cared for two sided boozer, at the end of the main shopping area.

The three or four drinkers, along with the barman, were watching world cup footie, whilst I selected a seat from which I couldn't see a screen.

I spent some time thinking about the interior here.  I'm guessing it was built in the late 60s or early 70s, and that it hasn't changed much since.  If I'm right, it's perhaps worthy of preservation as there're not many surviving pubs from this era.

So, it's gone four o'clock but, thanks to the discovery of the Rocks, the Boot has lost out and will have to await my next trip here, which could be five years away.  Of course, now that I've written that a new micro is bound to open and get in the GBG and I'll need to come back next year!