Back to Kirkdale for today's researches, I started by photographing the closed Selwyn: 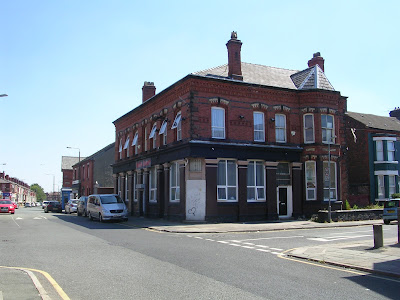 The mess at the front told me Player's must also be closed: 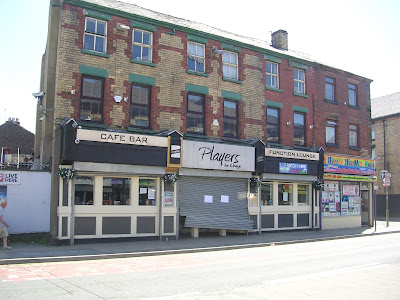 But wait!  The sign in the window says "open use side door", and lo and behold, round the corner the fire exit was open, and I was in.

Just two regulars and I populated the large open room which surrounds the island servery.  It looks very different from my recollections but that's because I came here post-footie when it was packed.  Actually it's probably exactly the same, except for a new coat of paint and a regular hoovering.

I walked down a side turning towards the football ground, and the Spellow: 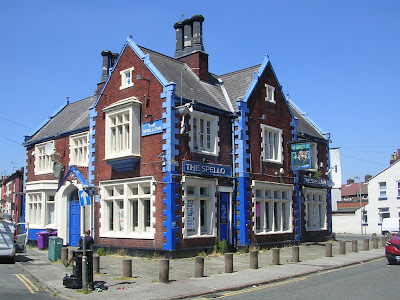 Another pub familiar after matches, when it would be jam packed and, to my irritation, they put prices up.  My favourite trick was to arrive here a few minutes before full time and get a cheap pint before meeting my football-fan friends, who had to pay more!

If we'd made a formal arrangement to meet I could have greeted them with a round, but it wasn't usually that certain, and in any case the place was so full by the time they arrived it might take ages before we actually met!

Anyway, back to today:  I was startled to see a white table cloth and sparkly decorations on every table.  The landlady/barmaid advised there was a wedding/christening but they weren't coming until three.

My order for Carling resulted in her asking the only other customer to go and change the keg so I guess he was staff as well.  I volunteered to have Fosters instead to save the bother, but he went anyway.  I expect they'll need Carling for the function.  I sat at the bar as I didn't want to leave a beery mark on a tablecloth!

I know one shouldn't listen in to other people's conversations but I couldn't resist.  Apparently the bride is too young to have a drink.

I strolled on to the Winslow, a great post-match haunt: 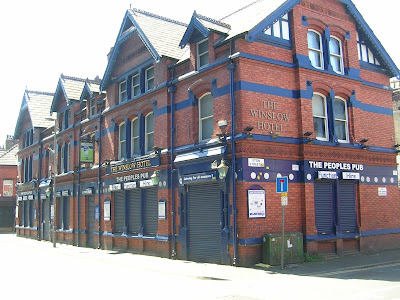 I'd had this down in my database for some years as closed but clearly it isn't.  Not open at one o'clock on a Tuesday, though.

I headed back to the main road and another memory of this area popped into my mind:  On these side streets I used to walk down the middle of the street if it was dark, because the risk of stepping in dog mess was too high if one used the pavement!

Next call was the Brick, as it's now known: 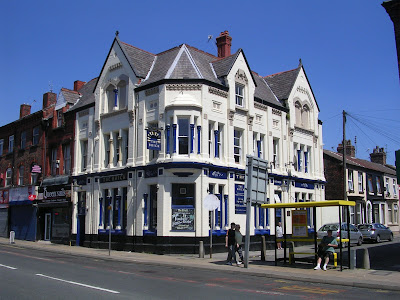 The Prince Albert, as it was named then, was a pre-match call on the few occasions when I actually went to a game at Goodison (A wonderful experience that every non-football-fan should try at least once.) so once again my memories are of a jam-packed place in marked contrast to the peaceful empty room I sat in today.

The Albert's nickname was the Red Brick, and it took that name for a while, but after a coat of paint it was no longer appropriate so now it's called the Brick.

Inside there's one large open room, ideal for a pre and post match rush, and the counter is packed with taps for the same reason.  On a Tuesday afternoon five Carling fonts are rather more than is needed with just one person behind the bar.

A steady stream of regulars were keeping the place ticking over.  There were two silent racing channels on the TVs but the sound was another sports channel on a telly I couldn't see which was concentrating on the up-coming England World Cup match.  Apparently the England team have had breakfast and lunch today - Who'd have thought it!  (I'd be more interested if we were told the menu!)  Could be worse, though - "Grunt, bonk, bonk, bonk, thirty love".

Yet another recollection from twenty years ago triggered: the "Chinese DVD woman" is still here!  (I didn't buy any.)

Looking round I realised this is a rather impressive room, with decorative finials on the columns supporting the high ceiling with perhaps-original plasterwork.

Going off on a tangent again (This blog is fundamentally just a stream-of-consciousness record of what drifted through my mind as I drank my beer.)  I looked at the fruit machine next to me.  Some of the lights have been replaced by high resolution screens, allowing flashier animations.  Back when I used to play them, "nudge" was a high-tech feature, clearly things have moved on a bit in the subsequent thirty-odd years!

On to the Harlech Castle: 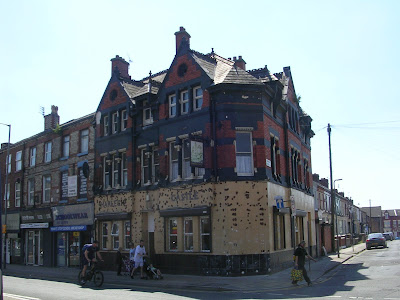 Having failed to find the gents in the Brick, I had to call in first on entering here.  I always expect a dirty look when I do that, but as usual no-one took any notice.  Perhaps I would have got a scowl if I'd gone straight out again.

Behind the tatty exterior this is a two-sided pub, around an island counter, with pleasant plain decor.  There were more drinkers in here than in any place so far today, so that the background music was mixed with conversations.

I see they've got an iron column with decorative finial just like in the Brick, where a wall has been knocked through.

One mystery about this pub:  Why isn't it on the corner of Harlech Street, which is the next street up?  It should be called the Newark Castle!

Back down the side streets, and the Carisbrooke seems to be out of action: 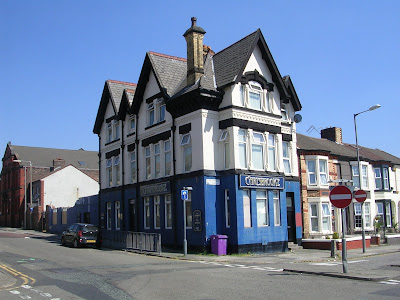 And the Tramway has been closed for years: 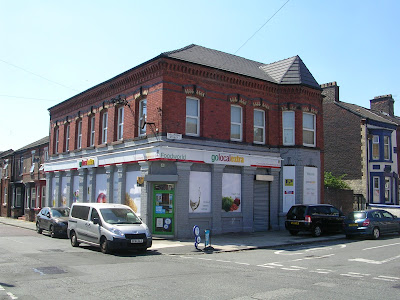 So, on to the Albany: 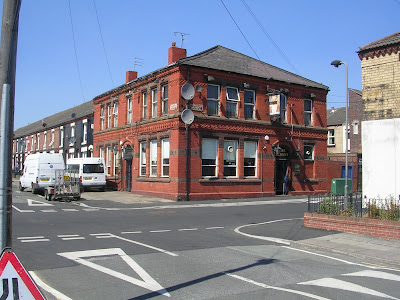 If any out-of-the-way pub should be closed I would have expected this one, purely because of its location but no, it's still going, as a beautifully decorated and well looked after two sided back street boozer.  I did note it closed in 2010 but it is certainly back now.

Four regulars plus me mostly ignored the footie on the telly (Sweden/Switzerland); they chatted and I wrote this drivel.  Apparently, if England get through to the next round the boss is going to put another 10p on every pint!

Amazingly, the hawker here managed to sell two boxes of after-shave, one to the landlady!

The stream-of-thought tends to dry up in the fifth pub, but I did notice the giant digital clock behind the bar, telling me it was Friday.  Surely I haven't been out that long?  How did England get on?
Posted by Phil Wieland at 23:09