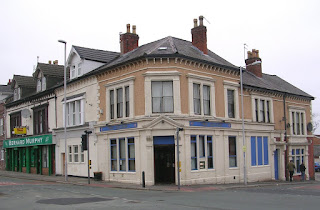 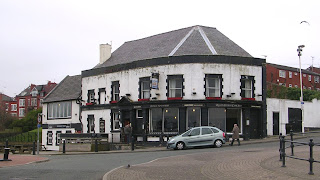 It was only a short walk away from the waterfront to my next destination, the King's Arms. Unfortunately this one was shut as well, and looked to have been out of action for some time. Drat! What to do now? Obviously I should get the map out of my bag and go and find some more pubs to visit, but at this point fate intervened in the form of a 433 bus heading for Liverpool so I wimped out and headed back under the Mersey for a nice pint in Doctor Duncan's before heading home.
Posted by Phil Wieland at 20:36 No comments:

A sunny Friday provided another chance to fill in some of the gaps in my guide, so I hopped on the Merseyrail to Birkenhead Central and then walked up the (steep) hill towards Tranmere.

My first port of call along Church Road was the Beehive where I found a plain well cared for two-sided pub. No real ale, of course, but I settled down in comfort to enjoy a pint of the black stuff and eavesdrop on the cheerful regulars who were discussing a birth in the family, in between popping outside for a smoke.

A little further along Church Road is the Black Horse. Externally I found a rather fine free standing pub dating from 1931 and still looking fairly original. Inside, somewhat plain decor in a well cared for two-sided boozer, with a small gang of lively locals sat at the bar bickering over whose round it was.

Round the corner and on to the Sportsman - a rather good 1920s/30s building I would guess, with a "bullnose" facing the road. Actually, having said that, they were building pubs that look like this as late as the 60s, so I could be miles off. Anyway, as I negotiated the gaggle of smokers at the door I was surprised and pleased to spot a Cask Marque plaque. Only one real ale was available, and I had a spot on, and cheap, pint of Marston's EPA and sat down to examine my surroundings. The interior consists of two large open pleasantly decorated rooms, with windows all round making it very light. Food is under the My Local Pub brand, which I haven't met before, and it looks like good value standard pub fare. They were selling a decent quantity of it, anyway. Incidentally, the pub's web site calls it The Sportsman's Arms, but the large signs on the exterior of the building definitely say Sportsman.

Further research on arriving home shows that mylocalpub.com is one of the Stonegate brands, which also include Slug and Lettuce, Yates's, Scream, Classic Inns and so on.

I continued my beer-fuelled excursion in the direction of Tranmere Rovers' ground, and the Prenton Park pub located at the corner of the ground. Annoyingly I failed to spot the new-fangled Bombardier hand pump and so had another Guinness. This is a pleasantly styled large open pub with two rooms round an L-shaped counter. The upholstery is a bit mauve for my taste, but it's comfy all the same. The place was very quiet on a Friday afternoon, with only a couple of other customers.

Time to head for home, but not without some further research as my walk back to the station included spotting one pub I wasn't previously aware of, and finding another to be boarded up. An excellent day's results, four pubs never before visited taking my score to 1,124, and one new pub discovered taking the total to 1,758.
Posted by Phil Wieland at 15:13 No comments: