I waited at home until England had won the cricket (What an exciting match!) and then headed into town to visit what I expected to be a lot of pubs I'm not going to like.  But let's not pre-judge, they could all be great.  Cains Brewery Village is a complex of bars and restaurants in the former Cains brewery.  I started in Peaky Blinders: 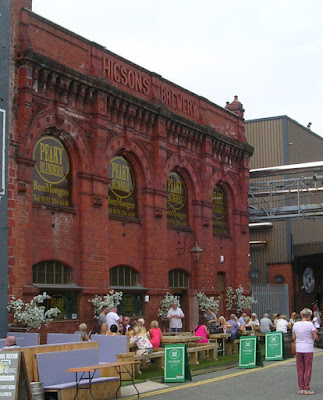 Very different to the Southport branch, this one has the converted warehouse feeling you expect in the Brewery Village, with the original iron beams exposed, and a concrete floor.

I didn't like the look of the handpumps, I bet they don't sell much, so I plumped for a Hoegaarden for a change.  Is it me, or has it been dumbed down over the years?

The place was ticking over nicely, I imagine it'll be packed later.  I managed to find a quiet corner with a very comfortable high-backed chair.  The clientele were all younger than me, I think, and I was certainly the only one sat on his own typing on a tablet!  Not my sort of place, in theory, but actually I like it.

I could see people in the other corner of the room putting on and taking off coats and hats.  What's going on?  I eventually spotted a sign "Peaky Blinders Photoshoot", so I guess fans of the show can dress up and be photographed.  Never having watched it, I can't really comment.

Luckily there is one proper pub here, and the Brewery Tap is as wonderful as ever: 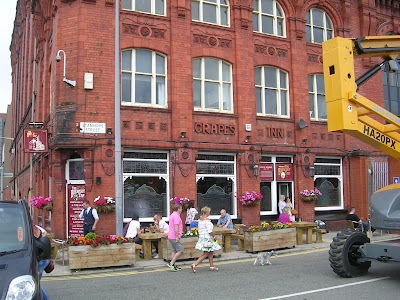 I was a bit concerned by the hen-party crowd in the street, and the fact that all the outside tables were occupied, but inside I found an oasis of calm and real ale.  I selected Reverend James, and it was just what I was looking for, a perfect pint of "best bitter".  The atmosphere, quiet music and gentle chit-chat, was great.

Even in this "proper pub" half the drinks served seemed to be giant goblets of strangely coloured drinks with bits in - I mean gin.

Is it that time of year already?  There was footie on the telly.

Now the complete opposite, the Baltic Market: 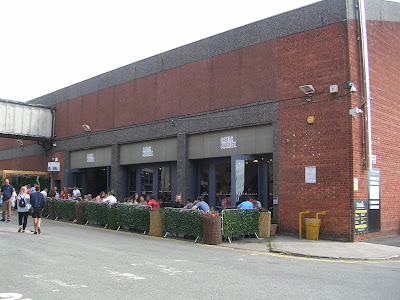 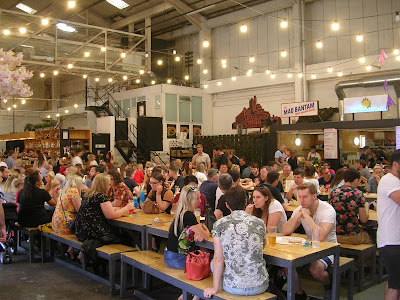 A large high converted warehouse with a bar counter in the middle and a number of food stalls round the sides.

I selected their house lager which came in one of those high grade plastic glasses that feels like glass until you lift it and nearly throw it over your shoulder because it's so much lighter.  I wonder how much these cost, they might be the future.  Depending on whether they're as recyclable as glass.

The place was extremely busy, background music drowned out by the chatter of hundreds of happy customers, most eating.  I managed to find the corner of a table to sit and type this, while people buzzed around me.

I noticed they've got those vibrating hocky-puck gizmos to signal that your food is ready.  Last time I had one was in Queenstown, New Zealand.

Again, not my sort of place, and certainly not a pub, but rather fun nonetheless.  I was the oldest person in here, I'm sure.

Where next?  How about Dock Leaf: 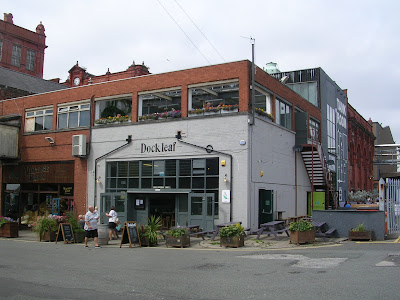 One high room plus more seating upstairs, and a roof garden above.  In the tiled wall of the ground floor room there's a gap in the tiles to reveal the original stone laid by Robert Cain in 1902 when the brewery was completed.

They've kept some of the brewery pipework along the wall as part of the decor, roughly cut off where it turned to cross the room.  I hope the pipe insulation wasn't asbestos!

I had something from Open Gate Brewery here, that's part of Guinness in Dublin, I think.

It seems to be the theme of today; not my sort of place but actually I like it.

On to the Old Gas Station: 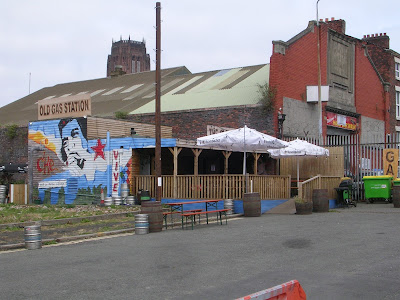 Located just up the road from the main Cains complex, this is apparently a music venue, although it seems too small, but at four in the afternoon its a great place to sit outside under the shade of a giant umbrella and enjoy a half of lager, named Alhambra which I thought was another bar somewhere here?

There's a wafting smell from the barbecue place next door, but I resisted!  The fairly loud music mixed with the cries of the gulls overhead.

One more call, the Tank Room: 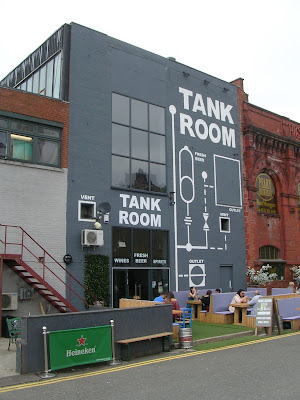 One very high ceilinged room plus a number of tables outside make up this bar where their main output seems to consist of real Czech lager, I had a pint of Krusovice in a proper glass.  The decor is the inevitable faux-industrial lights in a room full of modern-looking steel beams.  This being part of a modern extension to the brewery, the beams don't look nearly as old as those in Peaky's next door.

In the sunshine, most customers were at the tables outside, so I was able to sit in splendid isolation inside and enjoy my lager, while a steady stream of drinkers came in and out.

There are a number of other places for me to visit here at the Village, including Alhambra and Black Pearl: 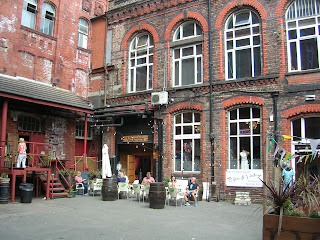 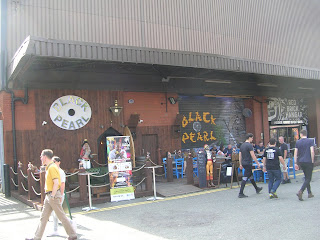 A couple of final thoughts about Cains Village:  The whole place was busy with happy customers sitting outside all the bars on this sunny Saturday afternoon, but I wonder what it's like on a damp chilly February day.  The ability to easily move on to another bar would be less attractive if you need gloves and an umbrella.

On a more positive note, one common theme to the bars I visited today was the quality of the staff.  Without exception they were cheerful, friendly and efficient.  Often, while my drink was being poured another one would ask if I was being served, and in the busier places my order was taken while the previous customer was being served.  You can't ask for more than that!

Another common theme I noticed was the trend towards American-style toilets, i.e. not nearly enough for high-volume drinkers.  I've been in large American bars which only had one unisex toilet where the English equivalent would have a large gents and ladies.  That seems to be the standard here, although since I never had to queue today I can't really criticise.  Perhaps I'm out of date about this, maybe people don't drink as much on a night out as they used to.  I certainly saw plenty of halves, even among all-male groups.
Posted by Phil Wieland at 23:12