Posted by Phil Wieland at 23:21 No comments:

It's Been A Long Wait

When I ended lockdown at ten on Monday morning at the Huyton Wetherspoon's I was not a little disappointed to find that they hadn't got any real ale; "we only tapped it yesterday".  Monitoring the (unreliable) app showed that today they might have a guest on, but I had things to do in town so hopefully I could get something decent.

Having quickly completed my shopping, I headed for the Bridewell.

Arriving on the dot of twelve noon, I was offered a selection of tables; I chose one inside the yard, out of the cold breeze.  The efficient waitress handed me a sign-in slip (Surprisingly, it didn't ask for my phone number) and fetched me my first pint of real ale this year.

I started with the excellent Kirkstall Pale, followed just fifteen minutes later by another of the same.

A brewery delivery provided entertainment as casks were thrown down the hatch, which was in the yard right in front of me, and there was a steady trickle of customers arriving and being allocated tables.  The friendly cheerful staff (It's always been like that here.) were chatting to customers and promptly fetching drinks as required.

I resisted the temptation to just stay here all afternoon, and headed on to the Baltic Fleet.

Plenty of free tables here, but the few in the sun were all taken.  The waitress soon came to take my order, and started the list of real ales, but I stopped her at the first one which was Trappers Hat, a favourite of mine.

Not my ideal pub experience, in a chilly breeze with the traffic whizzing past but the beer was wonderful and, after all, that's why I'm here.

Plenty of empty tables at one o'clock, I hope they're getting enough customers to keep going.  I noted there were quite a few tables under large umbrellas, useful to know if it's raining.

Hypothermia was beginning to set in - Roll on 17th May when we can sit inside - so I headed back towards Lime Street and the train home.  But diverted via the Dispensary.

Here I signed in using the NHS app before being allocated a table.  Once again I didn't get the full list of ales because the first one was Oakham Citra, another of my favourites.

Most, but not all, of the tables were occupied, there won't be much room for more customers.  None of the tables had umbrellas, being your own if it's raining!

Once again a delivery arrived, in this case a truck full of gas cylinders.  Only two for this pub.

Pub of the day: All three were wonderful but I'll choose the Bridewell, simply because it was first.
Miles walked: 2.2

Posted by Phil Wieland at 23:49 No comments:

The latest edition of the book of the guide was published today.  Not really the best time for new version, when I haven't been in a pub yet this year, but at least I had plenty of free time to do the typesetting and so on. 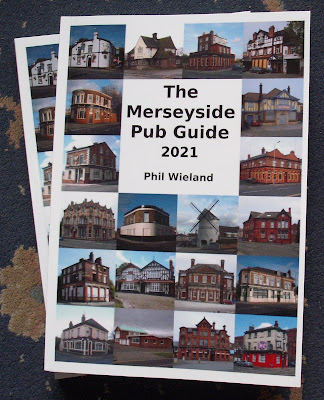 You can order a copy direct from the printer by clicking here.

Posted by Phil Wieland at 19:16 No comments: