A gloriously sunny, if cold, Tuesday saw me heading out of Liverpool on the Southport line and alighting at Hillside station, which is on the south side of Birkdale.  There don't appear to be any hills around here so I wonder where the name comes from.  Mind you, Southport isn't a port so I suppose it's just following local practice. 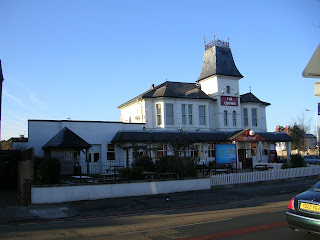 My first destination was to the never before visited Crown Hotel.  I found a very nicely decorated food-oriented chain pub doing a very good trade in lunchtime meals - It seemed like I was the only person who'd come in for a drink.  Unusually, at one end of the very large space was a plainer area with a pool table, the modern equivalent of the bar side.  I enjoyed a spot on pint of Thwaites Wainwright, one of my favourite brews. 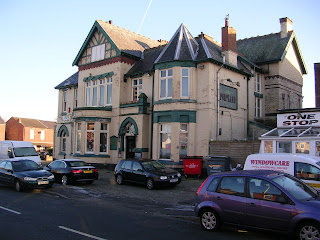 I moved on for another first visit, to the Portland Hotel.  A slightly threadbare appearance on the outside of the building, but once I got inside it was much better cared for, with some good original-looking features in the large lounge side including plasterwork on the ceiling and a fine fireplace.  No real ale, so I settled down with a pint of the black stuff, while the landlord got busy with the dirty job of relaying the fire.  Sadly I was the only customer on a Tuesday afternoon, I hope they get a lot more later. 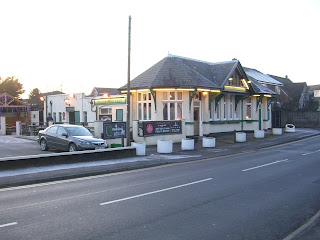 A stroll through the centre of Birkdale itself took me to the Good Beer Guide listed Fishermens Rest, another standard food-led pub.  The large partially knocked-through interior was busy with diners as I sat on a very comfy sofa with another pint of Wainwright.  The menu looked rather good, and seemed a little cheaper than most.  Unusually for this sort of pub, meals are paid for at the till after you have eaten.  The staff all seemed particularly efficient and friendly, which I'm certain must lead to plenty of repeat custom.
(No complaints about apostrophes please, the pub name on the signs is rendered as I have shown.)

For my final stop I headed back towards Birkdale station and to the Park Hotel.  Another food-oriented chain pub with lots of people dining, but there were also a number of regulars in for drinks and friendly chit-chat.  They've painted over much of the dark wood panelling which I noted in 2004, and my comment about this making the interior a bit gloomy no longer applies.  Another great pint of Wainwright for me, it seems to be very popular hereabouts.
Sorry, no photo as it was getting dark by this time.

In summary, a pleasant excursion with some decent pints in pleasant surroundings, and the total of pubs researched goes up to 1,142.
Posted by Phil Wieland at 23:27 No comments: