I chose a rather grey muggy day yesterday to head under the Mersey to the sea-side at New Brighton.  I was surprised to find the waterfront has been substantially redeveloped, with new restaurants, a supermarket and a casino, but I ignored all these attractions and headed first to the Queens Royal Hotel.  The outside was off-puttingly covered in scaffolding, but the hotel bar merits a Good Beer Guide entry and so obviously needed visiting.  I found a very comfortable nicely decorated bar with four hand pumps and I enjoyed an excellent pint of Hawkshead Windermere Pale.  The menu looked good, but I resisted.

I continued my stroll round the sea front and then turned towards the town centre, passing Redcaps, now closed, before calling in to the Ship Hotel.  Definitely the down-market end of spectrum, a little scruffy inside but still clean and tidy.  They'd run out of Guinness (except in cans) so I had a lager for a change, and sat on a comfortable sofa watching a steady trickle of regulars coming in and out.  This is undoubtedly a local pub for local people, everyone who came in knew everyone else and the two bar staff.

Next, on to the Commercial, but it isn't called the Commercial any more, it's now the Harbour.  Nothing much else seems to have changed, there's a small bar side with a couple of bits of peeling paintwork giving it a slightly tatty feel, and in great contrast a well appointed and well cared for lounge side.  This used to belong to Cains Brewery but was sold off in one of their financial crises.  The four hand pumps were only offering one real ale and I had a spot on pint of Black Sheep.  Apparently the best route from the bar to the gents is via the street! 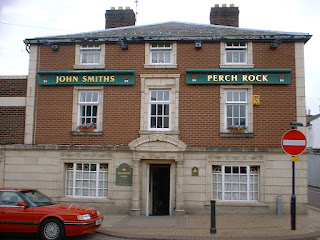 Just across the road from the Harbour is the imposing building that houses the Perch Rock.  I remember when I last visited, in 1999, being served a pint of pure vinegar which purported to be John Smith's cask ale.  This time I had Otter Bitter and it was excellent.  The pub has a rather odd layout with a very narrow front bar across the front of the building.  My 1999 visit recorded two lounge rooms behind with no bar counter but I have to admit I didn't go and check these this time.  Instead I sat in "Bob's Corner" at the end of the bar, luckily Bob wasn't in.  Once again, a local's pub, everyone in the busy bar knew everyone else.  (Cheat - This picture was taken on a previous trip some years ago!)
Posted by Phil Wieland at 10:32 No comments:

A workmate was looking at my pub guide and asked what I thought of the Cavern Pub, and I had to admit I'd never been in.  So after visiting the blood donor centre today I headed down to Mathew Street to check the place out.

And I found a rather good cellar bar with walls covered  in music memorabilia, with, much to my surprise, two hand pumps on the bar.  Not the sort of place I would expect to find decent beer, but I enjoyed a spot on pint of Black Sheep.  The barmaid had apparently never used a hand pump before, and she had to get instruction from her colleague.  There's a stage for live music, but no-one was performing on a Thursday afternoon.

Just a little way along Mathew Street and I was in for another surprise - A brand new pub called Glass Onion, where the board outside advertised bitter, lager, Guinness and mild all at £1.50 a pint!  Inside it is a plain corridor bar and as you can imagine at these prices, the customers are a little on the down-market side.  There weren't actually any fights while I was there, but there were a couple of vociferous arguments!  I sat unobtrusively in the corner, getting a little worried when the seven foot tall (OK, a slight exaggeration.) bloke who the barmaid had just annoyed by refusing to serve him sat down next to me.  He soon left to try another pub.

It must be a good few years since Guinness was available at this price.  Can they really be making a profit?

I was trying to remember what was here before, and a quick Google seems to show that it was formerly part of Hardy's, which now has a shorter frontage, I think.
Posted by Phil Wieland at 19:53 No comments:

Caesar's Palace, the long standing restaurant at the bottom of Renshaw Street, has been carved in two.  The larger part is a refurbished restaurant, now called Caesar's, and the smaller part, nearer to the Adelphi, has become a new pub called Inn.  The decor, turquoise seats, brushed aluminium surfaces, slate wall panels etc. etc. makes the place look like a trendy bar, but further examination reveals that it's definitely a beer oriented pub.

The three hand pumps offered two beers from the Liverpool Craft Brewery, and a real cider.  I enjoyed a dimpled mug of Summer Ale, which to be honest didn't seem very summery, just a nice bitter.  A long line of fonts offers a wide range of less common beers from Europe and America and if that's not enough choice for you, the beer menu lists umpteen bottles.

As I sat in splendid isolation - I was the only customer on Wednesday lunchtime - I eyed up the array of empty beer bottles on a high shelf.  Not bad, but the collection in my hall is better!  I turned my attention to the bottles behind the bar, and spotted some Sink The Bismarck from Scottish brewery Brewdog which at 41% (No, I haven't missed a decimal point, that's forty-one percent alcohol.) claims to be the strongest beer in the world.  Unfortunately they'd sold out, so I still haven't tried it.  (I was in Brewdog's own bar in Manchester on Saturday and they'd run out as well so I had to settle for a 32% brew instead.)

So, in conclusion, a rather good attempt at doing something different from the standard plastic pub that we see all over the place.  Let's hope it's a success, but they need to get more customers through the door - Perhaps when the redevelopment of Lewis's across the road is completed more people will come in here.  Another notch on the stats, taking the score of Merseyside pubs visited to 1,134.