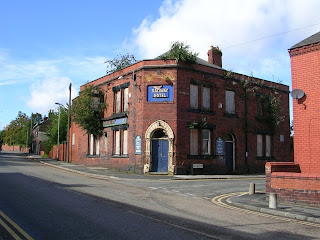 A convenient coincidence meant I could do research for both my blogs (The other is Northwest Sparks News by the way.) at the same time, so I headed for some pubs in Thatto Heath, starting with a quick look at the Railway Hotel which has been closed for at least two years.  I had a drink in there in 1999 when it was a Greenalls pub.  In common with many of their outlets, it had a bowling green at the back. 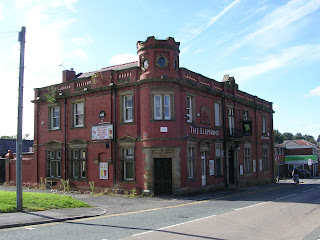 Just a short walk round the corner to The Elephant, a rather imposing building containing a plain clean and tidy interior.  When I last visited, in 1999, this was a two bar pub but now it's been fully knocked through into one large L-shaped room, although one end still seems plainer than the other.  No real ale, so I had my usual pint of the black stuff. 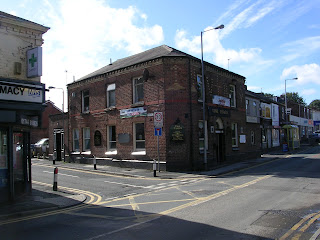 Very close to the Elephant is the externally less impressive Vine Tavern.  Inside is a classic two-sided boozer with no access between the halves except via the gents.  The plain bar side had a cluster of cheerful regulars sitting at the bar whiling away a Friday afternoon.

The review from my previous visit grumbled that "The 'Cask Ales' sign would appear to be a lie".  I was surprised to discover the sign is still there and still wrong thirteen years later, so it was another pint of G. 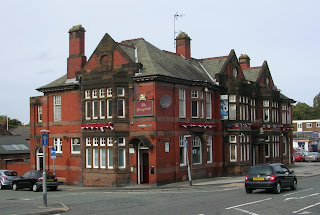 Back to the station and, next door, the Springfield.  This impressive building contains a large two bar pub pleasantly decorated inside, with dark wood panelling on the bar front.  In the plain bar side a couple of regulars were playing pool, and there were one or two more customers in the lounge end I think.  The trophy cabinet was well filled.  Again, no decent ale so it was yet another Guinness.  (This picture was taken in 2010.)

All three pubs were ticking over on a sunny Friday afternoon, a little surprising considering they're located within 1/4 mile of each other.  They all had the "local pub for local people" feel, where everyone in the pub (except me) knew each other, but they seemed to have no objection to a stranger coming in and jotting in a notebook.  All three were last visited in 1999, so long overdue for an update!
Posted by Phil Wieland at 23:01 No comments:

A sunny Saturday, so time for a jaunt across the water, via the refurbished Central Station.  How many million pounds?  For a few white tiles and some white paint?  On the plus side I was very pleased to note that the toilets have been expanded and are still free, these are often useful on the homeward journey after a pub survey, and I object to paying 30p at Lime Street. 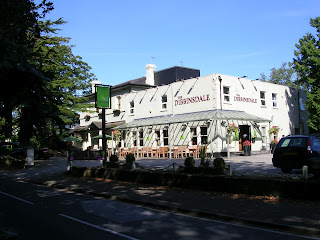 Anyway, on to Bromborough, round the corner and into the leafy suburbs, to the Dibbinsdale, a very pleasant looking pub/restaurant/hotel belonging to Thwaites Brewery.  The inside is good as well, with lots of wood panelling and leaded glass, some of which looks like it might be fairly new.  The place was deserted early on a Saturday afternoon, in fact by the time I was half way down my pint of Wainwright the other customers had all left.  Hopefully just a coincidence! 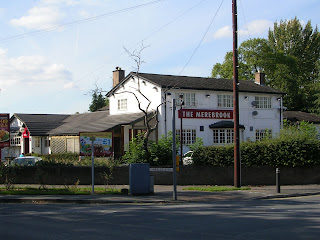 Next, back past the station to the Merebrook.  A nicely decorated pub in the "sizzling" chain, much busier than the Dibbinsdale - perhaps because the food is significantly cheaper.  Most of the other customers were families out for a meal.  I had a fine pint of Marston's EPA and watched the busy staff rushing about with plates of food.

My next destination was the Knockaloe.  The Hall was built in the 1850s and was donated to the council for the use of the community in the 1930s.  Later it was sold to Octel to be their staff sports and social club.  In 2006 it passed back to private hands and became a social club open to all.  As well as the popular bar there are function rooms, squash and tennis courts, football pitches, and so on.  I was a little concerned that the bar had been removed from the Good Beer Guide this year, but I needn't have worried, and I enjoyed a spot on pint of Tetley.  The other two real ales available were from the local Brimstage Brewery. 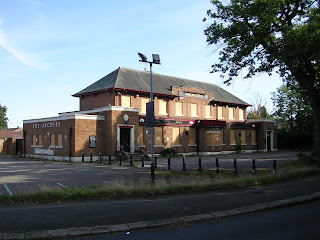 The final pub of the trip was something of a disappointment, and I seem to have arrived a few months too late for a drink in the Archers.

Never mind.  Three pubs never before visited taking the total to 1,140.  Time to head for home - Via the facilities at Central.
Posted by Phil Wieland at 22:53 No comments:

On a sunny Thursday I took a trip to Toxteth to see how the pubs there have been getting on since my last visit, which was 2004 I think.

I began with a bus ride along Park Road, where I found the Royal Oak is now closed and tinned up, the Globe remains open, and then the Farmers, the Toxteth, the Royal George and the Queens Head are all closed, and in some cases gone without trace.   A little further along, the Pineapple is still open.  I've drunk in all these pubs at some time in the last fourteen years, it's a shame so many of them aren't there any more. 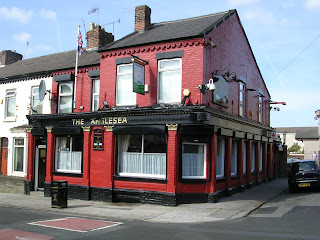 I headed down towards the river, passing the still open Anglesea, which is looking pretty tidy from the outside. 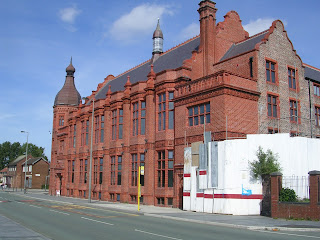 I paid a visit to the amazing Florence Institute, which was open as part of the Heritage Open Days scheme.  This stunning building, constructed in 1889 as Britain's first purpose-built boys’ youth club, was derelict last time I visited the area, in 2004, when I recall it had trees sprouting from the gutters.  It has been wonderfully restored and is once again in use as a community resource. 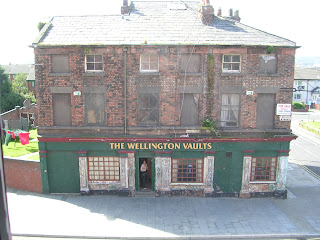 Just across the road from the "Florrie" is a very tatty looking building, housing the Wellington Vaults, which rather to my surprise was open.  I joined two locals in the small front bar and enjoyed a pint of Guinness.  The inside was a lot tidier than the rather tatty exterior might suggest.
The Derby Arms and the Great Eastern were both near here, but are no longer extant.  Again, I've drunk in both in the past. 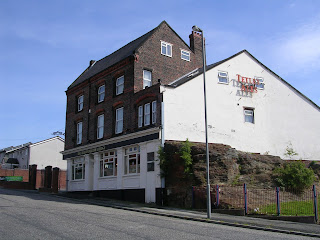 Just a short walk riverwards took me to the wonderful Herculaneum Bridge, also known as Pegleg's.  Outside, a coat of white paint has replaced the somewhat garish blue and red colour scheme of my previous visit.  The interior, although a little chaotic during decorating work, is very impressive, with lots of ceramics on the walls and a fine wood and leaded glass bar back.  It retains the historic layout of rooms off a corridor served from a hatch at the back of the bar.  The large back room also has a tiny bar counter in the corner. 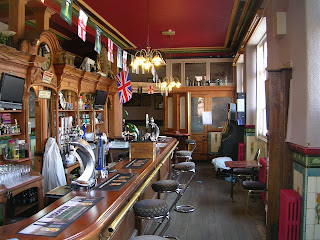 I was the only customer on a Thursday afternoon, sharing the bar with two friendly staff and a decorator.  They also do accommodation here, apparently it's very popular with visiting football fans. 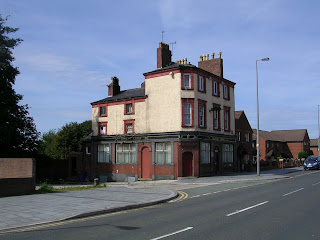 I wandered on past the closed Mosely Arms, Clancy's which has completely disappeared, and Dick Jennings where the planned conversion to housing hasn't progressed. 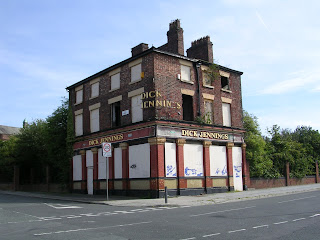 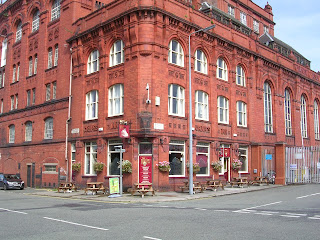 My next destination was the Brewery Tap, nestled in the corner of the Cains' Brewery, where I enjoyed a fine pint of Cains' FA.  I noticed they limit their real ale offerings to their own brews now, I'm sure they used to have guest beers as well.  Sales were pretty slow, initially I was the only customer but a few others arrived to sit outside in the bright sunshine. 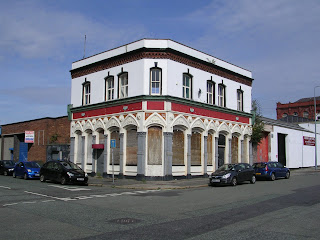 Finally, I strolled past the long closed Angel (pictured) and on to the Coburg.  Reports had reached me that this place now did real ale, and I was pleased to find Fuller's London Pride on sale in a comfortable, friendly pub.