A grey drizzly Thursday saw me nipping under the Mersey by train to Bidston station where the diesel Wrexham service is allowed grudging access to a few yards of Merseyrail track.  I took the diesel unit just one stop to Upton where I noticed the rather tatty Seven Stiles located by the station has been refurbished and renamed Fender.  I wonder where the odd name comes from, I thought, until I checked my records and found it's on the corner of Fender Way.  Anyway, I was heading in the other direction, towards the pretty village of Upton. 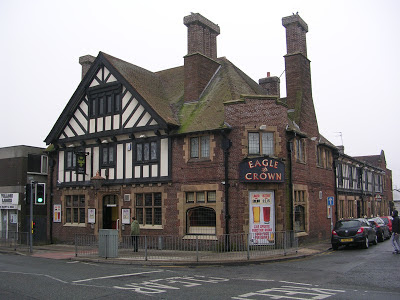 The first pub I came to was the Eagle & Crown which is in a very fine 1920s (I guess) building.  Just look at the size of those chimneys!  Sadly, going inside I was disappointed to find a fairly plain and ordinary pub interior, knocked through into one L-shaped room.  No real ale was available so I ordered a pint of Guinness and sat down to listen in on the half a dozen locals chatting at the bar. 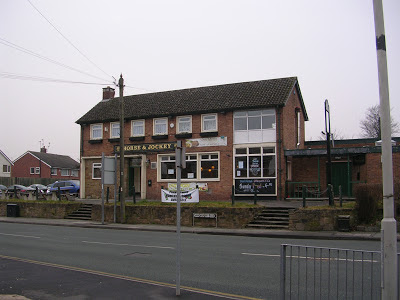 Just a minute's walk away is the Horse and Jockey, which looks rather worn outside and in.  The plain, slightly threadbare interior consists of one large knocked through room.  Guinness once again for me as no real ale was available.  The place was pretty deserted, with just a few regulars sitting at the bar, and three youngsters - they needed passports to buy drinks - in one corner. 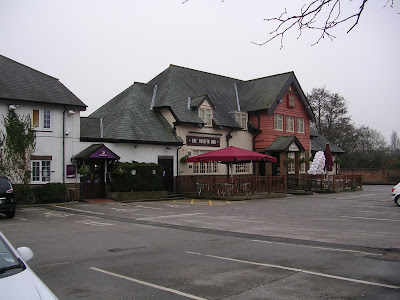 When I visited Greasby last year I missed out one pub, The Twelfth Man, because it's actually nearer Upton, so now was the time to head westwards and try this one out.  I found a large pleasant pub attached to a Premier Inn, and was pleased to see a Cask Marque sign by the door.  Inside, bare brick and wood beam decor, all fake I suspect.  I chose a pint of Spitfire.  They concentrate on food from the Fayre and Square brand and were doing a steady but slow trade, mostly of diners, on what was by now a rainy Thursday afternoon.

Posted by Phil Wieland at 22:00 No comments: 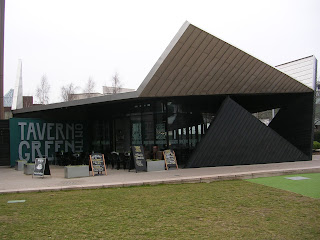 A visit to a few locations in Liverpool City Centre, starting with the Tavern on the Green which is part of the Liverpool 1 redevelopment.  Inside this peculiar building the interior is also a little odd.  The distressed varnish on the wooden floor looks a lot older than the two and a half years the pub has been here.  Perhaps the boards were second hand.  Old wooden tables and chairs adds to the old pub feeling, in marked contrast to the contempory style of the battleship grey walls and naked plywood ceiling.  Altogether, a quite attractive ambience is created.  On a Wednesday afternoon there was no atmosphere, as I was the only customer for most of my stay.  Two handpumps were on the bar, one had a Jennings' Cumberland clip turned round, and the other provided a fine pint of Marston's EPA.  Eventually a few other customers came in to boost the takings.

Next, to Leaf on Bold Street.  I quickly obtained a spot on pint of Lancaster Bomber, found a vacant table and settled down for a good look round.  Oh my goodness, it's a whole different world here on the artistic side, and I felt very out of place amongst all the arty types, most of whom were sipping tea of various peculiar colours.   Far be it from me to offer fashion advice, but I always feel a flat cap on anyone under sixty years old is a mistake, and wearing one while sat at a table in Leaf just looks stupid!  Anyway, returning to the factual, a small stage is located at one side of the large open room.  There's another large room upstairs which was in use for some event or other, which meant that downstairs was pretty busy, I saw some people standing waiting for a free table.  In conclusion, not my sort of place but I can't fault the quality of the ale.

Just round the corner is Bier which used to be The Old Rope Walk.  I visited here not so long ago and found no changes this time, with an array of hand pumps offering a good choice of real ale.  I selected Ringwood's Boondoggle, one of my favourites.  Trade was quiet but ticking over gently.
Posted by Phil Wieland at 21:00 2 comments: