I wasn't sure whether today's research merited a blog entry, but once the above pun occurred to me I couldn't resist.

Finding myself in St Helens I decided to take a stroll eastwards in the bright sunshine, to an area I've never visited before, namely Parr.  I bypassed the pub or pubs in Pocket Nook and was soon in an area called Parr Stocks, where I quickly found my first pub.  Unfortunately, the Oddfellows Arms was boarded up, although as a slight silver lining it was missing from my guide, so at least I gained a new entry, albeit one that says "Not visited". 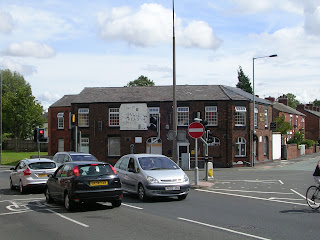 I continued my walk, and soon the Bulls Head appeared in the distance.  As I got closer it became apparent that this pub, too, was out of action.  Hmph! 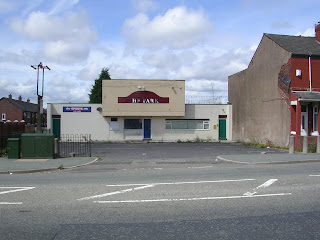 I walked on, increasingly thirsty in the hot sun, and soon came to The Park.  Another closed one, and the fact that once again this was new to the guide was scant compensation for my disappointment. 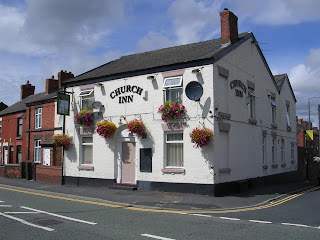 I marched onwards.  The Church Inn looked promising with its pub sign still intact and the hanging baskets outside, but it was shut.  Hard to tell whether it was just closed on a Thursday afternoon or whether it's permanently closed, but the lack of signs in the windows and the blank blackboard led me to suspect it's the latter. 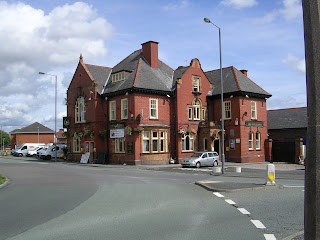 Further on, I found the Horseshoe - A rather fine pub building beside a roundabout.  My initial hopes of getting a drink seemed in vain when I spotted the row of builders' vans in the car park, and heard the sound of drilling from inside.  But wait!  There's an open door at the side.  I entered the porch and gingerly opened the inner door half expecting to find dust sheets and pots of paint, but - yipee! - the bar side was open and operational.  It looks like they've already refurbished in here, as I noted pleasant plain decor, newly covered seats, etc. etc.  No real ale so I made do with a pint of Foster's.

Having enjoyed my pint in the quiet comfort of the bar I decided I'd had enough failures for one day, so I headed to the bus stop for a bus to Earlestown, from where I could get a train home.  And, surprise surprise, the bus had only gone a short distance when we passed the Engine Inn, another new one to my guide, and also boarded up.

So, as the title of this entry suggested, a rather under par score for a visit to Parr:  One pub visited for the first time, taking the total to 1,153, plus three new entries making the number of pubs listed in the guide 1,779.
Posted by Phil Wieland at 21:41 2 comments:

Blood donors again, (I wonder if I should ask them to sponsor this blog?) so I headed for a couple of pubs on Mount Pleasant which were long overdue for a re-visit. 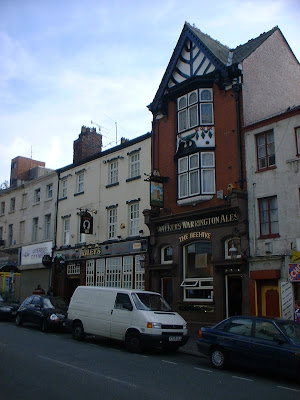 Here's a picture from 2002 of the pubs in question.  Apparently I took a picture but didn't go in, because in both cases the last visited date is in the last millennium.

First came Riley's - It is fifteen years and four days since I was last here.  The first thing I noticed on entering was the rather striking flowered wallpaper which helps create a bright cheerful feeling to the place.  I spotted a single hand pump offering Higsons Bitter but, unusually for me, decided not to risk it - I've come across too many off pints, especially in warm weather like we've been enjoying recently.  So I stuck to good old reliable Guinness.  The rather old-looking bar back with carved wood and leaded mirrors included a sign "Est. 1991" so perhaps it's not as antique as it appears.  The regulars were mostly racing fans, watching the many TVs scattered about the place and occasionally nipping out to place a bet.  I might have been right about the real ale, because no-one ordered any while I was there.

I moved next door to The Beehive, where I found a single room with a splendid high plasterwork ceiling with the details picked out in red and gold.  Behind the bar the chimney breast is covered in decorative ceramic tiles, with a painted glass centrepiece.  There's also original-looking cut glass in some of the windows.  Once again, racing on the TVs seemed to be the main attraction for the regulars.  I noticed the CCTV images visible behind the bar were the same as in Riley's - It would seem that the two pubs have a shared smokers' area at the back.  [The original version of this report described it as a "joint smokers' area" but I realise that is capable of misinterpretation!]

When I arrived the pub was quite busy, and I had to stand for a minute before I could get a table, but while I drank my pint everyone left, and by the time I had finished there were only four customers and the barmaid was going round picking up litter and wiping the tables.  I hope it wasn't something I said.
Posted by Phil Wieland at 20:34 No comments: