The weather was bright sunshine as I made my way to Wallasey for a walk into the middle of nowhere by the sea, where I found the Derby Pool, a pub I only discovered yesterday thanks to whatpub.com: 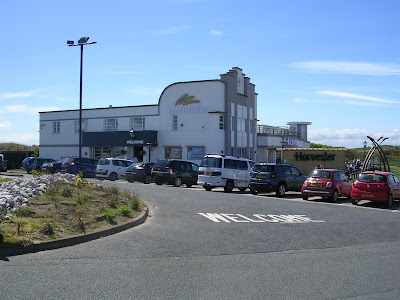 The terrace outside was popular in the sunshine, inside I found very well done contemporary decoration in this former swimming pool.

The real ale choice was limited to Doom Bar, but it was in fine condition and served in a Doom Bar glass, much better in my opinion than a choice of four tired ales.

I sat in a quiet corner and watched a steady stream of customers coming in.  They seemed to be about 50/50 diners and drinkers, with most of the drinkers heading outside to enjoy the sunshine.

The Derby Pool was a popular attraction for locals and tourists, a large open air swimming pool with art deco buildings built in the early 20th century.  It was named after a nearby racecourse built in the 17th century by the Earl of Derby.  The racecourse is long gone, and the pool closed in the early 1980s after suffering repeated storm damage.  Luckily the buildings were saved, and now form this pub.

The quiet muzak moved on to "Seasons In The Sun" so it was time to go!

I strolled back to suburban Wallasey, and the Nelson: 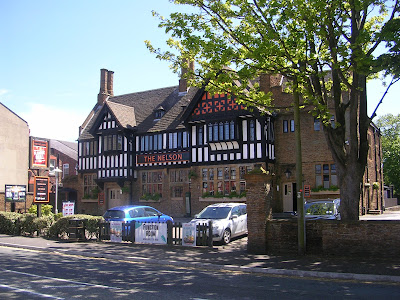 This splendid example of brewers' Tudor looks a little out of place in a suburban street.  The inside is well done, it has been knocked through creating one open L-shaped room, pleasantly decorated.  Some bits of original wood panelling and ceiling plasterwork have survived.

Operating under Greene King's "flaming grill" brand, they are aiming at diners, and most of the handful of customers at two on a Tuesday seemed to be here for the food.  A couple of GK brews were on handpump, plus Doom Bar.  My pint of IPA was perhaps a trifle warm but otherwise spot on.  Remarkably, it cost only £2.19.  (And the food looks very good value as well.)

On to the Farmers Arms: 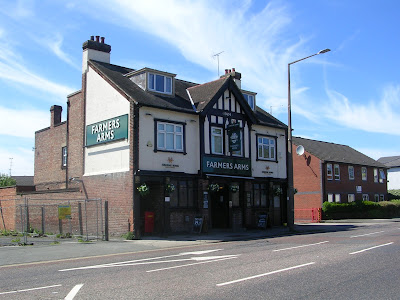 In a beautiful interior with lots of original features, I sat in a lounge served from the side of the servery across a drinking corridor, where I was surrounded by original wood and leaded glass work.

My pint of Anchor from Titanic, assiduously topped up by the friendly barmaid/landlady, was not bad, but perhaps a little past its best.  (Writing this blog I often worry about the terms for the people behind the bar.  It's a bit insulting to refer to a landlord or landlady as barman/barmaid and it's often hard to tell the difference during a brief visit.)

The background music mixed with the chit-chat of the regulars.  Eventually, two of them joined me in the side lounge. 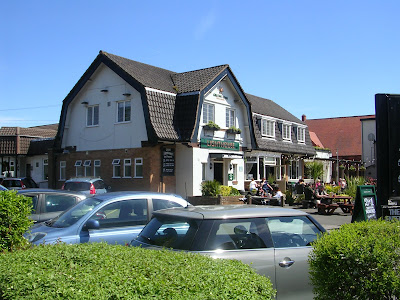 Good grief, Greene King seem to be taking over the world, that's three out of four today!  This one has the "Time well spent" branding.

Inside the large classic sixties or seventies pub building I found a thoroughly knocked through and modernised interior.

At the bar, I was surprised to find not the "standard" GK selection but, along with their IPA, a number of guest ales, and I selected something from Speke's Big Bog Brewery.

Although clearly aiming for diners, most of the handful of customers inside at three were drinking, I think.

I noticed an old fella who was fast asleep with a half-finished pint of cider on his table.  Actually, having said "old" he probably wasn't much older than I am, perhaps that'll be me in a couple of years time?  Or a couple of hours time?
Posted by Phil Wieland at 23:20