After a somewhat disrupted train journey (Another Delay Repay claim is in.) I eventually reached sunny Southport.

I started my researches in Cambridge Arcade, but not for me the excellent ale in the Tap and Bottles.  No, I had to do the Hungry Monk next door: 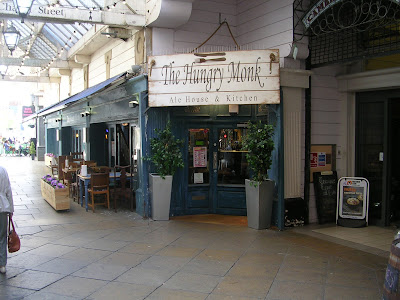 Here I found a rather quaintly decorated restaurant with a good selection of keg beers on the bar.  I had a Blue Moon for the first time, not as nice as Hoegaarden in my opinion, and it definitely doesn't need that slice of orange in it - why do they do that?  I've been seeing this beer on tap more and more often in all sorts of places, but I've never seen anyone drink any!

By the way, while I'm writing about beers, I had a pint of Titanic Cappuchino yesterday.  Although I'm generally fond of unusual beer flavours I have avoided coffee ones after I had one I really didn't like years ago.  I don't know why I suddenly decided to break that rule yesterday but I'm glad I did because this one was gorgeous - A beer of the year, I think.

A steady stream of dining customers were keeping the waitress busy and I must say the food smelled good!

Next, on to Lord Street and another crucial "In the GBG but I've never been" place, Peaky Blinders: 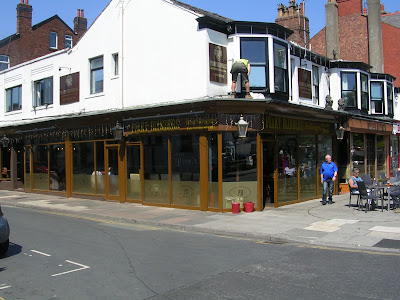 (I don't think the painter was deliberately attempting to photo-bomb my picture.)

By the way, there are still four more Good Beer Guide entries for me to visit before I've done them all, which probably puts me behind many of the more well known pub tickers, such as Retired Martin and BRAPA.

This is a very pleasant modern place where the large shop windows make the inside very sunny.  I bet it's not so good on a stormy January day!  Not very busy on Tuesday afternoon, and most of the dozen or so customers were sitting outside in the sun.  Inside, just three of us.

I didn't see any other cask served from the five handpumps while I was there, but my pint of Landlord was good.

They've got another branch down in the "brewery village" or whatever the area round Cains brewery is called, I'm told there are umpteen bars there that I need to check out.

Directly across Lord Street is Punch Tarmey's, and the Cask Ales sign drew me to another never visited tick: 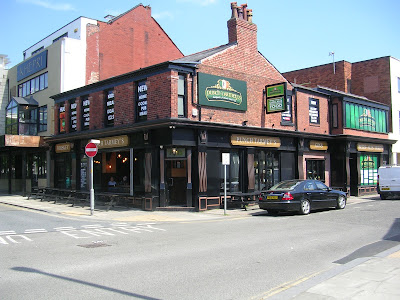 A rather good Irish pub here, with a boxing theme to much of the decor in the totally fake but well done interior.  I guessed Punch Tarmey was an Irish boxer, but a quick Google suggested it's a totally made up name for a chain of Irish pubs.

Six handpumps on the bar, with four having clips, and I selected Salopian's Gold, which was spot on.

The menu on the table suggests food is an important part of the business, but a hand-written sign at the door said "No food today".

I noticed the barman was wearing a shirt which was branded for the Bold Hotel across the road, so I guess they own this place.

Only about three other customers were here so the soundscape was piped music and the traffic outside.

I was intrigued by the "dimple" pint mugs used as candle holders on each table, the lower half is white with melted wax, and the upper half smokey black.  Better than using them for beer, anyway!

Next, across Lord Street again, to the Corridor Bar: 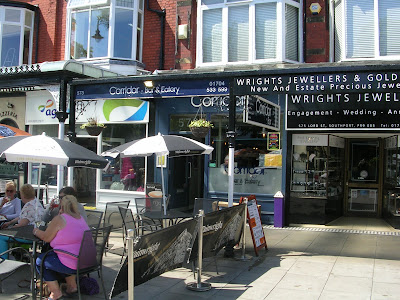 This place lives up to its name, and is a very long narrow room, with a counter along the back half.  Once again the vast majority of the customers were sitting on the tables outside, in fact I was alone in choosing a bench seat indoors.

Four handpumps offered a range of ales I'd never heard of, the one I chose was in perfect condition.  I looked at the menu on my table and I must say it looked rather good value, although no-one was eating while I was there.  After I'd typed that, someone made a complicated food order which was efficiently handled by the staff.

The best piped music of the day, I think, including Bowie and Thin Lizzie.
Posted by Phil Wieland at 23:45