Contrary to the poor weather forecast I left home in bright sunshine.  It was raining gently by the time I reached Kirkdale.  My first target, the Knowsley, was shut, I think permanently: 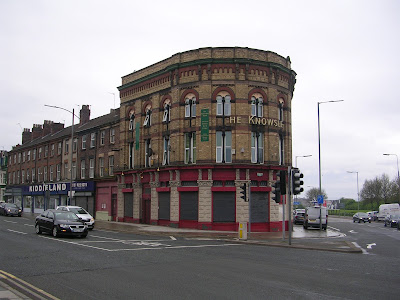 Something seemed unfamiliar as I approached the Saddle Inn: 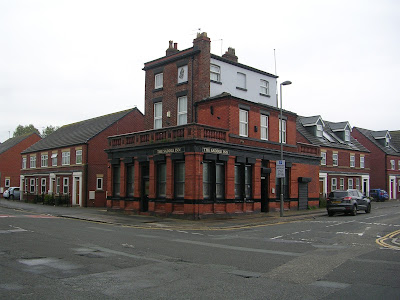 It took a while for me to realise that last time I was here it stood alone in the middle of a large area of waste ground.  Now, houses have been built around it.  Luckily, in the middle this gem survives.  Inside some original features remain, including corridor ceramics, and leaded glass in the wooden partition which separates the corridor from the bar room.  The lounge is served via a hatch in the partition.

The keg bitter was not one of the common three - Tetley, John Smiths or Worthington.  Instead they've got Trophy - I didn't know it still existed!

Not surprisingly, I was the only customer at two on a damp Tuesday afternoon.  Two different racing channels on the TVs and Smooth on the wireless, both at low level, were the only sounds as I sat in the peaceful well maintained bar.

Next, the New Halfway House: 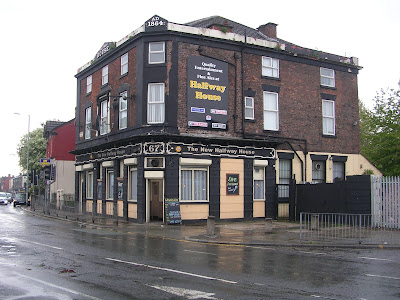 I've not been in here since 2003 when it was a member of the Dickie Lewis chain.  Not much has changed since then, it remains a pleasant friendly well looked after two sided boozer.

Unlike the Saddle, there were a number of customers in here, so quiet  chit-chat was the dominant sound, with muzak in the background.

By the way, for non Liverpudlian readers, Dickie Lewis is the nickname for a "well endowed" statue located over the entrance of Lewis's department store in Liverpool.  (He's also the "statue exceedingly bare" in the song In My Liverpool Home.)  A bar across the road took this as its name, and later a chain of down market pubs all over Merseyside became Dickie Lewis's.  I think the chain has gone now, and all the pubs have lost the name. 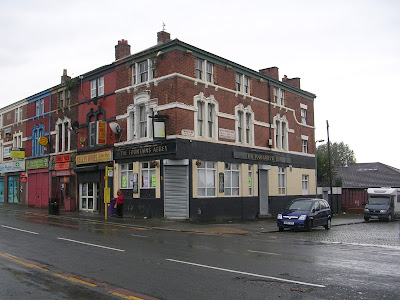 I walked on, getting wetter in the rain, to the St Hilda: 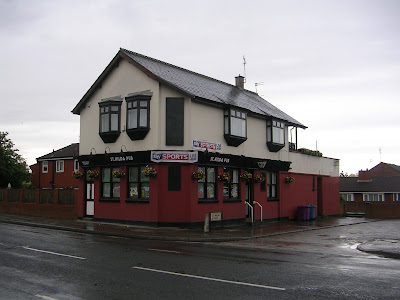 My notes from 2004 included the word grubby.  Definitely not the case nowadays, like almost every pub it's well cared for and spotless.

A handful of regulars were making plenty of noise, banter and chit-chat drowning the background music.  Good grief, is that the Bay City Rollers?  I think it is!

There's a tiny stage in the corner of the front room, just enough space for karaoke or a singer, but not a band.

Bradley's (formerly the Pacific) looks to be closed: 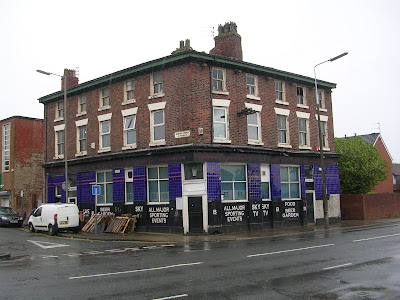 I carried on to the Clock: 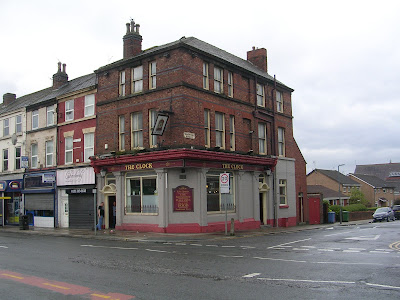 In this friendly two-room pub the music was turned up a little, mostly drowning the chatter of the three regulars, who were stationed at opposite ends of the bar and consequently had to shout at each other.

Two more locals came in while I drank, keeping the pub ticking over.

A sign advertised cask ales, and there were two handpumps on the bar, but they were clearly out of use.  Perhaps on match days?

I've got a guilty secret fondness for over the top country music, and Coward of the County followed by You Picked A Fine Time To Leave Me Lucille was the best music of the day!

It's a long time since I've seen a Guinness and black served in a pub.

Apropos of nothing, I was thinking I never get any stares when I'm writing on my tablet in these pubs.  This seems a bit odd, as I occasionally got a reaction when writing in a notebook years ago, including being accused of taking notes for "the social", in a pub just up the road from here.  My theory is that most people have a child or grandchild or nephew/niece or whatever who spends lots of time playing with a tablet, so it's just "normal" and they don't see it as a threat, unlike a notebook.
Posted by Phil Wieland at 23:42