New Ones in Liverpool

I have been neglecting the many new bars in Liverpool itself, so I thought I'd do a few on a Saturday afternoon.  I started at the decidedly unexciting exterior of the Black Lodge Tap Room: 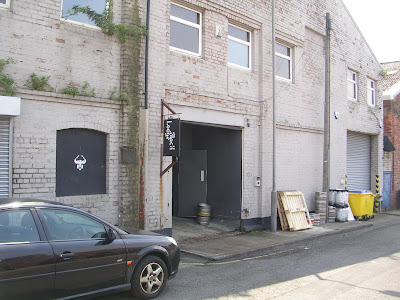 Inside, I found a bare room converted from an industrial unit I guess.  There's a small brewing kit at the back and side of the room - Is that all they need?

I selected a 2/3 of a very tasty Blueberry Stout, from the choice of about ten taps.

There were a couple of customers on the tables in the street, and two more sat at the bar chatting to the barman.  Other than those the place was empty, perhaps unsurprisingly just after opening on a Saturday afternoon.  I imagine it's a lot busier later - I hope so, anyway.  Not really my sort of pub, I must say, but they brew and serve quality beer if my sample was anything to go by.

On to the Refinery: 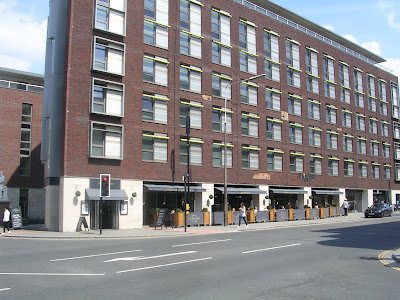 Once again, not my sort of place, but worth visiting for the guide.

Occupying the ground floor of a large plain new block, this is a pleasantly decorated up market place aiming at selling food and expensive cocktails.

On entering, I spotted three handpumps but with no clips so I selected Meantime London Pale from the small selection of keg taps - The Guinness was out of service.

Having sat down I spotted there were three more handpumps at the other end of the bar - obviously I give up too easily.  Later, two women ordered real ale and judging by the palaver, involving two bar staff and a visit to the "cellar", I was probably better off with my tasty keg.

The large open room was fairly empty, with most of the background chatter coming from one large party.  (The tables outside in the sunshine were much busier.)  There was a steady stream of cocktails and bottles of fizz leaving the bar.

Now, on to the prime objective of today's trip, one of those annoying "In the beer guide but I've never been" places, Hard Times and Misery: 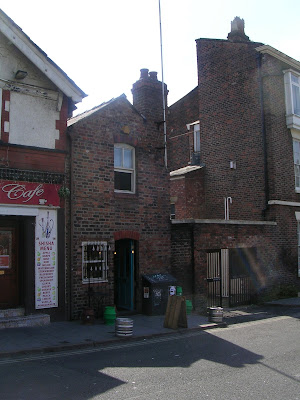 Another un-imposing exterior, and inside is a tiny room with just eight seats and a little counter at the back.  Real ales are served by gravity from the cask, I selected a stout from Salopian.  The friendly barman offered me about 2/3 of a pint in a dimple mug, saying sorry it's run out, you can have this for the price of a half - bargain!

After I'd paid he started to remove the cask and realised it wasn't empty.  Replacing the filter in the tap didn't help, it turned out the remaining beer was full of sludge.  I was able to report that my "half" was spot on, anyway, the filter had done its job.  After two keg beers it was nice to have something less gassy.

When I were a lad, the smell of jos-sticks meant only one thing, but perhaps I'm just showing my age.  Unusual, anyway, to have one burning in a pub.

A group of six people arrived, filling the room completely.  Once served they moved to the equally small upstairs room.

The barman/cellarman moved on to tapping a new cask and was annoyed to find it was cloudy.  He joked that he could write "unfined" on the sign and no-one would know.  I must emphasise it was just a joke, and he left the cask unserved, pending further investigation.

They are planning to open a branch on Moor Lane in Crosby soon, I look forward to checking it out.
Posted by Phil Wieland at 23:03