I returned to where it all began (See here for the story.) with a short bus ride to West Derby Village, and I headed first for the Sefton Arms: 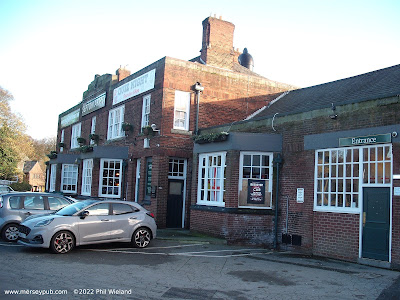 Has it been redecorated since my last visit?  I don't really recall the pleasant interior looking exactly like this.  The Christmas decorations (Bah! Humbug!! - It's only November) are done to a tasteful level, and mix nicely with a little world cup bunting.

One pump on the counter so I decided to risk Greene King IPA.  The barmaid had obviously never been taught how to pull cask ale, a hefty tug on the handle while the glass stood on the drip tray resulted in a pint of froth with about half an inch of beer.  She apologised, waited for it to settle and then repeated the process with the same result.  After she had served two other customers, interleaved with intermittent pulls on the pump we were getting nowhere.  Eventually I persuaded her to remove the sparkler, and we soon achieved the proper result!  The actual ale, when I finally got to taste it, was fine.  As fine as their IPA can be, anyway.

The sound in here was mainly football commentary, the hosts were not doing very well I gathered.

A gentleman at the counter was ordering some Baileys and brandy, with a double of Three Barrels in each.  I used to be overly fond of Baileys and whisky, I don't think I've ever tried brandy.

This pub used to have a separate room with counter at one end, forming a "public bar" which was almost a separate pub, while the main part was the "lounge" side.  I noticed on my way in that one or two of the windows at that end were boarded up, leaving me to suspect that it is now out of use, and I couldn't see a way through from this part of the building - i remember a door last time I was here.

Not many customers on a Friday afternoon, I wonder how the other pubs here are doing.  Let's find out - The Hare & Hounds: 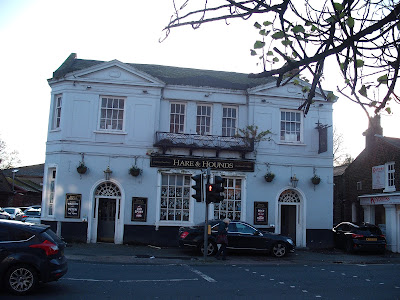 And the answer is, a lot better.  Both sides of this pub were busy, and I sat at what appeared to be the last available empty table.  Of course, when I say busy I'm talking 2020s standards, the days when you had to squeeze in the door and push your way to the counter have gone forever, I fear, except perhaps for pubs in town in the weeks before Christmas.  (Actually, I've got a work reunion to go to in Liverpool two weeks tomorrow, it'll be interesting to see how busy things are.)

There were no clips on the three handpumps, I suspect cask ale has been abandoned in the five years since my last visit here, when I got a free pint if I remember right.

The interior has not changed much, although it's been well looked after in the intervening years and remains pleasant and comfortable.

I had a choice of viewing here, two different racing channels or the footie.  The volume was pleasingly low on all of them so the main sound in here was chatter.

Again Christmas decorations were tastefully subdued, which seems to be a common theme this year, although I fear we may see a rash of more tasteless decorations once we reach December.

What a classic boozer this is; chatty regulars, friendly barmaids, warm and welcoming, what more could one ask for?  Well, real ale I suppose.

Across the road to the Hunting Lodge: 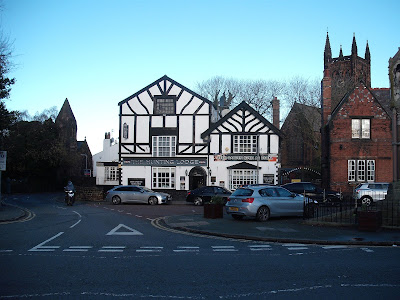 Conclusive proof that the price of ale doesn't affect custom:  My Guinness here was well under £3, as opposed to £3.40 over the road, and yet it was pretty empty here.

Just a small number of customers were scattered around this pleasant but slightly "plastic" pub.  Remarkably, no Christmas decorations at all, which must be worth a million bonus points.  There were lots of world cup bunting and an impressive array of flags on the ceiling.

The Qatar match finished and we switched to the build-up for the Netherlands - Goedemiddag to all my Dutch readers.

Not really much to say about this pub, pleasant comfortable friendly and quiet.

Next, what I hope is the best pub in the Village, the Halton Castle.  Hang on, though, what's this?  The Book: 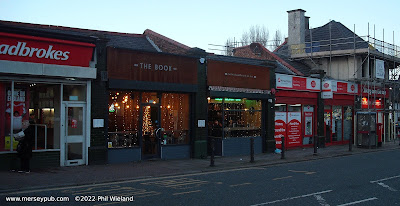 A rather good shop conversion, too big to be called a micro I think, as it is clearly two shops joined together. I wonder how long this has been here?  The menu says March 2018, so only a few weeks after my last visit to the area.  The shops were formerly a butcher and a bookmaker's.

The well done interior, with painted brick and rough woodwork walls, is very good.  The frontage is two shopfronts, don't try the first door, it's only a fire exit and pushing on it just makes you look daft, and everyone inside can see you make an idiot of yourself.  DAMHIK.

Five pounds twenty for a Guinness, that's double the price in the Hunting Lodge!  And yet the same level of custom.

Once again let's head for the Halton Castle.  Oh no, there's another new one to do first, the Cubicle: 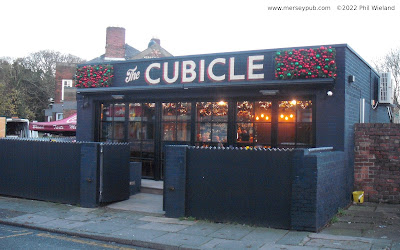 Well I never - Another bar I've never heard of.  One pleasant comfortable room with a tiny counter in the corner.  I spotted that the Guinness font was a surger not a keg so I switched to Love Lane.  But it wasn't Love Lane despite what the sign said.  Instead a very tasty pint of something else pale and crafty, the name of which I didn't catch.

The only other customers were a group of five who were enjoying some chatter at one table, the rest of the room was empty.

This small squat brick building used to be florist, Streetview reveals.  Given its location at the edge of the Sefton Arms' car park, I wonder if it was originally a betting shop?  (Update:  I have been informed that originally this building housed public conveniences, which certainly explains the rather unusual name.)

With winter arriving, they definitely need to sort out the spring on the front door, it seems to settle ajar, resulting in a cold draught.  Even when a member of staff came in and carefully closed it, it opened itself again.

Once again the crimbo dekkies (After 30-odd years I think I'm entitled to use the local vernacular) were not over the top, just tasteful.

Now comes a difficult question:  The Halton Castle remains, but I have already had five pints;  should I go for six and complete the Village?  I think so, although it's too dark by now to take a photo.  Here's one from last time: 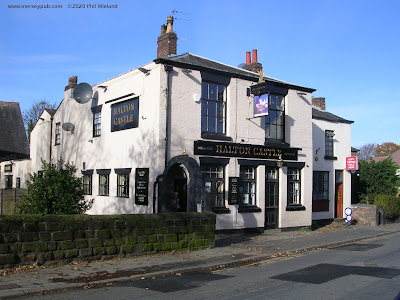 I was disappointed to see the three handpumps were all clipless so its "best pub in the village" status is at risk, but this multi-roomed gem is still a fine establishment.  Busy with customers of all ages, a classic local's boozer doing a good trade at half four on a Friday.

The football was just about audible but the main noise was umpteen animated conversations, exactly as it should be in a proper pub.  Christmas decorations were sparse and well done in here.

My Guinness went down very easily and all too soon it was time to get the bus home.  It's not often I get six ticks in a single day, and two were new ones as well!

Pub of the day: Halton Castle, despite the lack of real ale.
Beer of the day: GK IPA
Miles walked: 0.8
Maybe coming soon: City Centre or Birkdale
Posted by Phil Wieland at 23:49