Back To Square One for Free Beer!

The genesis of The Merseyside Pub Guide was an occasion in June 1998 when I and a group of friends decided to go "somewhere different" for our Friday night out, and selected West Derby Village where we enjoyed good beer in good pubs, and I started recording details of the places we drank in.  Today I headed back to where it all started almost twenty years ago.

It seems to happen fairly often on this blog that I contradict what I wrote last time so, having said last week that I have to start mid afternoon because of limited opening hours, today I reached the Halton Castle at noon: 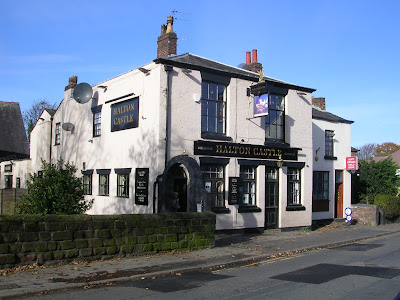 A splendid little three-room place, sympathetically modernised retaining various old features. The barmaid, smoking outside, spotted me taking a photo and eyed me with suspicion as I approached, but soon served me a spot on pint of Greene King IPA. There was no-one else in the place, so she returned to her cigarette and left me in the comfortable bright surroundings of the "private bar" which has a tiny serving counter.
No other customers came in while I was there, so I left the pub empty.

A short walk down the road to the impressive bulk of the Sefton Arms: 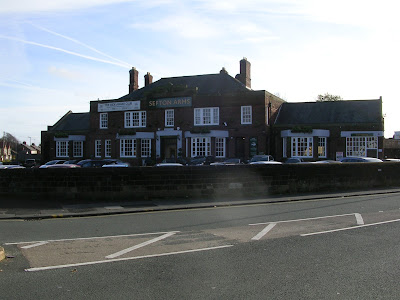 Inside, it has been modernised out of all recognition since I was last here, the modern pastel shades making it look almost like an Ember Inn.  In stark contrast to the Halton it was quite busy with lots of diners at half twelve.  This is a member of one of Greene King's chains. They seem to have a number of different brands, this is the one with black menus labelled "Time well spent".
The handpumps on the bar were offering a few of GK's standards, plus a guest, but most were not actually available so I had another pint of their IPA, once again in excellent nick but a very short measure.  There was the contented hubub of diners in the background, almost drowning out the gentle background music, as I enjoyed my drink.
My records from 2003 refer to a noisy main room with a young clientele, and a "totally separate" pub round the side, much quieter.  I thought this had been refurbished away, but on my search for the gents I discovered a door through which I could see the side room and bar, looking operational but not in use at the time of my visit.

Round the corner to the Hare and Hounds: 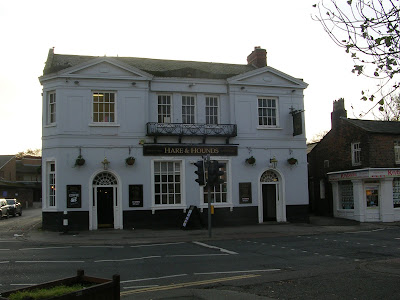 Another one with particularly pleasant contemporary decor inside but without food there were fewer customers than in the Sefton, although it was ticking over gently.  The only handpump with a clip offered Hobgoblin, the barmaid had some trouble pouring it, and rather than wait ages for it to settle, gave me an extra glass, so after grumbling about the short measure in the Sefton, I got well over a pint here, and there was more to come!  As I sat drinking my pint-and-a-bit and typing the above, the landlord or cellarman (or both) appeared. "Are you on the cask?" he asked. "I've just put Bombardier on, have a free pint".  Never one to miss free ale, I accepted the pint, which somewhat extended my stay here.
There's a little bit of the conspiracy theorist in me, so I wondered if the Halton Castle had phoned up their mates to say there's a bloke photographing pubs and writing things on his tablet, it might be worth buttering him up in case it's a pub guide. If so, then I have broken my rule about never accepting free drinks.
Anyway, whether this was attempted bribery or not, the Hobgoblin was OK, perhaps towards the end of the barrel, and the Bombardier was perfect. All in all a pleasant boozer, the barmaid was chatting to the regulars, there was racing on the tellies but quiet enough to be unobtrusive, it was just generally comfortable.
I must say I thought the "Seven deadly gins" promotion was rather witty, an obvious pun now I've seen it but it'd never occurred to me before. On the gantry above the bar were various gin bottles with labels like envy and greed attached.

It's up to you to decide whether free ale has biased my report. Why not go in and say "Merseypub got a free pint, where's mine?", and see how far you get! On reflection, I'd rather you didn't, although it wouldn't be as bad as the lying bastard who's going round charging gullible staff £75 to put their pub in my guide.