New Ones In Town

I headed in to Liverpool for what was supposed to be a mini-survey, starting at the Red Lion on Slater Street: 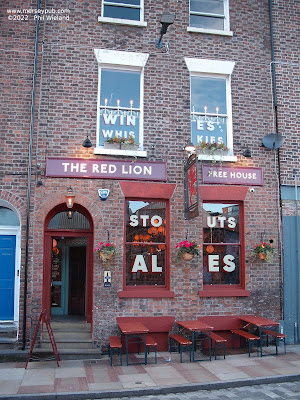 What a great pub this is, a stark contrast to the late night drinking establishments I expect around here.  It has one large room plus a courtyard at the back.  The room is decorated with lots of bric-a-brac, stuffed birds in glass cases, teapots hanging from the ceiling, and so on.

The decor isn't the best thing, though; there are five handpumps on the counter with a selection of cask ales including my favourite White Rat.

The barman warned me that someone had broken the pump, and sure enough the ale came out very aerated, with the handle return sucking beer out of the glass.  Eventually he managed to produce a full pint which I treated with some trepidation.  It was perfect.  (Thinking about it, the "abuse" the beer received was similar to an economiser and this one comes from autovac country - See my previous blog on the subject.)

Music mixed with gentle chatter from the half dozen other customers as I enjoyed my favourite ale.

Ten out of ten for this newcomer to the Liverpool real ale scene, perhaps it will make next year's GBG?

As I walked up I had noticed a number of people with LFC scarfs. Had I slipped up and come out on a match day?  Fortunately a quick check on the internet said no.

As I got to the end of my pint a group of blokes came in, and sat with me because there were no other seats available.  We soon got chatting on subjects ranging from Pink Floyd to my former employer on Edge Lane.  Our main topic of conversation, however, was pubs, and they admired my book and agreed that collecting pubs was a great hobby.  I passed all the "have you been in ..." questions with flying colours.  If you find this blog, lads, it was great to meet all of you and I hope you had a good afternoon out.  Don't forget to buy the book!!

Next, down to Wolstenhulme Square, and another new one, Seven Bro7hers: 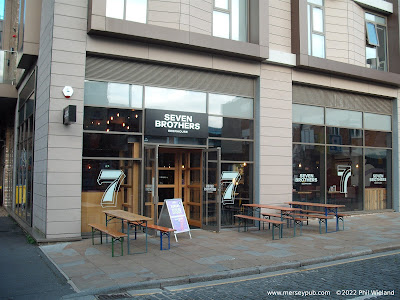 Very different from the previous tick, but none the worse for that.  Modern styling, cable trays above my head, and bare brick, rough wood and black tiling on the walls.

I got the trainee barmaid who had to be shown how to serve me, but she produced a fine pint of a very good stout.  If I'd spotted Neptune's On The Bounty on the guest list I probably would have enjoyed that even more.  (At the excellent Rainhill Beer Festival last week I ended up breaking the unwritten rules of beer festivals and having three of the very same ale - it was in cask there.)

There were two other drinkers in, and they soon left leaving just me and the two staff.  Is there another one in the kitchen?  I hope they get more customers later.

Where next?  I wandered towards Hanover Street without any real plan in mind, but wait, what's this?  Pins Social Club: 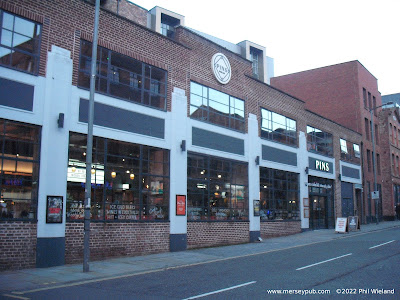 A bowling alley with eight lanes plus a substantial bar area with pool tables and a selection of craft ales.  They'd run out of Brewdog Punk so I had a pint of the always tasty Neck Oil.  Blimey!  £6.25!!

Only one lot of bowlers were in action, with more people playing pool, and I wasn't the only person who'd come in just for a drink.

A very high ceiling with the usual exposed air conditioning ducts and cable trays combined with some rather fine lighting fixtures and even an enormous glitter ball to create a pleasant modern ambience.

I noted a small stage area in one corner, presumably they have live music sometimes.

Next I wandered randomly, noting quite a selection of bars I've never heard of so a few more surveys round here are definitely called for.

After careful consideration (yeah, right) I selected Hatch on Slater Street for my final call of the day: 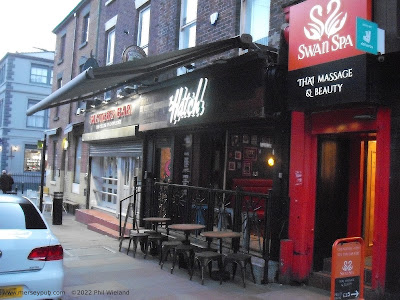 Many years ago most of my pub surveys were with one or more friends.  Before the tablet era my notes were scribbled in a notebook and we had a rule that if I'd made my notes before we were served we were allowed to walk out.  When this place was called DOM-1's we visited on a Thursday evening to find deafening music, no customers, and bar staff too busy chatting to serve us.  I completed my jottings and we departed.  So, depending on how you set the rules I may have never ticked this place!

Two name changes later and it's still deserted but the barmaid, despite being in mid chat with a colleague immediately broke off to serve me a pint, so no complaints this time.

A rather odd place inside, a long narrow low-ceilinged room with skylights leading to a counter area with a much higher ceiling.  A distinct "sweaty mop" odour filled the room, and no other customers came in while I enjoyed a decent pint of the black stuff.  It's probably very popular at midnight on a Friday, when I'm usually tucked up in bed.  (Actually, tomorrow is poker night so I'm unlikely to be home before two.)

Four is enough on a so-called mini survey, so I think it's time to head for home.  Three brand new ticks is a fine result.