Perhaps unwisely given the weather forecast, I headed under the water by bus to try a few pubs in Liscard last visited in 2017.  And hopefully one from 1999.

There are lots of pubs in Liscard, so I had to walk past a number last visited in 2018 to find the 2017 ones.  I started in the Royal Oak: 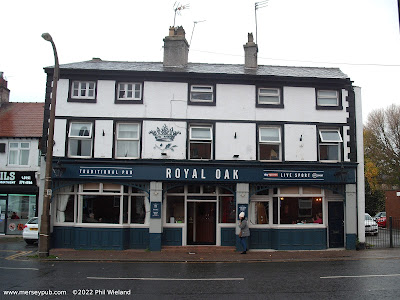 A large very well done pub with restrained decor, comfortable and popular on a wet Friday.

Gentle muzak blended with cheerful chatter and the click of pool balls in here.  The world cup coverage on the telly was fortunately silent.  I didn't think it had started yet?  In any case, England won the World Cup last Sunday.

There were some loud arguments about the pool, apparently someone wasn't correctly following "Birkenhead Rules".  It seemed a bit like a game of Mornington Crescent, where no one actually understands the regulations.  (Don't get me wrong, it was all cheerful banter, and actually now I think of it there was a remarkable lack of swearwords.)

Looking around before departure I noted the impressive brick fireplace by the entrance, clearly a modern construction but none the worse for that.  Also, beside the main door is a K6 phone box, half inside and half outside, an unusual bit of fun decor.

Next, the architectural wonder that is the Primrose: 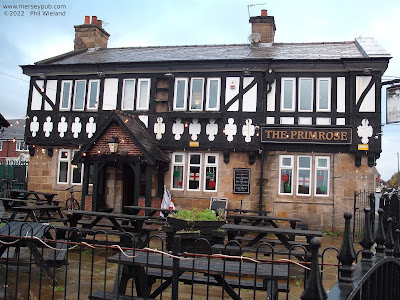 The fantastic interior has survived another five years unscathed, I'm very happy to report.  Dark wood paneling, wonderful ceiling plasterwork and so on.  I do wonder if the wooden gantry above the counter might be a more recent addition, from my angle it has more of a sixties look?  Another historic feature now rare is the pie warmer on the counter!

Again, background music mixed with happy chatter, the place was doing well although the back room accessed through a splendid wide arch was empty, all the regulars were concentrated in the bar side.

When I walked past the Saddle to reach the Primrose I noted quite a few people with black ties - Would it be shut for a wake, I wondered. 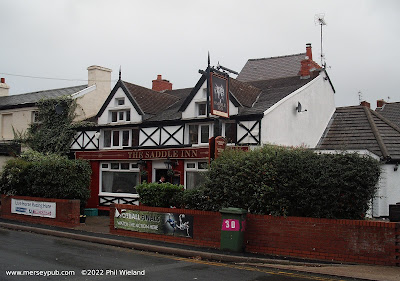 Everyone in the noisy packed pub was here for the wake, but no one objected to an interloper having a Guinness, so I sat in a corner and made my notes.

Not really a good situation for researching the guide, as I'm sure today is non-typical for this pub, but I can still say it is nicely decorated in traditional style, knocked through into one front room plus a back room with no counter.  The real fire in a wood burning stove added to the comfortable atmosphere.

There is a Liverpool tradition that you can't have a wake without a falling out and a fight, but there was absolutely no sign of that here:  Lots of very drunk mourners, plenty of manly hugs but all well behaved.  The deceased clearly had a lot of friends.

Feeling something of an intruder I quickly downed my pint and left.  Rest in peace Robert Murray Brown.

Next, the prime target for today, the Boot: 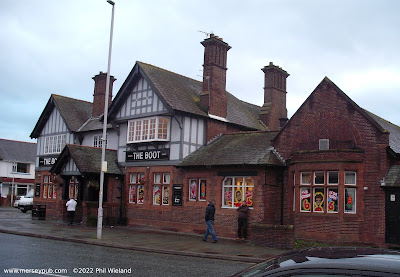 Thanks to a combination of limited opening hours in the past, and my bad planning, I haven't been in here in this millennium, so I was especially pleased to tick it today.

Even better, they've got a couple of handpumps, my pint of Japanese London Pride was very good.  And at less than three quid it was the cheapest pint of the day so far.

It was quite busy in here, I had to look round for a free table.  The background music was almost completely overwhelmed by happy chatter.

The plan was to finish with another '17 tick, the Wetherspoon's, but on my way to the Boot I had spotted a place unknown to me, Twelve Sixty.  Sorry about the picture, it was getting dark by now: 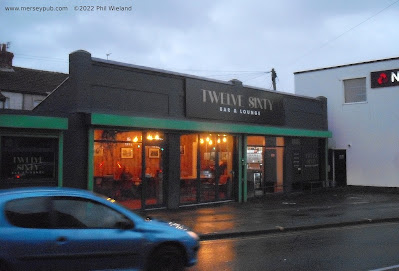 Even better than a 1999 revisit is a brand new pub, and this one's a belter.  The place is difficult to get in to, the first door I tried was locked.  Eventually I found the correct door and after pulling, then pushing, then pulling again I was in, much to the amusement of the three customers and the landlord, Dave.  I was pleased to see five handpumps one of which dispensed a lovely pint of one of my favourites, Ossett White Rat.

As soon as I had sat down two of the other customers departed leaving just a young lady and me.

I have to say it's disappointing that the Boot is so busy and this micro is so empty, but it only opened three weeks ago so maybe more people will learn of its existence as time goes on.  I really hope it gets enough custom to keep it going.

The other micro here, the Lazy Landlord, is also on my '17 list but it will have to wait for my next visit.

I chatted to the other customer, she had come out to do some shopping but never got further than here.  Two more customers came in and the shopper went off to make her purchases.

Leaving at least two '17 ticks for next time, it's time to head homeward...  I remember catching the wrong bus last time and half an hour later I was even further from Liverpool, let's try to get it right this time.  Just as I arrived at the little bus station, a bus with Liverpool on the front and the right number turned up so I was soon on my way.