I headed out on a sunny Saturday afternoon to Townsend Lane.  A schoolboy error - Liverpool are at home at three, so the traffic was horrendous and the bus took ages.  Eventually I reached my first target, the wonderful Farmers Arms:

This architectural gem dating from 1925 remains unchanged, I'm pleased to report.  I entered by the wrong door and found myself trapped in the smaller half of this two sided pub.

The room was busy with large chatty groups, their conversations drowning out the football commentary in the background.  Tellies all around were showing Man City struggling, except the screen above my head which had racing.

This is what boozers should be like:  Filled with cheerful drinkers and animated chatter.  Let's hope I find some more like this today.

Next, the Clubmoor.  I expected it to be closed and it was: 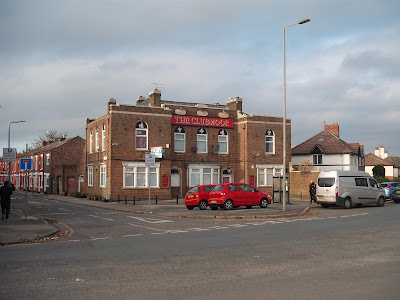 On to the Canon: 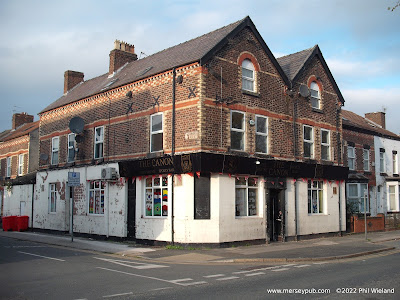 This plain two sided traditional boozer was fairly quiet when I entered, but judging by the array of glassware being loaded into the dishwasher I'm guessing it was full of fans a few minutes ago.

Another one that hasn't changed since I did the same survey five years ago, I think it is good news to find these pubs which have survived COVID apparently unscathed.

I checked the dictionary to confirm the name of the pub refers to religious (or musical) matters rather than a big gun.

I considered my plans for the rest of the day, basically this close to Anfield (Almost near enough to see the For Sale board!) I need to do as many pubs as I can manage and then catch a bus into town before the footie lets out.  I've got about 100 minutes.  I quickly downed my second Guinness and moved on.

Just a short walk to the Elm House: 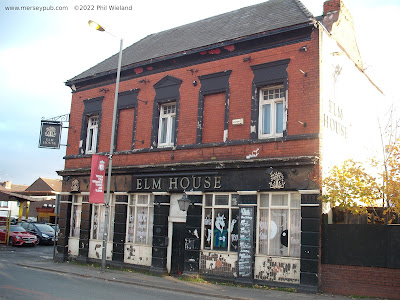 Clearly I was tempting fate with my comments about pubs surviving, this one hasn't. 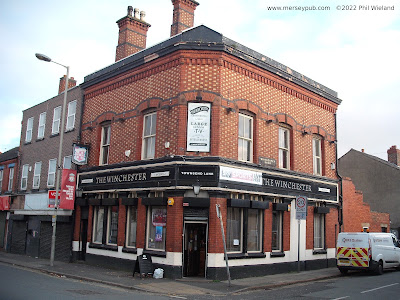 Both names are displayed, what is a pub researcher to do?  I think Winchester has greater prominence on the outside, so I'll go with that.

As I was handed my Guinness the live football match on the telly played the Last Post.  I was startled and impressed to see the whole pub fall silent, the cluster of regulars at the counter standing quietly.  At the end of the Post everyone relaxed, the chatter restarted and I moved to a seat.

Another classic boozer doing well on a Saturday afternoon, once again the used glassware being tidied away suggests it was very busy with fans earlier on.

Jeff Stelling was mostly drowned out by animated chatter amongst the regulars.  He seems to have aged a bit since I admired his non-stop talk umpteen years ago, with a lot more umms and errs now than I remember.

Next, the Stadium, formerly the Cockwell.  Annoyingly, I seem to have forgotten to take a photo here.

Oh dear, a rather worrying place this, almost every window along the frontage was smashed, but it was still carrying on.  Only a handful of customers, plus a group of women, staff or friends I think, one of whom was sticking Christmas stickers in the windows.  A poor substitute for reglazing, I feel.  Was this just mindless vandalism, or something more sinister, I wonder?

Liverpool winning 2-1, Everton losing 2-0. Is it my imagination or are there more three o'clock games than usual?  Perhaps because it's the last Saturday before the World Cup interregnum?

The decoration process moved on to the windows by my seat.  While a Santa sticker is undoubtedly better than a hole in the glass, I still think a glazier is needed.

Here I am in pub number four, it looks like I'll have no difficulty in finishing my research before the final whistle, in fact plenty of time for number five across the road.  The Willow Bank: 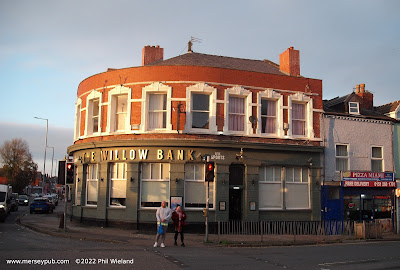 A rather fine two sided boozer this one.  I think it has changed since my last visit, the arch-roofed area at the back has been integrated into the rear room perhaps.  It still has a stage at the back, which I imagine is used sometimes for live music and/or a disco.

Gently ticking over at four on a Saturday, there were a decent number of customers in here, families, couples and groups of friends.  Another place that has got through the last few years, I hope they all survive the coming recession as well.

Contrary to the previous plan, why don't I walk down to Tuebrook and get a bus home?  Good idea...

Pub of the day: Farmers Arms, for the imposing exterior.
Beer of the day: Guinness
Miles walked: 2.4
Maybe coming soon: No idea.
Posted by Phil Wieland at 23:27