On previous visits here I've used Conan Doyle and Ray Davies references for the blog title, what to do this time?  I couldn't think of any Abba puns, and my woeful ignorance of history means I can't say anything clever about Napoleon or the battle itself.  My next attempt was to use the name of the first pub, liver and onions perhaps, or maybe it's an offally good pub, but nothing funny enough came to mind.  Oh well.

I headed inland from the station and reached the Liver just before the rain started.  The busy road junction makes it hard to take a good photo of this pub: 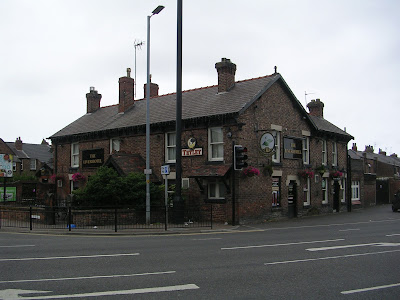 Why do I like this pub so much?  Fine old building, pleasant interior, quality ales, friendly staff, but it's not the only place that can claim those attributes; there's something extra I can't put my finger on.

On a Tuesday lunchtime there were very few customers, and most of the gentle chatter I could hear was amongst the staff.

The karaoke team (judging by the amp and box of CDs) arrived to set up while I was enjoying my excellent pint of Fab Four from local brewery Rock The Boat.

Just round the corner is the Ferndale: 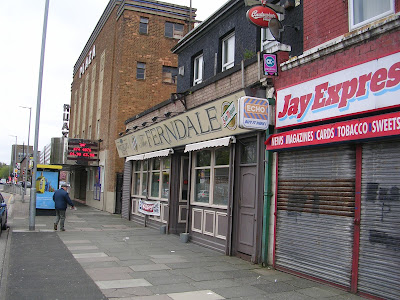 A very nicely decorated former member of the Oak Lodges chain, this.  Back in 2011 I used the word tatty, certainly not applicable now.

Surprisingly, they've got a bank of four handpumps on the counter, but not in use so I stuck to Carling.

Two customers, one chatting with the barmaid, the other sat on his own, plus me, were the only trade for the pub at one on a Tuesday, and I don't think my half is going to add much to the profits!

One more customer came in while I drank, to report that the rain had stopped.

Back towards the middle of Waterloo, and Stamps Too: 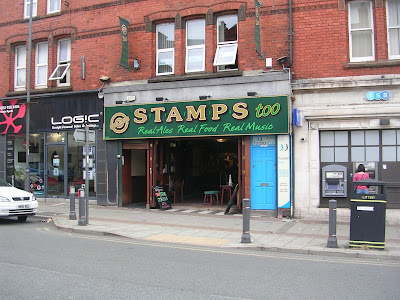 I'm not a great fan of tasters of real ale because (a) I can't really judge a beer on one sip, and (b) if I don't like it it's a bit embarrassing to say no.  However, when I saw a beer from Wigan infused with tea I was intrigued so I asked for a sample, and it seemed great so I had a pint.  It was a standard pale hoppy ale but with just a hint of something unusual in the flavour, and it was very tasty - highly recommended.  The landlord had said it was very popular, and then "I could have predicted that" when I ordered the pint.

I think I was the only customer, unless one was hiding round the corner.  Oh yes, there he is.  Towards the end of my pint three more came in.

The folding doors were open at the front, creating a pleasant open atmosphere, cleverly they've got a little porch at one side of the frontage which can be the way in in colder weather.

Admirably, unlike some real ale pubs, they had an "ordinary" ale on as well as the unusual stuff, in this case Butcombe Gold, which I seem to recall is very good.  No cask snobbery here either, they also offer Tetley Smoothflow.

I surveyed the display of pump clips, including Cains 2008, possibly my all time favourite English real ale, what a shame it's no longer available.  There's some other favourites such as Hawkshead Windermere Pale, Dark Star Hophead, and Oakham Citra.

Next the never visited Parnells: 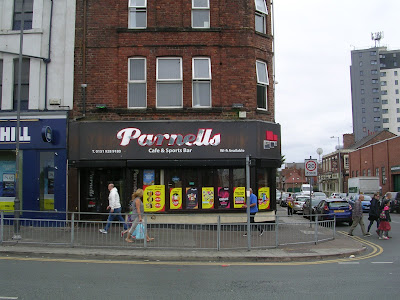 The windows all plastered with cheap drink offers didn't bode well.  However, inside was not the down market dump I had expected, but instead a very well done room with comfortable-looking booths with their own tellys along one wall.

No real ale, of course, so I had a Carling.

Just one or two other customers, chatting with the barman, and then while I wasn't looking they disappeared out the back leaving me alone in the room.  Free top-up anyone?  (No, I didn't)

On to the Railway: 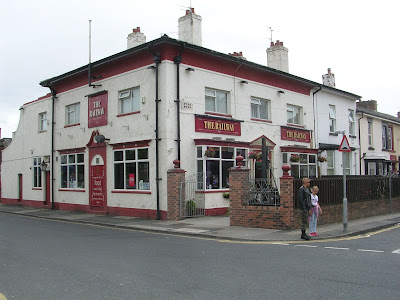 Possibly the most down-market of today's calls, but still well cared for and spotlessly clean, with a handful of regulars sitting at the bar keeping the place ticking over.  One of them shouted to summon the barmaid for me.

The whole place seemed a bit untidy, with a stack of chairs in one corner, and a large telly leaning against the wall, but the bench seat I sat on was clean, comfortable and well maintained, and there are lots of other places where you can't say that.

I've not been in here since 2003 because it spent some time closed and boarded up in the intervening years.

Surprisingly, it doesn't seem to have changed much behind the boarding up, and still has a rather fine interior with dark wood panelling.  There's some great ceramics behind the counter.

Definitely the busiest of today's ticks so far, the place was a hive of chatter and my ideal, a seat alone in a quiet corner, was impossible although I did manage a table to myself.

The three handpumps on the counter were purely decorative (And could do with some Brasso by the way) so I had a lager.
Posted by Phil Wieland at 23:28