On one of my regular visits to the City of my birth I took a chance to visit a few pubs.  I started in the Clarendon Arms: 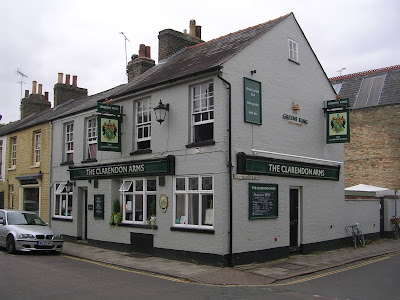 This pub probably scores low with CAMRA because they only have three real ales, Greene King IPA, Abbot, and a guest, but the ones I tried were spot on, so I'm happy.  (Of course, now I've said that it'll probably pop up in the next Good Beer Guide, expected next week.)

The food looks good, and is popular, but it's not cheap.

At half twelve on a Saturday the main custom seemed to be foreign family groups dining - It's pleasing to see visitors enjoying a "proper" British pub rather than using some chain chicken outlet.

I can't make out the interior architecture here, the floor is mainly ancient looking stone flags, but the part where I was sitting had polished concrete tiles.  The walls are painted wood panelling.  Anyway, it's very pleasant, which is the important thing.

On to the Saint Radegund: 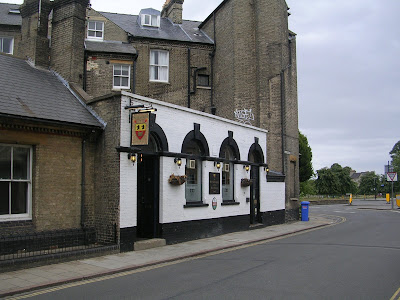 The smallest pub in Cambridge says the sign, but it's no Lakeside Inn.  One small room with a counter in the corner is decorated mainly with rowing paraphenalia, including some Bumps trophies for the St Radegund VIII.  I see on one that they bumped Champion of the Thames, my next destination.

They serve quality real ales from Saffron Brewery, I had a wonderful porter.  I was somewhat startled when the landlord said "That'll be two pounds."  "Er, is it always this cheap?"  "Yes."  All ales £2 says the sign, now that's more like a decent price - I paid £4 in the last place!

Just me and two regulars arguing over whose round it was (In a good way - "It's my turn to pay", "No, I'll get these") constituted the custom at one o'clock.  Three more came in later.

Why have I never been in here before?  It's a wonderful pub!  Probably because they don't open during the day, except on Saturday.

I particularly like the nameplates marking late regulars' places at the counter.

Next, down the road to the Champion of the Thames: 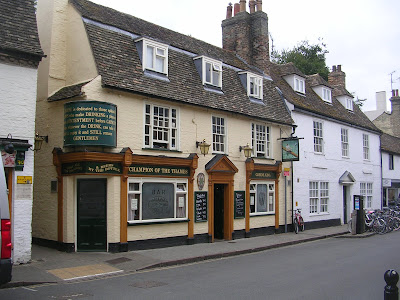 Back to Cambridge prices here, my pint of a tasty guest was £4.50!

If you want more than a snack, it would seem that they have Thai food delivered from a takeaway nearby.  I'm not sure how this works, do you order at the bar?

Apparently, this pub is run by the same people as the Clarendon, perhaps that's why the guest ale was the same.

Finally, on to Wetherspoon's Regal for reasonable prices: 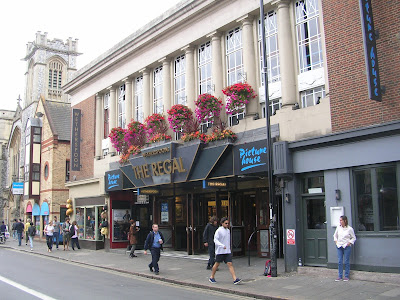 This enormous converted cinema (Which was once advertised as the largest pub in the country, it has now lost that title to another branch, in Ramsgate.) was doing a roaring trade on a Saturday afternoon.  It was busy, but not so full that I couldn't find a table.

I've always thought it was a bit gloomy inside here, a cinema has few windows, of course.

Annoyingly, I never visited the other Cambridge Wetherspoon's before it was closed by a fire.
Posted by Phil Wieland at 23:07