I started my visit to Crosby at the beautiful Crow's Nest: 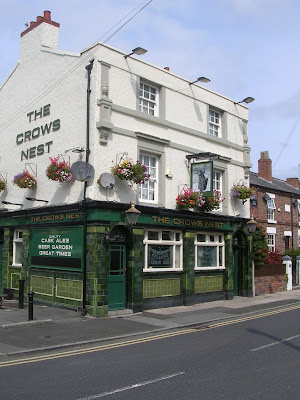 This listed architectural gem never changes, thank goodness, the wonderful interior has leaded glasswork, dark wood panelling etc.  The lounges and the snug are served via hatches from the servery.

Quality real ales are served, I had Yorkshire Blonde from Ossett - Very nice.  I noticed table service continues in the lounge, although whether this is official or just for regulars I don't know.

The place was very quiet with just a few people in, the only sound was the banter between them and the landlady.  One of the regulars was writing the real ales on the blackboard, putting up with much heckling - Apparently someone had spotted a spelling mistake recently and complained to the landlady, so she was especially keen that he got everything right.

Just along the road is the Birkey: 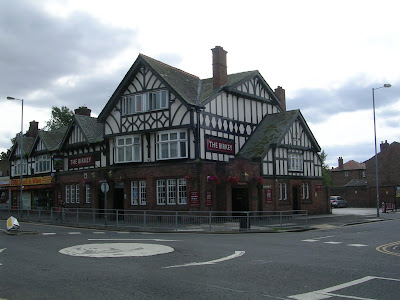 What a pleasant Greene King pub, two sided, both deserted at one on a Tuesday.  There weren't any menus visible where I sat, it's unusual to find a GK house which isn't in one of their dining chains.  Perhaps all the menus are in the other side.

Last time I was here, back in 2002, it was keg only, so I ordered real ale with a little trepidation, but my pint of Old Hoppy Hen was spot on.  I wonder how many different words the marketing people can put between Old and Hen to stretch this franchise.  I've seen Crafty, Spooky, Golden, Hoppy, and of course the original Speckled.  Anyway, mine was hoppy as advertised, and delicious.

The only other customers were a small kid and his grandad.  The barmaid soon had the paints out so the little'un could do some pictures, while grandad looked on, bored.

I strolled past the Crosby, which is closed and up for sale: 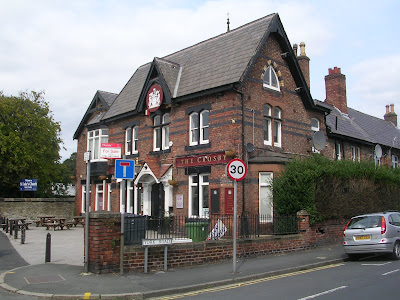 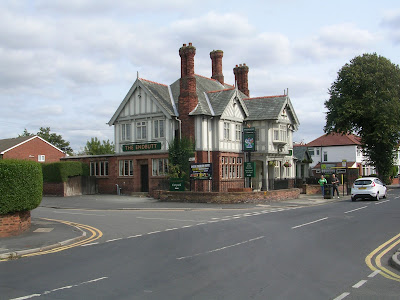 Greene King seem to be taking over the world!  This is another place that was keg only back in '04, but now has GK brews plus Landlord, my pint of which was very good.

Inside the impressive 1920s building, the interior is bog-standard twenty-first century chain pub, all knocked through into one enormous room.

Unlike the Birkey, menus were everywhere, under the Time Well Spent brand, and with fish and chips for seven quid it looks good value.

Custom was sparse on a Tuesday afternoon, the piped music mixing with a little quiet chit-chat and the occasional click of pool balls.

I should record my first sighting of Christmas publicity here, a small display at the end of the counter exhorting me to book my Christmas feast today.  The year's nearly over!

Back towards Crosby's centre, and to the never before visited Pioneer: 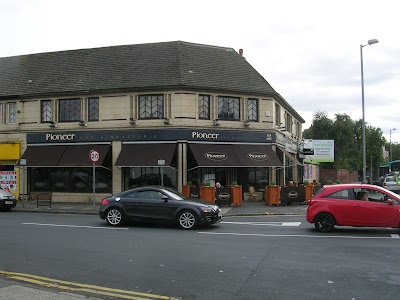 This up market brasserie is very welcoming to drinkers, with some tables unsuitable for dining.  The bar menu includes various sharing platters.  In the other room, out of use with the chairs stacked on the tables at three on a Tuesday, I think there's a restaurant menu.

The decor inside is very well done contemporary, creating a comfortable ambience even when it's empty.  The only other customers were a noisy group sitting at a table outside, drinking San Miguel in the cold.  I stayed inside, alone.

So, as I often say, not my sort of place, but good nonetheless.

Needless to say, now that I've mentioned Christmas, this place had a number of adverts for breakfast with Santa, Christmas dinner etc, etc.

On to the Edinburgh: 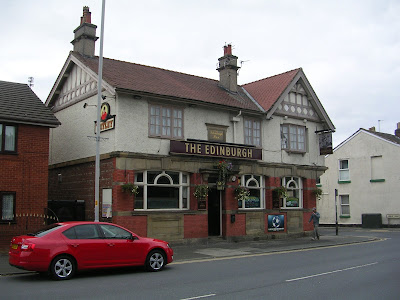 Once again a pub I had logged as keg only now has real ale.  My pint of Black Sheep was maybe not the best but it wasn't bad.

The classic interior has been preserved, and I was served at a tiny hatch in the bar back before adjourning to a lounge.  A gentle hubub of chatter from the bar mixed with racing commentary from the TV there, in the room in which I sat was one other customer, drinking lager and fiddling with his tablet (As was I), and total silence.  I mean I was fiddling with my tablet, not his, but I think you'd already worked that out.

I noticed around the walls bell pushes for table service, I assume they don't do anything in the 21st century.
Posted by Phil Wieland at 23:31