My first objective for today was to visit the Blue Anchor in Hoylake which dates from the early sixties, where I had been asked to report on how much original remained inside.  Sadly, I found it closed and boarded up, so no luck here: 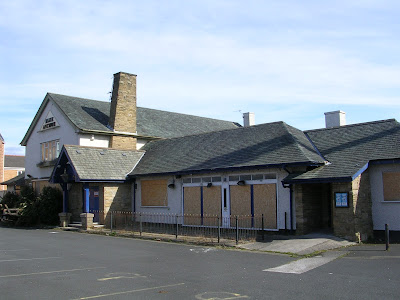 A short bus ride delivered me to the Railway in Meols: 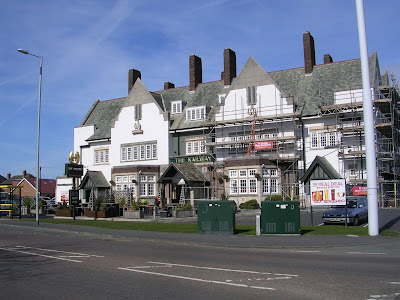 Built in 1938, this imposing building is currently partly obscured by scaffolding.

Inside, the modern standard Hungry Horse decor makes a pleasant "family dining" place.  Some booths have their own telly.

On a sunny Tuesday afternoon the place was busy, I think everyone except me was here for the food.  The menu of pub standards was, apparently, new today and I must say it looks good value.

The choice of real ales was the usual Greene King selection, plus Landlord.  Do they own Timothy Taylor's as well now?  A quick check on the web and, phew, the answer is no.

This pub is something of a thorn in the side of the pub surveyor, because it's the only one in Meols, but today it slotted in nicely between one call in Hoylake and my next destination...

Back to Birkenhead by train, and in to the Park View (Photo taken last month) 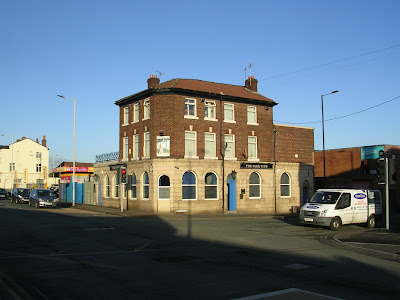 As usual, I turned the wrong way inside the door and entered the deserted lounge in this two roomed boozer.  Everyone else was in the bar.

My notes from 2003 said plain and spotless, and that sums it up rather well.  I sat in splendid isolation on a comfortable bench seat in the lounge, and drank my Guinness.  The only sound was the chatter of regulars and the barmaid from the other side of the pub.

The name of this pub is a little odd, it would need a large tower on the roof to actually get a view of Birkenhead Park from here, I think.

Next, the never before visited Vittoria Vaults, also known as the Piggy: 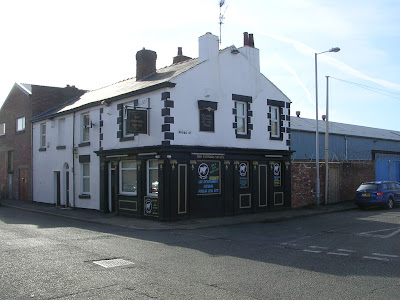 This looked like it might be closed but I tried the doorhandle and entered a compact warm comfortable boozer with half a dozen or so locals inside.  I ordered my usual Guinness from the barmaid or landlady, and a bloke sat at the bar who was later revealed to be barman or landlord made her pour the first pint down the drain so I got a fresh one.  The line was cleaned this morning, he explained.  I was happy to report that my pint was fine.

The decor here, fake roof beams with tankards on hooks etc etc combines to make a very pleasant cheerful interior.  I'm not entirely sure why but I felt this was a wonderful pub, maybe it was the friendly interaction between the staff and the regulars, who were chatting and playing darts.

Live entertainment is important here, judging by the notices on the wall, with something scheduled every Sunday.

I headed to the Seadog next, another one I've never ticked.  It appeared to be operational but it wasn't open:

This looks like it dates from the sixties or maybe even the seventies?

Next, on to the Queens: 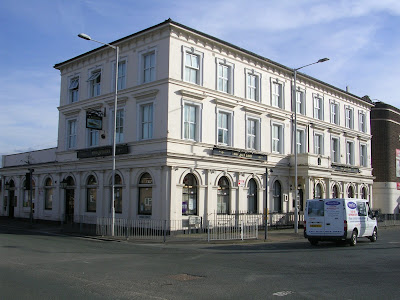 Passing on a bus in the past I had noted this as closed and possibly converted to a residential hotel, but more recently I'd seen what looked like a pub entrance and, sure enough, the door was open and inside I found a large open room with a handful of regulars.

The barmaid interrupted her card game to serve me and there was some delay while someone was dispatched to the cellar to change the keg before my Guinness could be poured.

Racing was on the telly but no-one seemed to be paying attention to it.  The cards continued, I didn't recognise the game:  It wasn't one I've ever played, perhaps it was Rummy.

I walked past the splendid ceramics of the long-closed Meadows: 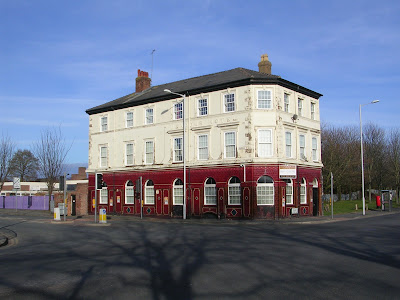 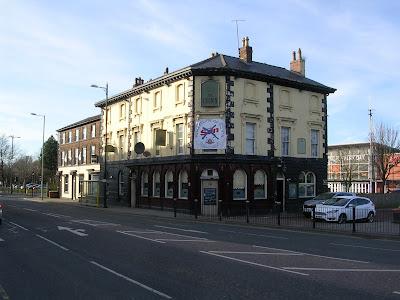 A long time ago this was a favourite pub of mine, with a rather fine historic interior and some good quality ale.  Sadly, they abandoned the real ale some years ago, so while the Victorian decor remains I had to resort to Guinness again.  There are still eleven hand pumps on the bar, but none in use.  Furthermore, there was a distinct odour of "mouldy mop" in here, so my one word summary has be "shame!".

Tipping Point followed by The Chase kept me and the rest of the pub entertained until it was time to head for home.

Coming soon:  Up the Junction again.
Posted by Phil Wieland at 23:40