A train under the river whizzed me to today's destination.  Just outside Moreton station was the Moreton Arms, which has been closed for some time:

As you can see it was surrounded by roadworks, and there was a distinct smell of gas, so I quickly headed to the town centre and started in the Farmers Arms: 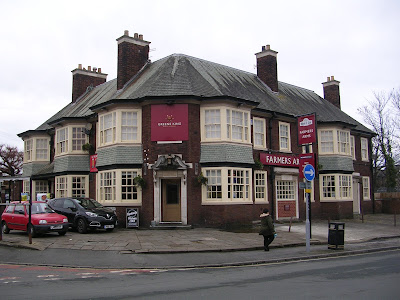 This is a pleasant Greene King operation under the "Time Well Spent" brand.  I entered the plain side and found it deserted and without real ale, but through the door was a large opened out room busy with drinkers and diners, and with four hand pumps.  The place doesn't seem to have changed much in the nineteen years since my last visit, and reports from the intervening years of a lack of real ale are no longer valid.

I sat down to enjoy my excellent pint of Scrumdown.  I later overheard some comments about vinegar so I guess one of the real ales wasn't as good.

Next, on to the Grange: 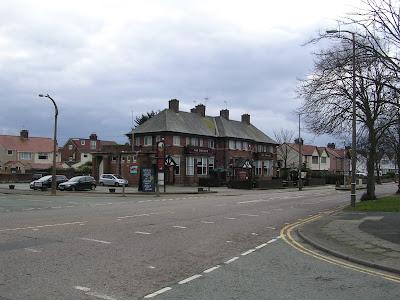 This impressive 1930s (I think) roadhouse has been knocked through inside creating one enormous open interior.  If that sounds like a criticism, it isn't - it is very pleasant and comfortable.

There were a couple of handpumps on the bar, one had a turned-round clip, so maybe they do have real ale sometimes, but it was a Guinness for me today.

I noticed the food menu is not the usual colourful pub-chain production, but a one-off for this pub, and it looks good and good value.

Sadly the place was pretty much deserted at two on a Tuesday afternoon, I hope they get more people at other times.

Back to the town centre again, to the Vineyard: 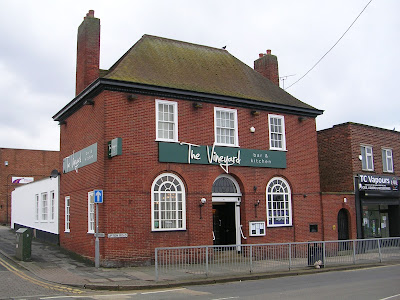 Not really a pub, this one's more of a bistro, but there's a bar counter and a few bench seats which would be unsuitable for dining, so in my book it counts!

One other customer was making a booking for Mothers' Day, after she had left it was just me and the barman.

I drank my Guinness and looked round, this former bank (I think) has been knocked through into one comfortable room.  The "bare brick" wallpaper is a bit overpowering, perhaps.

On to a pub never before visited, only discovered on this morning's "armchair pub crawl" thanks to whatpub.com.  It's unusual nowadays for me to find an old pub I've not previously heard of. 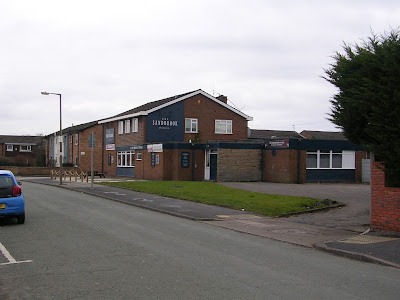 The Sandbrook is a well preserved classic 60s estate boozer, there has been a little remodelling inside with what was probably the off sales joined on to the bar as a darts area.  The lounge was out of use so I couldn't check it out.
The bar seemed to have pretty much all original doors, ceiling beams, dark wood counter front etc.  From the architectural point of view this was the highlight of the day, it's pretty rare to find a pub like this apparently still in original condition.

A small handful of locals (and one friendly dog) were chatting at the bar, the only other noise was BBC news on the telly in the background.  Soon there were only two regulars left.

Contrasting with my notes from Saturday, I noticed the 50/50 football split here was Everton/Tranmere.

To finish, back to the town centre again, and the Coach and Horses: 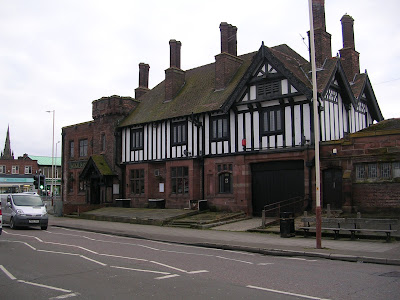 My architectural expertise (Yeah, right!) lets me down here and I'm not sure how old this building is.  Is it brewers' tudor from the 1920s/30s or is it a truly ancient building?  I suspect the former.

Anyway, inside it's knocked through into one large comfortable room, which was quite busy with chatty groups when I arrived.  No real ale so another Guinness was in order.

No food in here, everyone was in for the beer.  There was racing on the TVs but I couldn't see anyone watching.

P.S.  I haven't heard any Pink Floyd all day, my stalker must be taking a day off.
Posted by Phil Wieland at 23:59