The light sprinkling of snow was melting away as I headed out in a bitterly cold wind for a second visit to Old Swan.  I started in Wetherspoon's Navigator which I skipped last time because it was "only" thirteen years since my last visit: 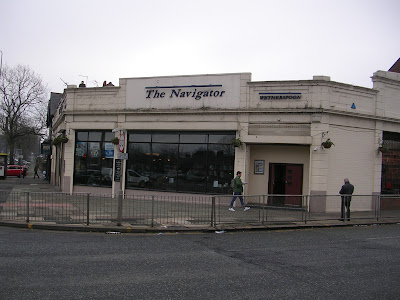 This nicely decorated branch of the chain in a former supermarket always seems very busy, and at 11:30 on a Saturday morning it was full of people eating breakfast, and/or drinking beer or coffee.  I sat at one of the few free tables and enjoyed a great pint of Titanic Iceberg.

What is the point of having BBC News on the telly with no subtitles?  Actually, with a succession of cold-looking reporters standing in the snow it was obvious what the story was.

On to the Derby Lodge: 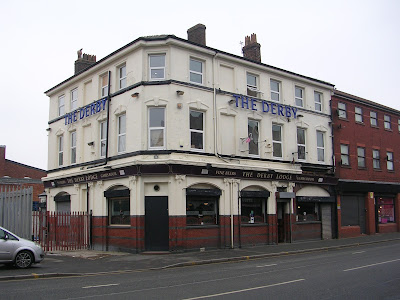 Everton were on the telly and the whole pub was decorated with blue flags and the like; it's unusual to see a pub nowadays that doesn't have equal support for red and blue.  (Maybe they take all the blue down and put up red for the later Liverpool match, but I don't think so.)

The place was busy with footy fans but I managed to find a seat to swig my Guinness and watch a bit of the match - Everton scored.

Oddly there were two other rooms in the pub which were much quieter.  There was no-one at all in the back room and the lounge side had just one customer, also watching the match.

Another odd thing I noted was that one of the Everton banners fixed to the ceiling belonged to another pub, the Black Horse.

Next, the Corner Tavern.  As you can see, it was too cold to wait for a gap in the traffic before taking the picture: 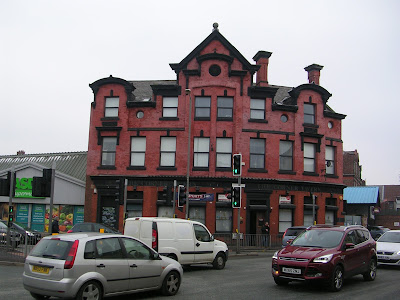 The footy was on in here as well but no-one was watching it, and the handful of regulars were all sat at the bar chatting, so it was much easier to sit in comfort in a quiet corner and write this while enjoying my drink.

One of the regulars fired up the jukebox and to my surprise we got Pink Floyd.  Is it just coincidence, or are all old codgers in pubs PF fans?  That's the third time this year.  Maybe I've got a stalker who's trying to impress me!

I headed up Green Lane past the Wellington (see below) to take a picture of the Melbourne which is tinned up on Streetview, but lo and behold it was back in operation: 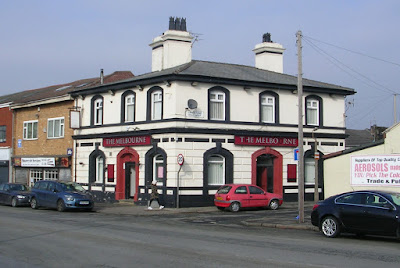 In the very pleasant interior, which has been knocked through since I was here twenty years ago, were a handful of regulars.  One shouted the barmaid to come out and serve me.

Once again Everton were on the TV but no-one was watching, and soon after I sat down they were losing.

Finally I doubled back to the Wellington: 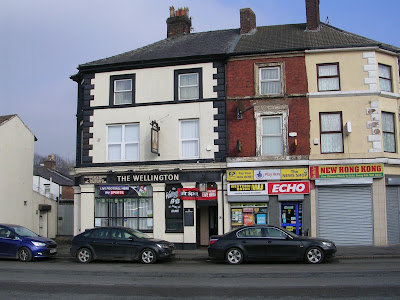 What a nice pub this is, quite a few regulars chatting in the two sided interior, and for the first time today I took off my coat because it was lovely and warm.  (Possibly because I was sitting next to a fan heater.)

In the bar side, where I settled to drink another Guinness, the walls were covered with 50/50 LFC and Everton banners, shirts, etc.  I particularly noted the "Vous ne marcherez jamais seuls" scarf.

On the telly was some marathon followed by cycling, which no-one was watching.

Five minutes after I sat down the chatty group on the next table got up and moved to the other room.  Was it something I said or did?  I was relieved to see they wanted a game of pool, the table was in the other side.

Coming soon:  I think under the water to Moreton might be a good trip.
Posted by Phil Wieland at 23:20