The Merseyrail strike being called off the plan was back on, and a series of trains carried me to Heswall station, from where a pleasant one mile stroll through the sunny countryside took me to the village of Barnston and the Fox & Hounds: 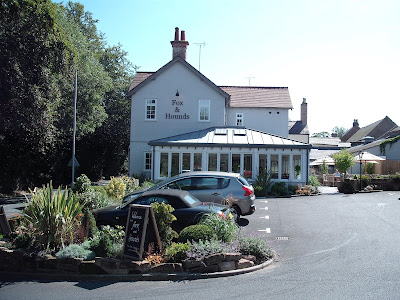 Here I found a large country pub aimed mainly at diners, of which there were already a few at a quarter past twelve.  The bar room is a beautiful antique space dedicated to drinkers.  The rest of the rooms are a little more modern in styling, still very pleasant.

Quiet jazz music was the sound here, with conversations in the background.

Six real ales were on, I had a great pint of Landlord.  I perched at a high table near the counter and watched the activity as waitresses dashed about.  Something was wrong with the printer, resulting in some drinks orders going missing.

Next, another walk through the countryside to Thingwall and the never before visited Bassett Hound: 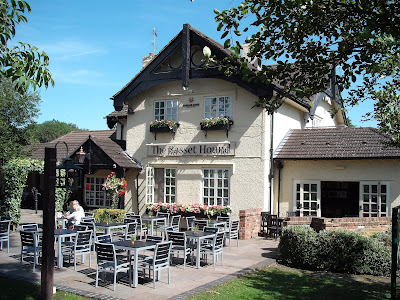 Here I found a Greene King chain dining pub, with a very pleasant knocked through interior.  There are some very old wooden beams in the ceiling, but I think they might be decorative rather than genuine.

At one on a Saturday afternoon the place was almost deserted, the waiting staff messing about and chatting because they had no work.  This really is a well done pub, I hope it gets more customers later.

A number of people who had been drinking outside carried their ale inside.  Had it started to rain?  I couldn't see out from where I was sitting and I wondered about getting wet as I have another significant walk to the next tick.

I needn't have worried, it was still unbroken bright sunshine as I set off towards the former Cherry Orchard, now just known as the Toby Carvery Arrowe: 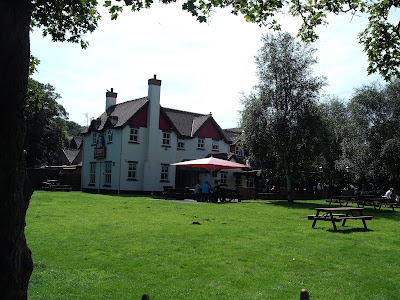 I was a bit concerned that with the name change this had crossed the line from pub to restaurant and that they would no longer welcome drinkers, but I needn't have worried.  I walked up to the counter and ordered a lager.  The three handpumps were clearly purely decorative.

I sat in the "quiet side" where there were very few people, the dining area at the other end of the pub was busier, and the chatter of happy diners mixed with the clink of cutlery and crockery, under the quiet muzac.

A steady stream of people came to the counter for drinks, were they also drinkers like me or diners coming back for another drink?

First sighting of a "Book now for Christmas" poster this year!

Next, a shorter walk to the Arrowe Park: 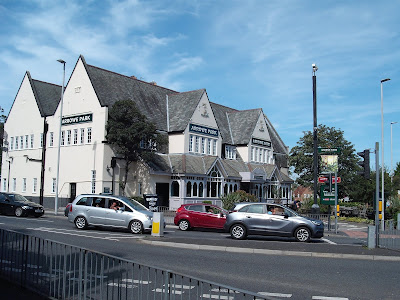 Another GK chain, Hungry Horse this time.  As I entered I failed to spot the handpumps and ordered a lager, but I later saw all the clips were turned round, so no loss.

A standard Greene King food pub, clean, tidy, nicely decorated and well maintained as they usually are.  Mid Saturday afternoon it was ticking over and most of the customers I could see were not eating.  Perhaps the diners were in the other side of the large building.

Now, a choice:  Do I head to the Stirrup which I believe to be closed, just to get a picture?  I haven't got one from my 2010 drink there.  Or do I go straight to the next target?

Long way round, of course: 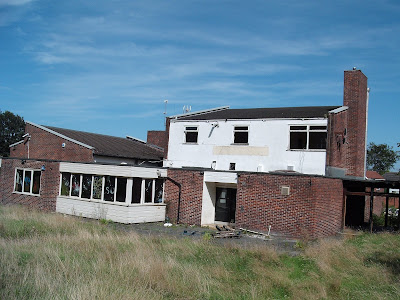 Looks a bit sad, doesn't it.

Next, on to the Woodchurch: 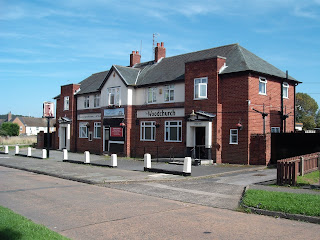 In contrast to the previous pubs today, this is a down market plain clean and tidy estate boozer.

A dozen or so locals were keeping the place going.  I had another lager and sat in the bar side.  There is another side but I'm not sure if it's operational.  I'm no expert but it looks to me like the original 60s decor and layout have been refurbished away.  I must say I have grown to like the new Carling glasses, decorative and easy to hold.

The main sound in here was the juke box, with chatter underneath.  Thankfully Sky Sports News on the big screen was silent.

England only need 302 to win now.  Anyone with a ticket for Monday, time to make alternative plans I think!

Another quandry:  The next step is a short walk to the main road, where I can get a bus back to Liverpool.  Do I get off that bus and nip up to the Wirral Hundred to tick off another pub I've never visited?  If I don't do it today it'll be an odd isolated one requiring a special trip.  But can I drag myself off the bus home?

The decision was helped when the first bus to arrive wasn't to Liverpool, so I rode a few stops and then jumped off and walked up to the Wirral Hundred: 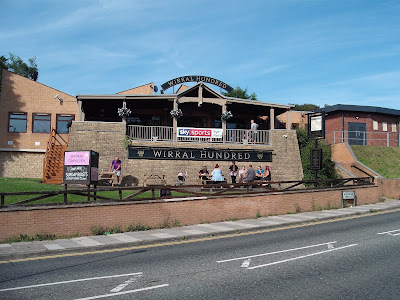 I'm told this pub was built in the late 1970s, a rare time for pub construction.  I felt the outside looked a little scruffy in places, but the inside was very tidy and pleasant.  The style and layout inside are possibly original.  Was it always one open room like this?  Probably.

No real ale, so time for another lager.

Quite a few regulars were creating a gentle hubub of chatter.  Meanwhile, the cricket was on the big screen, so I could watch a little of England's humiliation.  Actually they seemed to be postponing the inevitable quite well.