Not so far afield today, just two stops on the train and a short walk took me to the impressive building that is the Grapes: 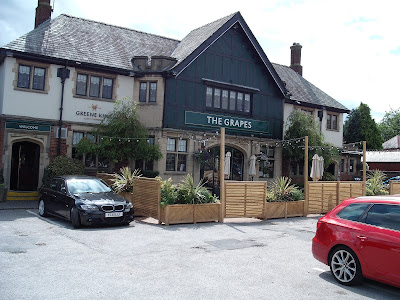 This rather fine construction, which I'm guessing dates from the 1930s (But I could be decades off.) contains a standard Greene King chain pub with the "Pub and Carvery" brand.

It was ticking over fairly quietly at one on a Tuesday, mostly with diners.  My pint of some summer-themed ale was not at its best, I'm afraid. 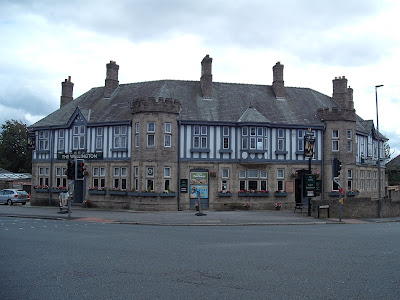 Another rather wonderful building, this time almost Baronial in style and, I suspect, also dating from the 20s or 30s.

Any history inside has mostly been refurbished away, I think, although the odd old-looking feature remains, such as the entrance doors and their stylish handles.  Could the leaded windows be original as well?

A Greene King dining place once again, this time with no obvious brand on the menu.  Pretty empty, but with a few groups finishing their meals.

I selected Landlord, and it was maybe a touch on the warm side but otherwise excellent.  Keen to play with my new toy, Google Pay, I was disappointed to find there's a £5 minimum on card payments here, so I had to use real money.  If Wetherspoons can accept cards for a £1.79 pint, why can't everyone?

Now, the longest walk of the day, on towards the centre of Prescot, and the Royal Oak: 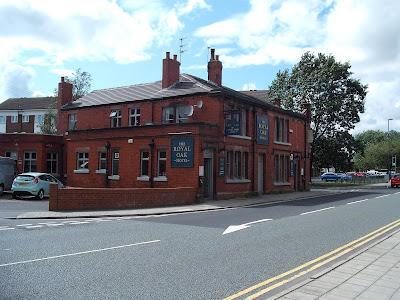 A rather good two sided boozer this, well cared for and full of happy regulars.  OK, not exactly full, but doing pretty well for a Tuesday afternoon.

Two handpumps, one clip turned round, so lager for me.

The music, a good selection including The Who, was very quiet, almost drowned by the lads playing pool.  (Lads?  They're as old as I am.)

On my last visit, in 2012, I particularly noted this place as spotless and well cared for, and it still is.  Plenty of other places could take lessons on maintenance and cleaning from this pub.

Just a short walk away is Tommy Hall's.  But it's not called that any more, it's been formalised as the Thomas Hall.  I can remember when it was the Hare and Hounds: 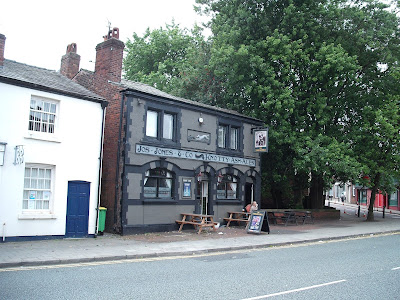 Did it always have that splendid Knotty Ash Ales sign on the front?  Ah, there are a number of old pictures of the pub on display inside and the answer is no, it was covered over by a sign saying Tommy Halls and before that Hare and Hounds.

Inside, this two sided traditional boozer hasn't changed at all.  Plain, clean and tidy, but not as immaculate as the Royal Oak.

Half a dozen or so regulars were keeping it ticking over, and providing gentle chatter underneath the racing commentary.

No real ale so lager again for me.

Next, over to the other side of Prescot, and the Clock Face: 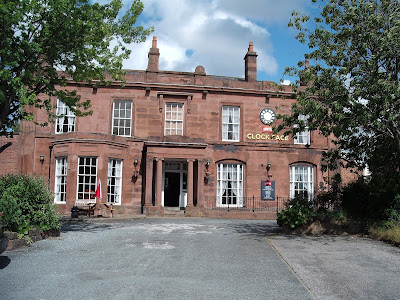 No changes since my last call in 2015 here, a fine interior and quality Thwaites real ales make for a good pub.

The layout is partly knocked through but retains separate rooms.  Only three or four customers at four in the afternoon.

I would have thought a building like this would be a real money spinner as a dining pub, but apparently not.  There was no sign of menus, nor of anyone eating in the mostly-deserted interior.

Finally, a double back to a pub I've just walked past, the Sun Inn.  I hadn't noticed before the large sign on the end of the building.  Shame it's obscured by a billboard.  And a blank billboard at that. 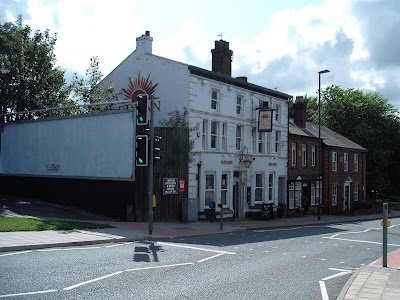 What a great pub this is.  The lounge side consists of three rooms served from a counter in the corridor.

Pretty quiet at half past four, although a noisier group came in just as I was retreating to the cool quiet empty back room with my excellent Oakham Bishops Farewell.

The gang soon moved to another room, and peace descended once again, with distant chatter and very quiet music mixing with the sound of traffic - My chosen seat had a straight line view along the drinking corridor to the open front door and the street.

Six pubs visited, no new ones but they were all at least four years since my last visit, mostly more than that.  So, time to get the bus home (Perhaps via the chippy).