A chilly grey day saw me on the bus to Garston, and I soon reached my first destination, the Dealers Arms: 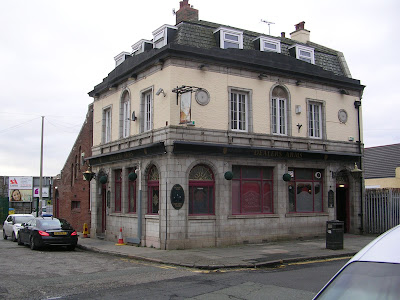 This place has been thoroughly done up since my last visit, I think, creating a very pleasant two sided pub, although hiding the dark wood panelling. There were no other customers at two on a Tuesday. I ordered a pint of Guinness and after a short delay the barmaid returned with a half-full glass, "I'm sorry, we've run out and the delivery hasn't come, you can have this for free." So I did! The pub was rather chilly inside, otherwise very comfortable and, as is usually the case nowadays, spotlessly clean and well cared for.
I have always had a suspicion that a pub which has "run out because the delivery hasn't come" is actually on its last legs and the non-delivery is because they haven't paid the bill. But I have no evidence to support this theory, and in fact a Manchester pub I used to drink in regularly which was always running out of Guinness is still going strong years later. 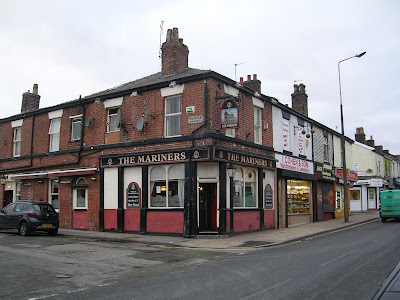 A short step down the road to the Mariners, a one roomed local with traditional decor. Unlike the last place, it was doing a good trade with lots of regulars chatting. Clean and well cared for again, the atmosphere was warmer both literally and figuratively, as I relaxed and consumed a paid-for pint of Guinness. It's unusual to see a pub which has none of the three bog-standard keg bitters, Tetley, John Smiths, and Worthington. Instead, they have Banks's Amber.


Next, across the road to the George. 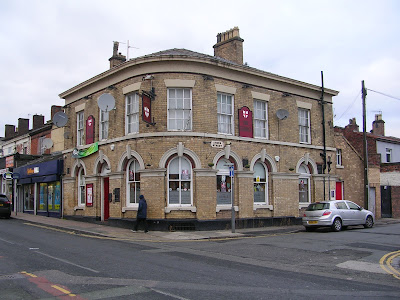 Another cheerful local boozer, two sided, and in the middle of redecoration - I was a bit worried about touching the paintwork in case it was still wet - It wasn't. Again, a quiet background of chit-chat created a friendly atmosphere, although it wasn't as busy as the Mariners. Various regulars came in and out, not all for a drink.


It's hard to assess the quality of the interior in mid redecoration, but assuming they replace the paint-spotted upholstery when the work on the walls is complete, it will be very pleasant. My enjoyment of another Guinness was perhaps slightly reduced by the paint smell but I can't really complain about that.

That completed the main street in Garston, so I headed off into the side roads for my next targets. 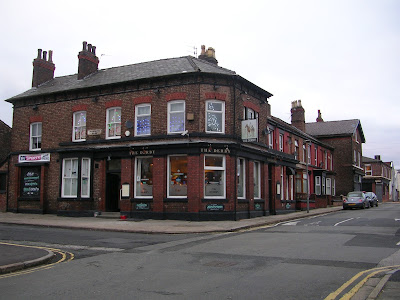 The Derby is another street corner local, also ticking over nicely on a Tuesday afternoon. Once again, spotless and well cared for with the quiet background chit-chat making a friendly comfortable atmosphere, although the music was perhaps a touch loud. The friendly and efficient barmaid was busy sorting out one of the regulars' phones with a new SIM card, in between serving everyone.

Next call was the Palatine, which has a rather odd interior, and with just two other customers the atmosphere was a little on the dead side. Nonetheless the place was, as with all today's ticks, spotless and well cared for. There were lots of adverts for food at cheap prices, I wonder how that works on a quiet Tuesday: Does the barmaid fire up the grill/microwave when necessary, surely they can't afford a cook on standby?
More customers came in while I drank another Guinness. I think we were all following The Chase on the telly.
Of course, the down side of researching a pub guide is that sometimes you have to miss out good pubs in order to tick off others, so the two pubs I didn't do in Garston were the Good Beer Guide listed Masonic, and the rather fine Swan, both of which were offering real ale last time I visited them.
Posted by Phil Wieland at 23:28