And I thought it was cold in Garston!  Bright sunshine and a heavy frost saw me on my way to Bootle.  My first call was at Jollys, a 1950s construction I would guess: 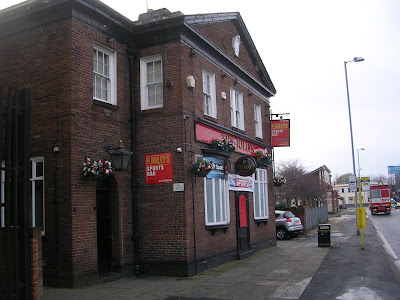 Inside is a traditional two bar boozer, well looked after.  I'm not sure if the other side was in use as I joined three customers in the bar side, for a pint of the black stuff.
I suppose the Christmas music is now inevitable but, bah humbug, it's still two weeks away!  Later, one of regulars had a word with the barmaid and a quick fiddle with the computer saw Rudolf the Red Nosed Reindeer replaced by Nik Kershaw.

Having written well looked after, I took a good look at my surroundings and it's really spot on, the bench seats recently recovered, the vinyl flooring with a dark marble pattern was free of marks and scratches, and so on.

Next, a Wetherspoon's I haven't visited since 2004: 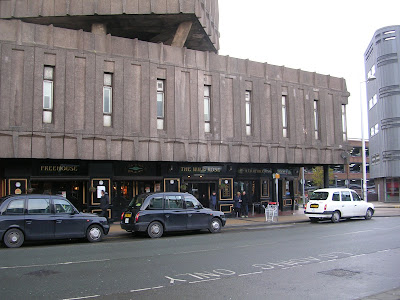 Behind the brutalist architecture, the Wild Rose (I was going to call it the Briar Rose but that's in Birmingham, I think.) seems smaller than the average spoons.  It was pretty busy on a Tuesday lunchtime, and there appeared to be a queueing system for food orders which I only noticed after I'd stood at the other end of the bar.  Luckily the queue didn't apply to drinkers so I was soon enjoying a gorgeous porter from Ringwood.  Watching as I drank, I realised there was no queue after all, it must have been a gang of diners all at one end of the bar.  Good!

There were plenty of real ales on, but they didn't seem to be selling much so it must be difficult to maintain quality.  Mine was great, anyway.

Twenty years ago this pub was the scene of a disagreement when the barmaid illegally refused to top-up some very short pints and was backed up by the manageress when we complained.  We didn't argue further, so avoiding an altercation, we just dobbed them in to Trading Standards and Wetherspoon's headquarters.  Today's measure was acceptable (By modern standards, he says grudgingly.)

Just off the main street I aimed for the Beaconsfield which now seems to be called Beaky: 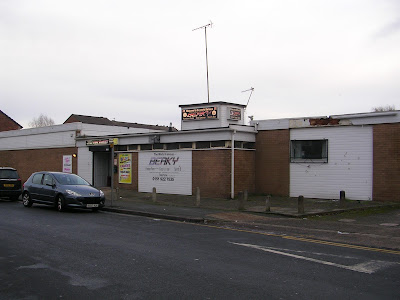 Inside this large social club sort of place I headed for the small lounge bar, once again clean and tidy, where I joined two other customers and the barmaid who, after I was served, went back to chatting and warming herself on the radiator.  With only four of us in the place, I was inevitably drawn into a cheerful conversation about Christmas dinner and presents.   Eventually, I escaped.  "Are you going back to work?"; "No, just to another pub!".  Inevitably, I only came up with a better reply half an hour later:  I should have said "This is work." and showed them the book.

On in the arctic conditions to the Cat and Fiddle: 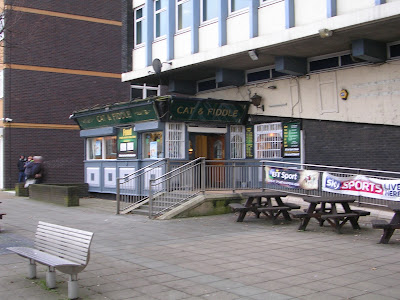 Unusually located in the bottom of a tower block, this rather good pub is totally unexpected if you haven't been here before.  All four handpumps were in use, but my pint of Liverpool Organic 24 Carat Gold was hazy and well past its best.  Very disappointing, I probably should have rejected it.

Perhaps it's time I sorted out how to submit beer scores on whatpub.com, this was definitely a 1.0, or even 0.5, I think.  Of course, that is to miss the point of whatpub, I would also need to put in 4.0 for the porter in the Rose, and 0.0 for the other two.

Quite a few people in the place, both groups and loners, were keeping it ticking over, but no-one wanted real ale.

I left to find it seemed a bit warmer outside, maybe, and it was raining.  I headed quickly to Oriel Road for trains home.
Posted by Phil Wieland at 23:13