Cambridge - Is There Anybody Home?

A survey well away from Merseyside, and I was expecting everywhere to be packed on the Saturday before crimbo but I was in for a surprise... 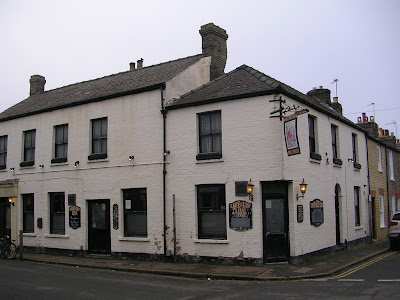 I started at the Live and Let Live. Is it open? This plain street corner building looked shut as I approached, but then as I recall it always does! Anyway, I tried the door and it was unlocked so I entered the pleasant antique interior to find I was alone. After a couple of minutes the barman appeared, and (after washing his hands) served me a beautiful pint of Oakham Citra, a long standing favourite of mine. Obviously first of the day, but he must have pulled it through before I arrived because it was spot on. With six or seven ales on this must use up a lot of beer!
As I enjoyed my ale, a regular came in and had a pint of Butcombe after his first choice, "free beer", was refused!

The decor, wooden floor, benches, tables and chairs and an old-looking wooden bar front, is all fake I think.

A few more people came in as I finished my ale. 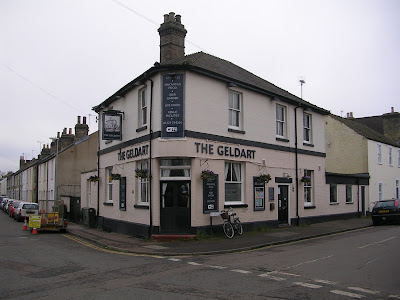 Another classic street corner boozer, and once again completely empty when I arrived. Six or so real ales were on offer, this time I chose Adnam's Ghost Ship which was excellent, although the first taste was a little thin after the Citra (Which they also had here.)  The barman and chef had no-one else to serve until a regular eventually turned up.

I was intrigued to see the specials menu included zebra as well as horse, kangaroo, crocodile and buffalo! One or two meats I've never eaten!

Now, on to Calverley's Brewery where the limited opening hours luckily include Saturday daytime. Just a couple of plain rooms, whitewashed walls and wooden furniture. I started with a taste of their Cherry Sour which was so wonderful that I immediately ordered a schooner thereof, that is 2/3 pint*, without tasting any others. This place was also quiet, but a lot busier than the previous two.

They had one cask ale on gravity serve, perhaps I should have tried that, but the Cherry Sour was gorgeous!

*Actually, in Australia where I drank a lot of them, a schooner is 3/4 of a pint, so I'm wrong to call 2/3 a schooner.  Is there a correct term for the increasingly popular 2/3 measure?  Perhaps a "craft pint"?? 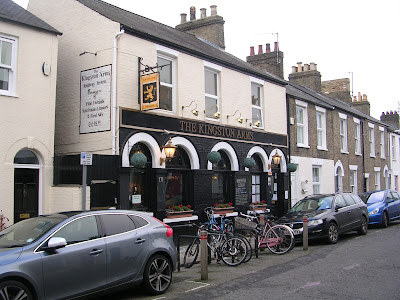 Finally, the Kingston Arms, a pleasant comfortable boozer serving umpteen real ales. After the strong flavour of the cherry sour I chose something a bit plainer, a pint of Woodfordes Wherry which was excellent. Quite a few people were in, with mulled wine and mulled cider being sold along with the real ales.
The real fire and plenty of chatty customers made this the "warmest" pub of the day, although in actual degrees it was probably the coldest. Perhaps the first two were busier like this by now? (14:00) Or maybe not.
Posted by Phil Wieland at 15:44