Today I set off in bright sunshine which didn't last, the bus eventually took me to Tuebrook from where I walked northwards towards Anfield and Everton.

My first call was the King Charles: 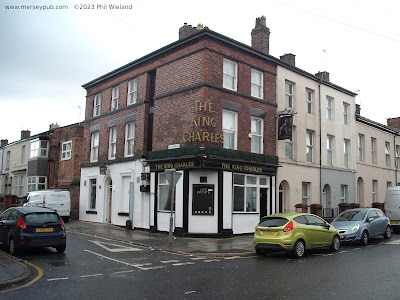 A beautifully cared for corner boozer, partially knocked through but still with a couple of separate areas, including the front room served through a hatch.

Last time I was in this area it was shut, perhaps opening hours are linked to home matches.

Just a few regulars were keeping the place going, their chatter mixing with the music.  As kick-off approaches I imagine it'll get a lot busier.

The pub's name has gained new meaning in the last few months, does that make any difference?

I wonder how many more "limited hours" places I can tick on a match day?  I wandered around some back streets to a pub I last visited in 2000, at least two attempts since then have found it shut.  But today the Midden is open.  RESULT! 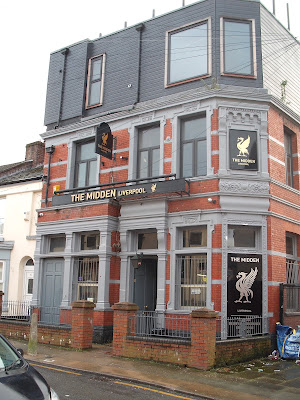 Once again I found a beautifully maintained boozer partially knocked through but retaining separate areas.  No customers at all, sadly, just me and the barman, who initially thought I'd come to fix the towels in the gents, so he obviously wasn't expecting any customers yet.

Where does the name come from?  As far as I know a midden is a dung heap or rubbish bin, which seems an unattractive sobriquet for one's local boozer.  It used to be called the Rydal, after the road on which it stands.

Nonetheless my second Guinness of the day was carefully served and in good nick.  Oh dear, you can tell today's survey is not about cask when I start reviewing the quality of the Guinness!  (If we're going down that road, the pint in the King Charles was also very good.)

The dark green decor in here is particularly attractive, it really looks nice.  The lighting, an ancient looking chandelier above my head and some impressive industrial style lamps in the main bar room, looked very good to me.

You can see an "extra" storey in the picture, I suspect the main business model here is to provide accommodation and a bar on match days, all those Liverpool fans from London, Dublin, and so on need somewhere to stay and if I was in that position a cheap room with a bar downstairs a couple of hundred yards from the ground would be exactly what I would look for.

Where next?  Closer to the ground and this survey is going better than ever, how about the never before visited Kop End: 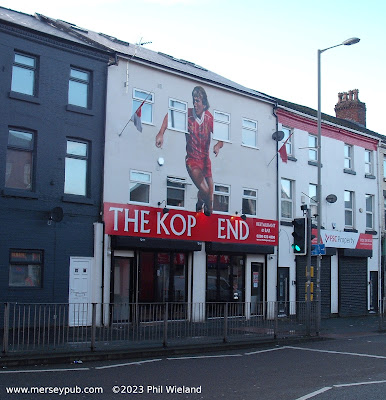 Are you here for the match asked the barman, "er, actually no", I replied.  Come for the quality pint then, he suggested, and I agreed.

A modern shop conversion with one open room with pleasant plain decor.  Everywhere you look is a telly showing Sky, reporting the FA cup matches this afternoon.  Mr Stelling seemed back on form, I'm happy to report.

In the comfortable booth seating each seat has an LFC logo on it and there's an impressive mural of Liverpool players on the back wall of the smoking area visible through the large rear windows.  Anyone who knows anything about footie would be able to name them, I'm sure, but not I.

Another place that will get busier nearer kick-off, I think, but it was already doing fairly well with a dozen or more customers.  Their chatter was drowning out the footie.

I headed on towards the stadium, passing the splendidly named "you'll never wok alone" noodle shop.  My next match day target was the Albert, almost under the stands, but the shutters were down so I think this one has finally gone.  (But see later) 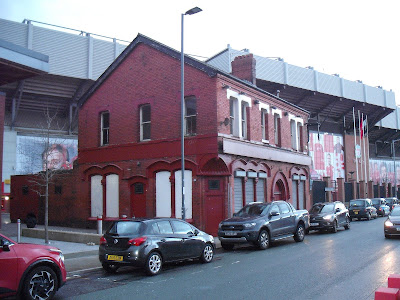 I carried on, skipping the Twelfth Man because I did it in 2018 and on to the Glenbuck: 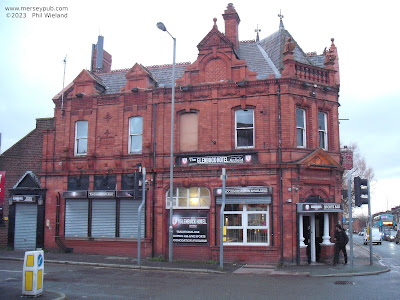 Another one with match day related opening hours, last visited in 2004 when it was called the Stanley.  My notes from then, describing a plain well cared for two sided pub, are still precisely correct.  Another one expecting lots of customers later and mostly empty now.

Sky Sports news again, I watched as the city of my birth went from one nil up to two one down, while the bar staff ran cleaning fluid through various beer lines, getting ready for the hoped for rush.

Now, on my way here I passed another match day pub which was open, so I turned back towards the stadium.  On the way I saw at the Albert the shutters were just going up.  I didn't wait for the possibly long process of opening so I'll have to come back on another match day, perhaps for an afternoon kick-off.  I carried on to the Sandon which I last ticked back in January 2000: 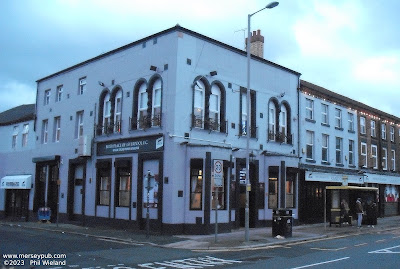 Well it's good to tick a pub 23 years after the last time but a little irritating that there were no seats available and my Guinness came in a plastic glass.  With its historic connection with the club this place is obviously special on a match day, and four hours before kick-off it was already very busy.

Nice traditional decor, well maintained, makes this a rather pleasant pub, the chandelier and miniature chandeliers above the counter adding to the ambience.

Five "required" ticks - one brand new - is a good result so I think it's time to go home...

(For new readers, required ticks are firstly pubs I've never been in, and secondly those I've not visited in the last five years.  Because I was particularly busy ticking in 2018, pubs all over Merseyside are moving into the second category frequently.)

Pub of the day: Midden, I really love the dark green decor.
Beer of the day: Guinness
Miles walked: 2.2
Maybe coming soon: No idea.
Posted by Phil Wieland at 23:34