The plan for yet another train strike day was to do some overdue ticks in Everton, but yesterday I received an email from a friend (Thanks, Mike) to tell me that Wetherspoon's were closing their Bootle outlet on Sunday so I headed there instead, to the Wild Rose: 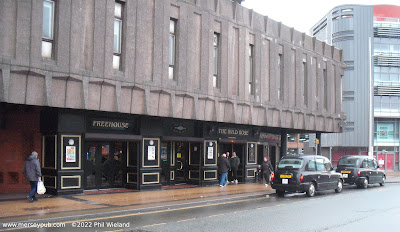 With only a day and a half to go they were already running down their stocks, and the only real ale left was Ruddles, which I found to be unexpectedly tasty.  I had thought that on the final Saturday the place would be jam packed, but I easily found a table in a comfortable booth.

I wonder what the reason is for the sudden closure just before the busiest week of the year.  I checked the Echo website and they only got the news on Tuesday so at least it's not one of those annoying "I'm the last person to know" situations.  Will it become a pseudo-spoons like some other closures have (e.g. Picturehouse), or is that the end of this site.

The pub was quite busy but I couldn't tell how many were there to say goodbye, I imagine it's pretty popular at this time on a Saturday anyway.

I checked my records and purely by coincidence this pub has just recently re-entered my target list, as the previous visit was five years and five days ago, all the more reason for a farewell tick.

Now I'm here it would be foolish not to collect some more, and in fact there's one never visited before, so let's try the North Park Tavern: 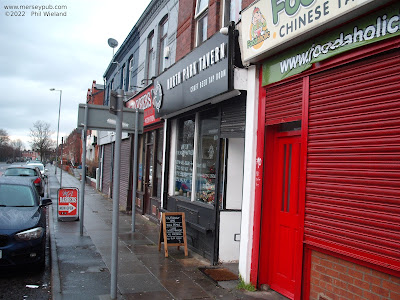 A standard shop conversion with no cask.  A good choice of keg stuff though, and just for a change I went for the "boring" option and had a fine pint of Paulaner.

Not as busy as the dying spoons, with only five customers and it was very cold in here.

Christmas music at a pleasant volume mixed with quiet conversations.  The pleasant decor makes for a rather good pub but they really need to turn up the heating.  I know fuel prices are high but people won't come out for a pint if they have to wear a warm coat, gloves and a hat.

Speaking of fuel prices I was amused to receive an email from my supplier telling me the price of gas has gone down by 0.001 pence per kWh.  This is going to save me one penny per year apparently.  (Needless to say, they simultaneously raised the electricity price by a much larger amount.) 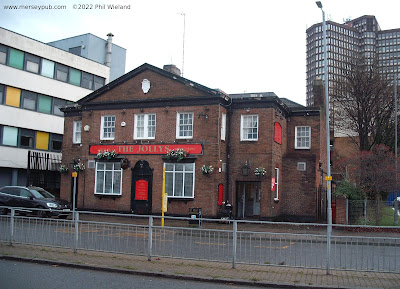 A plain well kept boozer this and, thank goodness, it's warm inside.  Ticking over nicely with about fifteen or twenty customers being served by a friendly efficient barmaid/landlady.

World Cup footie was on the tellies, silent I'm pleased to say, the sound in here being gentle pop music and mixed conversations.

The larger other side was empty, in fact out of use I think, probably very wise and helping with keeping the in-use side warm without breaking the bank.

I must say I liked the Christmas tree in here, covered in white and sparkly decorations with the occasional gold bauble.  I'm no style expert so I can't say why, but it just seemed to fit perfectly in the room.

What to do next?  There are plenty more ticks in Bootle but then I've got to spend ages on two buses to get home.  Alternatively, I could break my bus journey with a pub at the change point providing, of course, a toilet break as well.  I think that might be wiser, on balance.  Or I could split the difference and do one more Bootle tick and do the toilet break as number five.

OK, you talked me in to it, as I had to walk past to get to the bus station; directly opposite the doomed Wetherspoon's is Hyper Bar which I haven't been in since 2004: 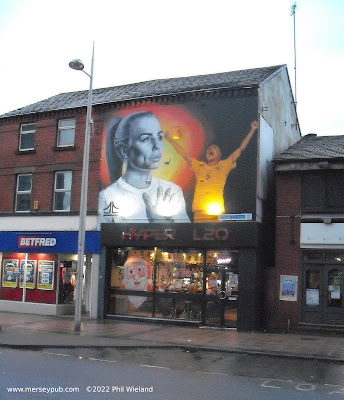 A well done modern pub this with no craft or cask pretensions, most seemed to be drinking Carling.  I had a Guinness and bagged the last free table in this popular place.

Just after I sat down a group of half a dozen lads on some kind of crawl came in, they raised the sound level by a few decibels but were well behaved and enjoyed their lagers.

I could hear some music but it was mainly drowned out by cheerful chatter.  This is what a boozer should sound like!

Croatia were beating Morocco as the second half started, but no one seemed to be watching.  Another screen had pop videos, matching the mostly inaudible background music.

Time to start for home, with a personal needs break and required tick half way, at the Jolly Miller.  Sorry, way too dark for a photo; here's one from my preceding visit in 2017: 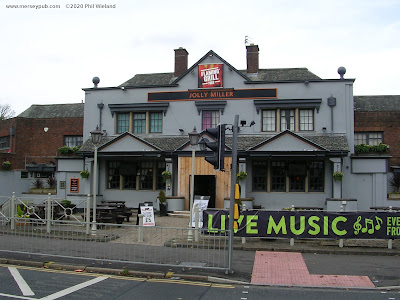 This Greene King "flaming grill" outlet was unsurprisingly busy given the date, but I was able to find an un-reserved table to enjoy my excellent pint of Abbot.

Lots of the happy chattering customers were obviously out for a pre-Christmas celebration, I wondered how busy it will be next Saturday, Christmas Eve?  I think in the 21st century everyone is ensconced in their warm home by the 23rd and the Christmas Eve nights out with my friends that I remember thirty years ago are no longer the way to go.  In case that sounds like a complaint, I should own up that I don't expect to visit a pub after a meet with friends on Wednesday 21st until another get-together on Wednesday 28th.  Maybe?  Or will I do a survey on the Friday?  We'll see; are the trains running?

Considering this ought to be one of the busiest nights of the year I'm afraid this pub wasn't that packed; there was plenty of food coming out, but still a number of empty tables.  That doesn't really bode well for the industry.

Four required re-visits and one first timer, I think I'll catch another bus to take me home.  Farewell, Elisa Day.

Pub of the day: I think I'll award this to the Wild Rose as a goodbye gift.
Beer of the day: Abbot
Miles walked: 0.8
Maybe coming soon: Everton
Posted by Phil Wieland at 23:04