I usually try to avoid visiting the same area twice in a month, but my Anfield trip two weeks ago had revealed some more potential football day targets, so on a Saturday with a 12:30 kickoff I made a repeat visit.

I started at the Paisley Gates which I had decided from the internet was closed, and it was, although from the outside it seems poised to open at any moment, so perhaps at full time? 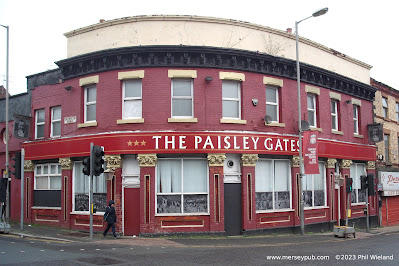 On towards the ground and another one I expected to be closed, the Oakfield: 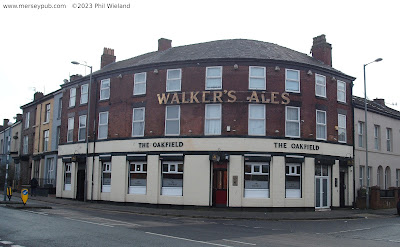 I last drank here in 1998 and I have passed by noting the shutters down on a number of occasions since (including two weeks ago), so I was startled and very pleased to find it open.

My notes described this as a two sided pub, it has been knocked through in the intervening twenty five years, creating a wide open space ideal for match day crowds.

Needless to say, twenty minutes after kick off the place was empty, just two other customers and I.  The helpful barmaid warned me they haven't got the match on before pouring me a Carling.

The decor in here is plain but very well done and beautifully maintained.  The end where I sat had some historic ceiling plasterwork.

I would like to apologise to the owners and staff of this pub for mistakenly describing it as closed for the last ten years.

Next, even closer to the stadium is the Albert.  Curses!  Two weeks ago the shutters were down, this time they're up, but the doors are still shut.  Looks like I need to be here at full time!

On to the King Harry where I had better luck: 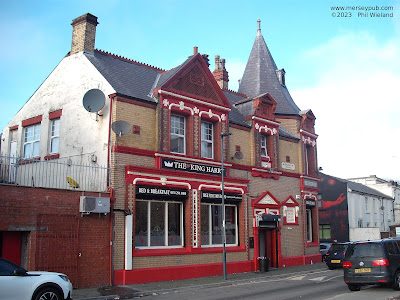 Another one where my notes, from 2004 this time, say "two sided", but it has been knocked through since.  Now a large open space ready for the throng, and once again plain and very well cared for.

There was a slight delay at the counter, as the till system had crashed, but soon I was able to pay for my Guinness.

Quite a few people in here; unlike the Oakfield they had the match on the TVs.

On a table near me half the the bar staff were enjoying their chippy dinners, they don't need to be on duty during the match.  But at full time it'll be all hands to the pumps - literally!

I tried to hurry my drink, because the pubs around here will all be packed come half two, even though I'm heading away from the ground.

I went out aiming for Walton Road, but hang on a minute, what's this right next door?  Thank goodness I stepped back to get another picture of the King Harry, or I never would have noticed the Lock Inn: 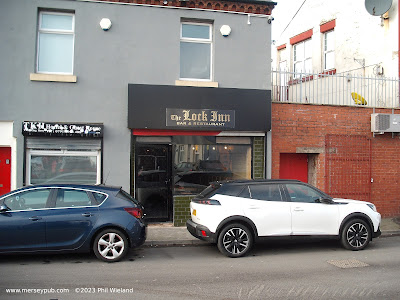 Now I didn't expect this!  A brand new three roomed bar with splendid decor of dark green ceramics and rough wood panelling.  Streetview reveals this building has been a noodle vendor, a chippy, and burger place in the last few years - I much prefer its new role.

Quite a few people were in but it wasn't full, I bet it is after the match.  I had a Heineken from the rather limited draft range.  The music was mostly Irish themed, until Donald Where's Your Trousers came on!

I looked at the posters, they have a deal for £40 of unlimited food and drink for ninety minutes before kickoff plus ninety minutes after the game.  That's a good deal for an ale drinking footie fan, I think.

The match was on the telly in one of the little side rooms but I couldn't see it from my seat.

Staff and customers kept saying hello to me and eventually I was offered free food at which point I revealed I was leaving soon because I was researching my beer guide.  Apparently they've only just opened.  I hope this place does well, it deserves to.

Next, the probably closed Fountains Abbey: 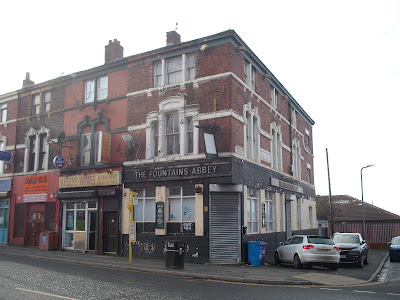 I think this one might be truly closed, unless it opens for Everton matches?

Not far down the road is the Halfway House: 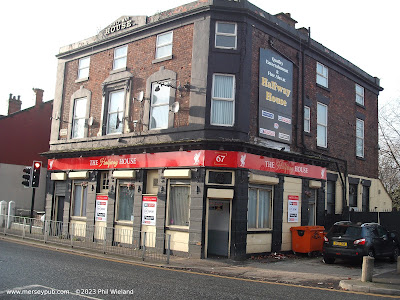 This one is a rather good two sided boozer, the match was on the telly with about half of the twenty or thirty customers watching.  Although when the reds made a 94th minute attack everyone watched.

I noted a database tweak, this has had an exterior redecoration and a name change from New Halfway House in the last few months.

Maybe one more?  I toured the Halfway House and couldn't find the gents, eventually giving up and heading out on to Walton Road, so obviously I couldn't go far before the next gents.  So I wandered up towards Everton territory, and into the Wetherspoon's Thomas Frost which my database says I haven't ticked since 2015.  Sorry, no picture this time.

I've been in here on a number of occasions after an Everton match, but I was a little surprised to see it just as busy after Liverpool were playing.  Still, an urgent visit to the gents and then an excellent pint of Abbot, the ale of the day, made this a good visit.

I wonder if the crowds today mean this pub won't be under threat when Everton move on?  While they will obviously only have half as many "bonus Saturdays" it's probably still a viable operation.

As I enjoyed my pint there was some kind of "fracas" with idiots throwing missiles in and out of the front door.  It was over as soon as it started, and the consensus of the fans near where I was standing was that it was the most exciting part of the day.  Which doesn't say much for the match.

I exited through the police lines and headed for the railway station only to discover that there weren't any trains to Liverpool (Poor planning on my part.), so I walked on and caught a bus which needless to say was soon stuck in traffic, taking ages to reach the city centre.  Even this cloud had a silver lining, as we passed the Phoenix which I have always believed to be closed, and it appeared to be open - One for my next time in this area.

Pub of the day: The Lock Inn, it is always pleasing to find a new one.
Beer of the day: Abbot
Miles walked: 2.9
Maybe coming soon: New Ferry
Posted by Phil Wieland at 23:25