The Last Pub On Scottie Road

In my collection of books is The Pubs of Scottie Road by Terry Cooke (Bluecoat Press, 1999), a fascinating study of the pubs and people of the area.  Having been advised last weekend that the Throstle's Nest, one of the last surviving pubs on Scotland Road, had been put up for sale and is therefore under threat of closure, I thought I ought to pay the famous thoroughfare a visit before I'm too late.  The last time was 2003.

I commenced my researches just north of Scottie Road, at the Crown Vaults: 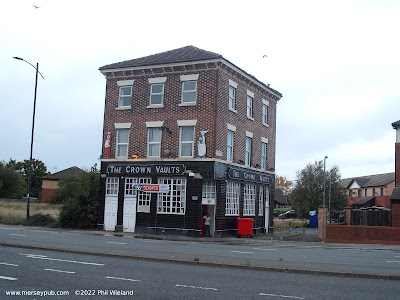 This place seems to have slipped down the cracks between surveys before, because I've never been in.  I would never expect to get a new tick in an area like this, but here we are.

I found a slightly tatty interior knocked through to form one open room.  On looking round more closely I decided that tatty was unfair: Everything was well cared for except for some tired upholstery; the floor, walls, and decor being in fine nick.

No cask, needless to say, so I enjoyed a pint of Carling.

Two other customers were in, one vaping in a cloud of smoke.  There was footie on the telly but only the barman was watching it.

I wandered around the area, photographing the derelict Cunard and Parrot, last visited in 1999 and 2003 respectively: 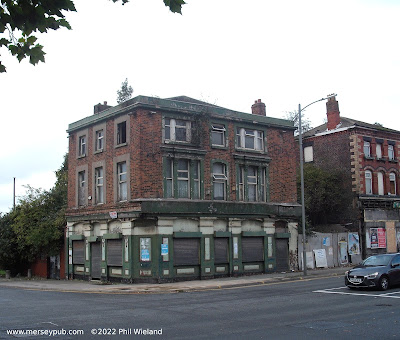 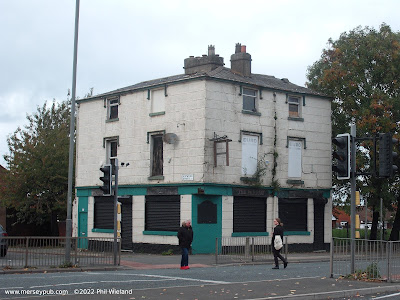 Next, the trigger for today's trip, the Throstles Nest: 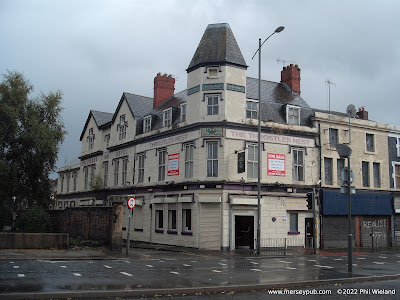 The revolving door at the front remains, you don't see those on pubs very often.  Inside I found a nicely done room with a group of six regulars plus the barmaid at one table enjoying pleasant chit-chat.  She quickly jumped up to serve me a Guinness (I really hate it when the staff pause to finish their conversation before deigning to serve me.  No such problem here.)

For some reason I was offered an extra third of a pint or so to go with my pint.  Usually this is when the pint is mostly froth, but not today.  I didn't catch what she said, but thanked her for the free bonus.

There's a small notice affixed to the wall "England is going Smoke Free".  How old is that!

The barmaid departed, for a ciggie probably, leaving the counter unstaffed.  I wonder what would have happened if I'd wanted another drink?  I guess one of the regulars had been left "in charge" and would have served me.

Outside it got darker and I could see the wipers operating on the cars, so it looked like I was going to get wet.

Actually, I found only very light rain as I crossed the road to get a good shot of the closed Eagle Vaults next door: 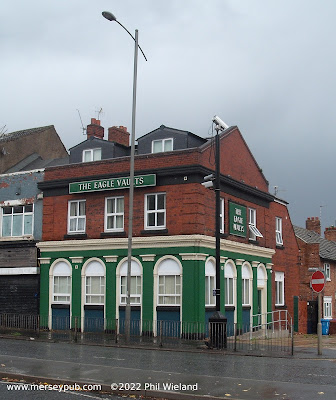 That's it for Scotland Road I'm afraid, so I headed off into the back streets to the Britannia, a great example of late 60s pub design, I think.  It looks like it is no longer operational, a sad loss: 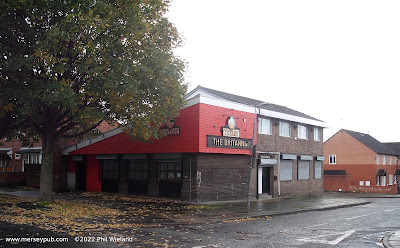 On to Vauxhall Road, the next parallel main road into town, and to the Castle: 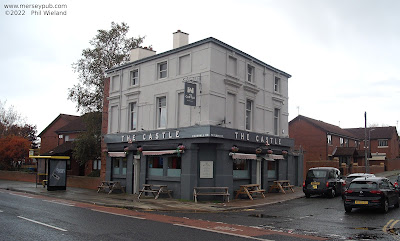 A surprise as I entered this compact two room boozer - It was really busy.  My Guinness was quickly poured by one of the two barmaids who were the only women in the crowded pub.  I found a chair and table on one side of the room, everywhere else was occupied.

The noisy chatter in here was unusually lacking in swear words, I noticed.

It's wonderful to find a plain boozer doing a roaring trade nowadays, the previous two ticks could do with a share of this custom, I think.  I was possibly the youngest person in the pub, not something I expect to find nowadays!

Something else you don't see very often nowadays, a tray of sandwiches appeared and was left on a table for anyone to eat.  The regulars soon tucked in.

On towards the city centre along Vauxhall Road, the next blob on my map is the Glass House, and, exactly as it was last time I was here in 2018, there's no signage on the outside but it's still open: 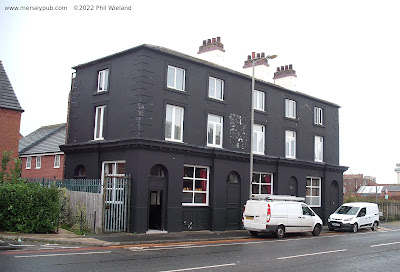 Not quite as busy as the Castle but still doing good business at three in the afternoon,  I wondered what the name of this pub actually is, it hasn't had a sign on the outside on my last two visits.

Inside is one shallow wide room across the frontage with the counter in the middle.  At one end is a partitioned off "snug"; I think this might be some historic 1950s or even 1930s architecture.

As I looked around I spotted the writing above the darts blackboard.  That says the Glass House Darts Club, so in the absence of anything more trustworthy I'll take that as the name of the pub.  Alternatively, I could christen it "The Anonymous Arms"!

As usual in places like this, I was the only person who didn't know the staff, everyone else who came in immediately had a chat with one or both of the barmaids.  What a wonderful friendly pub this is.

One more place to look at, just a little further towards town is the Eagle: 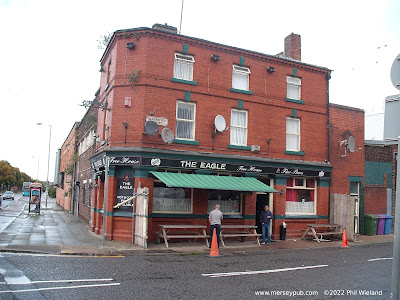 This tiny corner house was so busy I had to stand at the end of the counter and make my notes, there were no seats available.

Racing was on the tellies but not many of the exclusively male customers were paying attention.

A group departed and I was able to bag a seat in the corner.  I've got a vague recollection that I tripped on the step up to this corner last time I was here, but I'm not sure.  Anyway, I made it safely this time.

For the third time today, I was pleased to find myself in a busy boozer full of cheerful drinkers, it's almost like the fifteen years of decline since the smoking ban hadn't happened! (Apart from the lack of smoke, of course)

OK, five pints to the good, it's time to go home.  What a great pub crawl this has been, so many places similar to those I drank in back in the 1990s, it's really good to discover that some of them survive.

Pub of the day: The Anonymous Arms
Beer of the day:  None
Miles walked: 2.5
Maybe coming soon: Undecided.