I headed out on a largely unplanned excursion into town today and on a whim I started at old favourite the Lord Warden, which is now called Sketch: 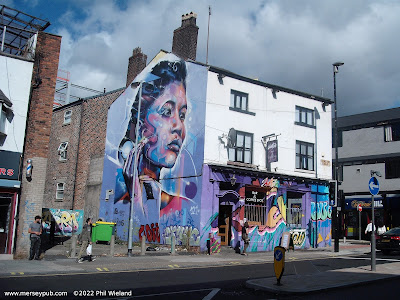 I used to be a regular in here, friends and I competing in the quiz every week when it was the Lord Warden, which was a traditional boozer which for some of its history served good real ale.  Now it's received a spectacular redecoration inside and out and become Sketch.

The transformation didn't involve anything structural, the old layout remains almost unchanged except you can't get round the back between the two sides any more.  The decor inside matches the outside, bright colours and rough wooden planks on the walls.

Not many customers in at two on a Thursday, the barman eventually dragged himself away from his pals to serve me a Guinness.

While it is always a shame to lose a traditional boozer, I must say the new styling is bright and cheerful and rather attractive.  Sacrilege? 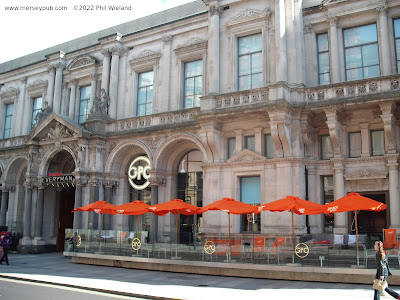 I thought the entrance would be outside but in fact it is in the Met Quarter shopping centre. A number of food counters plus a large bar area at one end.  I ignored the app ordering system, I wasn't alone in that, and walked up to the counter where I ordered a half of something 7% from Carnival, whose taproom I visited last week.

The barman, presumably new, poured it and then fiddled with the till for ages, eventually asking his colleague how to sell a half, the answer was that the draft beers only come in schooners, so he had to pour the half into a goblet and add some more.  Seems daft, especially as the goblet has a half pint line.  It cost £4.50 by the way.

Eventually I was able to sit down and taste this peculiar chocolate beer which I have to say I didn't like very much.  Usually I like sours, but that taste didn't seem to go with chocolate milkshake.  Actually, I did grow to like it more as it went down, but certainly not a favourite.  I'm left with the worry that they sell so little that it has gone sour in the keg and the tang is not intentional.  Oh well, I've got my tick and I don't need to come here again for a few years!  Having said that, the food options looked very tempting in here, so maybe I'll come back for dinner some time.

Just along from the front entrance of Met Quarter is the Beehive, not visited since 2012, so let's move away from modern places to something more traditional and try that one next: 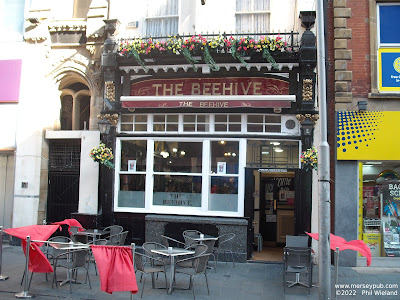 Well well!  If there was one place I would have predicted had lost its cask in the ten years since I was last here it would have been this splendid traditional boozer, but no, three handpumps on the counter and my Landlord was excellent.

The front part of the place was quite busy so I headed to the back, only later spotting the notice informing me that this area is reserved for food service only until five.  Oh well, no one complained, and there were plenty of empty tables.

The pub was ticking over nicely at four on a Thursday, the music mixing with gentle chatter from the regulars.

Where to after the Beehive?  I had an idea:  How about the other Beehive, last visited in 2013 so long overdue for a tick just like its namesake: 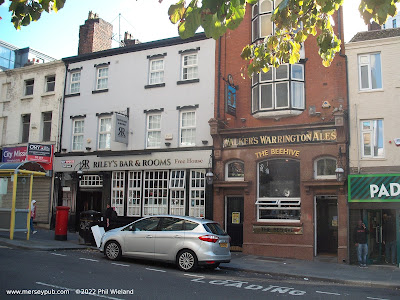 This place is completely unchanged, I'm pleased to report, and it remains a classic town centre boozer.  When I say it hasn't changed, it has obviously been redecorated a few times in the intervening years because it's immaculate in here.

The walls are covered with pictures of film stars and movie posters.

The music was mostly drowned by chatter in the somewhat echoey room.  In between serving, the barmaid joined in the animated conversations.

My Guinness came with a shamrock drawn in the head.  I can report that in the dozen or so pubs I visited on my recent visit to Ireland I saw this exactly zero times, and that included three or four of the main tourist pubs around Temple Bar in Dublin.

I checked my trains home.  Four of the next five are cancelled and the remaining one is late, what kind of service is that?  I said some time ago that if we re-nationalised the railways it would all fall apart, and it looks like I was right.  I keep seeing adverts for Northern Rail (who are controlled by the DfT, so effectively nationalised), surely if they put more effort into actually running trains and less into advertising things would be better.

Opposite where I was sitting was a Wurlitzer Jukebox.  How do those bubble tubes work, I wondered?  Good old Google to the rescue, the tubes are filled with an organic liquid which boils when warmed at the bottom, so the bubbles are actually vapour and they gradually condense as they rise and cool.

Having done the Beehive it would be rude not to tick Riley's next door - See picture above.

Another place that I'm happy to report hasn't changed significantly since I was here in 2013, although it has had a good refurbishment.  As I observed last time it is popular with racing fans.

Again a beautifully maintained traditional interior, I hope this pub and next door continue for eternity.

Perhaps not as many people in as in the Beehive, but still ticking over with a high proportion of the customers watching the horses.  I wonder where the nearest bookie's is, presumably they have to nip out to put their bets on.  Oh, of course, it's next door to the Beehive, so two doors down from here.

I rechecked the trains, after the cancellations the next few services are all apparently running, so I think my extra Guinness (I was originally intending to go home after the Beehive.) has worked out OK.  Although an hour's worth of passengers on one train might be a bit crowded!  Perhaps I should drink slowly and get the second train out, which is also shown as running.

I dawdled over my beer and the second train was not overcrowded and soon took me home in relative comfort.

Pub of the day: Beehive, the first one, for the quality ale.
Beer of the day: Landlord
Miles walked: 1.75
Maybe coming soon: To be decided.
Posted by Phil Wieland at 23:42