I headed by train to Walton, the last time I'll have to pay as I get my pass on Monday!  My first port of call was the Prince Alfred, not open last time I was here, but it seems to have been renamed: Much of the signage calls it Fratelli but, as you can see above, at least one sign still says Prince Alfred.  Perhaps they didn't have a long enough ladder!

Inside I found an unexpected interior, very nicely done with a small-ish bar side, and the remainder laid out as a restaurant, the whole looking rather good.

Only one other customer in at three on a Friday, I hope they get some diners later.

In keeping with the restaurant vibe, the background music was classical piano, a nice change from the usual pop.

Three more lads came in to join the one at the counter as I enjoyed my pint of lager, pleased to have ticked a "pub" not visited since 2004.

Quite a long march, next, to the Cuckoo Hotel.  To be honest, I came here for a picture of a closed pub, but no, it's open: A perfectly good two sided boozer, with quite a few customers on a Friday afternoon.  Two different racing channels on the tellies, both silent, and some of the regulars were taking an interest and filling in betting slips.  In fact, the quiet corner I'd chosen was right in front of the betting slips rack, causing a number of people to apologise and reach over my head!

The pale grey and dark grey colour scheme is very well done, the interior looks like a 1960s refurbishment with matchboarded walls and counter front and a false ceiling over the servery.  I didn't look in the other side.  Another one last visited in 2004, so long overdue.

Now, on to the real reason for today's trip, a brand new (to me) place, Jaxon's: Sorry about the picture, it was getting a bit dark by now.  A rather good micro this, quite small but not the smallest I've seen.  Plenty customers in at half four, but still a few free tables.

I succumbed to the temptation of an apricot, peach, lime and cheesecake (Or something like that) beer called Oscillate Wildly which was rather good but a little too weird for my taste, perhaps. Better than the Carling in the last place anyway.  Actually, it got better as I drank and by the end I was really enjoying it.  It came from Team Toxic, who are something to do with Liverpool Brewing Company.  I was pleased to learn that, by chance, I'd chosen a local brew.  One of the other casks was from Big Bog, also local, the other two were from breweries I didn't recognise.

As I enjoyed my pint the place was gradually filling up, soon there were no free tables.

I looked round:  Oh dear, I'm the only one in here old enough for a bus pass!

I resisted the temptation of Big Bog Kaleidoscope at 6.5% and headed on, to Wetherspoon's: 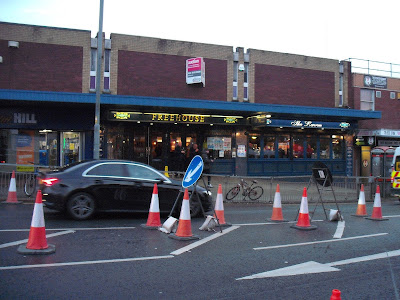 For some reason this is the least recently visited pub in the area, so let's tick it.  At five on a Friday it was, as expected, pretty busy, but there were still one or two free tables, one of which I bagged after I'd got my pint of Black Sheep Dead Parrot, which was rather tasty.

Not much food trade here, in fact I couldn't see anyone eating, just a large quantity of happy drinkers of all ages.

My mind wandered onto the subject of busy pubs.  On Wednesday I was in the Ship and Mitre which was packed because Liverpool were playing, but we still managed to find a table and enough seats.  Rewind twenty or thirty years, and it would be standing room only, as would any pub on a Friday evening. Now that I'm officially old, I don't think I could cope with that!!  So, did the pensioners in the 1990s stay at home on a Friday, or did they stand with everyone else?