Called to do my duty at the Blood Donor centre, I took the opportunity to visit a few pubs along Dale Street, starting at Rigbys: 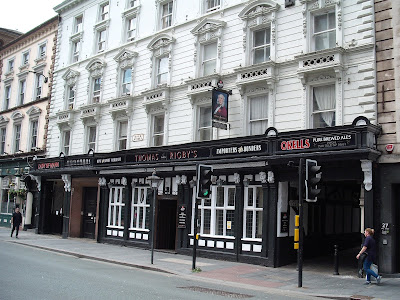 Here I found compulsory table service, hand gel and form filling, and just two other customers.  (I later spotted some more in the courtyard at the back.)   The three staff had very little to do.

There were just two real ales on, I had a superb pint of White Rat.

Just a short stroll along Dale Street is the Vernon Arms: 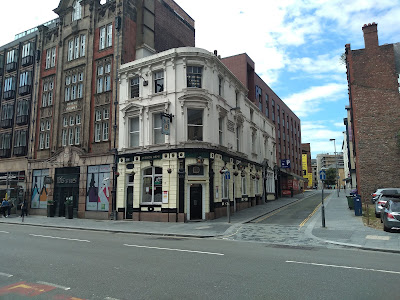 There was a chain across the entrance and I had to sign in and be allocated a table before being allowed in the pub.  They had a full range of real ales on offer, but the rum porter was somewhat past its best, the first off pint I've tasted post lockdown - I really should have rejected it.

The place was ticking over nicely, with almost every table in the front part occupied, so I was assigned a table in the back room, on my own.  Are they trying to tell me something?  Perhaps the patch on my arm was off-putting.

A little further up is the Excelsior: 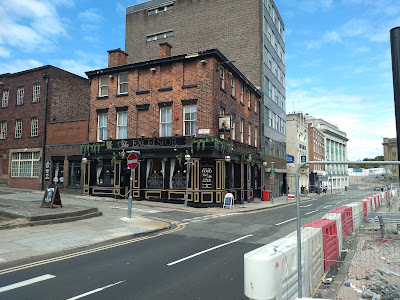 The barman insisted I treated my hands as I entered (I would have, anyway) but there was no requirement for ID.  Only two real ales on, and I selected Landlord which if I'm being really picky was maybe a little over-chilled but pretty much spot on when it was brought to my table.

I must complain that a strongly lemon scented hand wash spoils the flavour of the ale until it wears off ones hands, a more neutral gel would be much better.

Only one member of staff was visible, ably looking after the six or so customers here.  As with the other two visits today, the soundtrack was quiet muzac and chatter.

I was glad to see the pubs back in action, especially the Excelsior and the Vernon which I had noted boarded up a couple of months ago.
Posted by Phil Wieland at 23:09