Back to Prescot only two weeks after my last visit.  The buses are on strike so I had to take the train, a less frequent service and a longer walk.

I started by checking the Mermaid Tavern, located in part of what was the Red Lion.  I had noticed it, not open, last time but they're ready now, having launched just eight days ago. 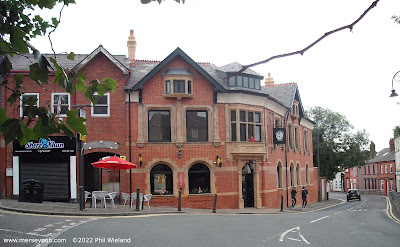 Very pleasantly done out inside with comfy leather sofas and bare brick walls.  Is that parquet floor genuine?  I think so.  Did the Red Lion have such a floor?  I don't remember.

No cask, so I had Guinness, at five quid the most expensive I've bought for some time - I can't see your average Prescot woolyback paying that much!

Only one other customer at half twelve, a scruffy bloke* watching the footie on the telly and muttering to himself; now that's more like the sort of clientele I expect in this friendly down market town.  He had a pint of something lager-coloured but it wasn't going down very quickly.

[* To be fair, no scruffier than me.  Except I won't wear shorts in public in the UK.]

Built on a hill, I remember the Red Lion had rooms on different levels.  As they've only used about half of the old pub, everything is on the same level here.

Next, just off the main shopping street is Lord Strange: 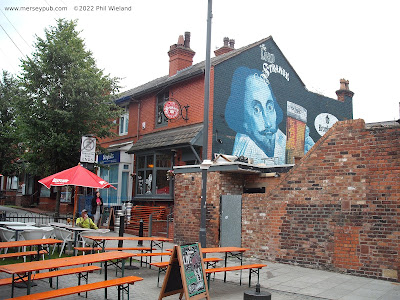 Opened in 2019, this splendid shop conversion has managed to survive through COVID.  The draft beers seemed to all be German lagers including one I've never heard of (Maxlrainer), except for the Guinness tap.  I chose the always good Erdinger, shame they don't have the Dunkel which I like even more.

Six quid for my pint, again we're not aiming for the local drunks here.

There's more seating upstairs, and quite a few tables in the (pedestrianised) street but with only one other customer these aren't really required at one on a Saturday.  Also upstairs is a display of optician's equipment from the building's former use.

My Erdinger came in the proper glass, of course, but it was a promotional one with a picture of Herr Klopp who I think is still the manager of a local football team.  It also had a pint line.

That reminds me of something from a couple of weeks ago:  I enjoyed a pint of the wonderful Cain's F.A. in Doctor Duncan's and it came in a proper F.A. glass.  I was surprised to see a crown stamp on the glass, is this a positive result of Brexit - we can have British markings on glasses - I wondered.  No, according to the barman they acquired loads of old glasses when they took over the defunct brewery.

The rain that had been threatening arrived as I finished my pint, but it was only very light.

On the main shopping street, I found Eden: 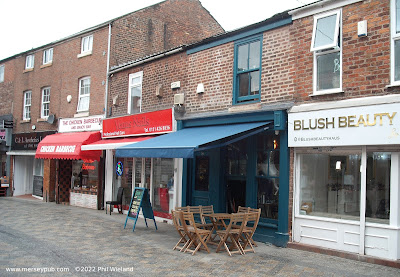 The tiny downstairs space was mostly full of a hen party, I paused for the "sorry, private function" but it didn't come, in fact I was called to the counter by one of the staff.  I nearly baled out when there were no fonts on the counter, but then spotted a number of taps on the bar back.

Unable to find a seat as the live musician was setting up in the only free corner, I retreated upstairs where I sat alone on the tiny mezzanine.  The barmaid followed me up to provide a candle on my table, not really necessary!

Downstairs remained busy, with loud conversation echoing around the space, and mostly drowning the quiet background music.  Then the musician started.  A bit loud, perhaps, but he was rather good*.  Jamie Higgs, it said on his guitar.

[* Until he did Coldplay, we get more than enough of that crap on the wireless.  Having said that, his rendition of I Will Fix You was much better than that whiney multimillionaire.]

Of course I can, there's another bar on the same street, called Spanish Caravan: 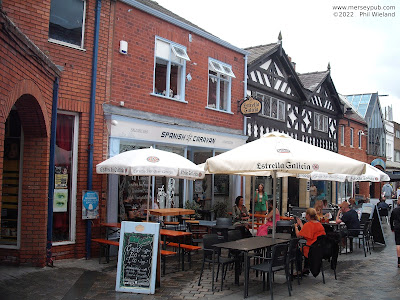 Another shop conversion, with a pleasant interior plus tables out on the street.

There seemed to be some kind of private function going on upstairs, and there were no vacant seats downstairs so I took my schooner of Estrella 1906 outside, luckily the rain had stopped.  They wouldn't sell me a pint of this rather wonderful beer, probably wisely as it's 6.5%, so I paid £5 for a schooner.  Unusually dark for a lager, and very tasty, I certainly recommend it.  I think you'd probably call it a Bock?

I enjoyed the full continental experience, with shoppers passing up and down the street while plenty of customers sat with me in the open.  Two attractive young ladies on stilts proceeded past, promoting local entertainment and pausing for selfies with children and adults alike.  I wonder how long this sort of activity can continue?  Hopefully indefinitely.

Having achieved the fourteen hundred milestone, I think I'll head for home.  Prescot seems to be a place of contrasts nowadays, mixing the down market boozers I visited two weeks ago with up market cafe bars.  What a great combination.  When was the last time I saw live music at two in the afternoon?

Pub of the day: Difficult to choose one, the Spanish Caravan stands out, because it was number 1,400.
Miles walked: 1.2
Maybe coming soon: Crossens, Southport, Heswall
Posted by Phil Wieland at 23:40