Two trains delivered me to Kirkby station from where it's only a short walk to what was the Mariners when I was here ten years ago.  Now it's the Mainbrace:

Apart from the name there's no change in the intervening years, it remains a beautifully maintained 60s estate boozer with a knocked through interior creating one large open l-shaped room.

Ticking over nicely at one on a Saturday, with locals aged eight to eighty, and some kind of event in one corner involving a buffet.  Shall I steal a buttie?  I think not.

I am predicting that my next three targets will be very similar to this one, although remembering back 25 years when I was a regular drinker in Kirkby I seem to recall the Mariners was the nicest of the pubs in this area.  It had carpet when the others were lino!

It is less common nowadays to have a bookies in the pub car park, but they've got one here.  A bloke was standing by the pub doorway monitoring my approach as I photographed the pub, sometimes this is a bit of a warning sign, I have been shouted at in the past - Why are you taking a picture of me?  No such aggro here and as I approached the entrance he struck a pose and asked "Where do you want me?"

Another 60s estate pub, this time there's no carpet at least in the bar side where I joined a dozen or so regulars.

In what I suspect will be a common theme of today's trip, the interior is again clean and tidy and well maintained, although if I'm nitpicking the bench seat I sat on was due for a recovering.

My beer was poured in a glass from the fridge.  Totally unnecessary in my opinion, it just increases the condensation dripping on the table.  Luckily beermats were available to soak it up.

I looked around the room at the nine other customers; all seemed to be on Carling, as was I.  See, I do know how to fit in!

On to the Johnny Todd:

This one looks a touch down at heel from the outside, but the knocked through interior is rather well done and very well cared for.  The bare brick walls look good, but it's only wallpaper!

On my previous vist ten years ago this was called the New Johnny Todd, and the name remains in some signage, but mostly it's back to the original name.  Johnny Todd is a sea shanty, the melody of which was used as the theme tune to Z-Cars, some of which was filmed here in Kirkby.  It's also the theme tune of Everton.  (Er, the football team not the place.)

The quietest pub so far, only three or four other customers were with me, watching Wimbledon on multiple tellies.  The previous two places had racing on.  Three more blokes later added to the custom.

Now, on to the most important target of today's excursion:  I last drank in the Falcon in 1998, would I be able to tick it again 24 years later?

Once again, a plain but well cared for 1960s local pub.  This time there's a kids party in one side, the screaming occasionally disturbing the peace in the other room.

I was particularly intrigued by a picture on the wall.  Six naked women sitting on the edge of a pool, viewed from the rear.  Each woman had a Pink Floyd album cover design drawn on her back.  I delved in my memory, I've got Atom Heart Mother, ???, Dark Side, WYWH, The Wall, and Animals.  Since I put away my vinyl and ripped all my CDs on to hard disk, I listen to the jukebox and never look at the sleeves any more.  I guess this is one of the reasons why vinyl is making a comeback.  I cheated via Google, the one I couldn't get was Relics, of course.  Actually, I'd thought "See Emily Play", but I couldn't tie it to an album name.  A quick search of the internet reveals that I'm probably the only person who hasn't seen this image before. 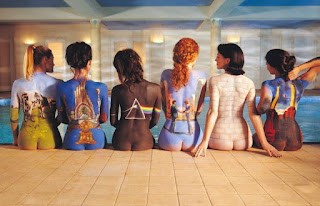 The noise from the party was rather loud, I must say, but four or five regulars and I put up with it.  The buffet certainly smelled good.

Pub of the day: Four well cared for classics, the prize must go to the Falcon for the desirability of the tick.
Miles walked: 1.5
Maybe coming soon: Formby, Crossens
Posted by Phil Wieland at 23:45