Yes, I'm back!  I apologise for the break in blog entries, which was caused by a number of trips away followed by building work at home.  Time for a jaunt to Southport, where I started in the Tap & Bottles:

They seem to have expanded into the unit next door since I was last here, back in 2015, so it's no longer the tiny place I visited then.  Nothing else seems to have changed and, most importantly, the quality of the ales remains excellent.

No need for the expansion when I visited, at twelve thirty I was the only customer as I enjoyed my pint of White Rat - One of my all-time favourite beers.

A delivery of kegs and casks kept the barman busy, and then finally another customer arrived.  I hope it's busier later.

Next, somewhere completely different:  Hidden in a back alley is Enelle's Glass House, never before visited:

Definitely at the down market end of the scale, but none the worse for that.  The higledy-piggeldy interior is well decorated and well cared for.  At one on a Thursday there was quite a crowd of what I suspect are locals, enjoying the lager at £2.50 a pint.  Some were watching the silent racing on the TVs but the majority were laughing and chatting in a throng around the counter.

The part of the pub in front of the counter is a glazed extension to the building, hence the name, I guess.

Now, unusually for a research trip, I need to visit a Wetherspoon's - I suspect it's an error, but my database says I haven't been in the Sir Henry Segrave since 2014, so let's correct that omission: 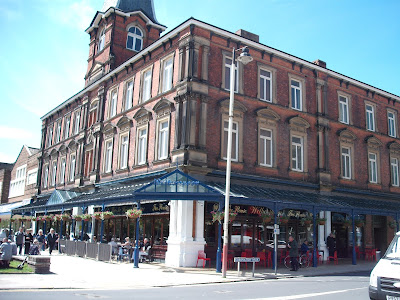 On a sunny Thursday in term time we know what to expect here, and it is full of mainly older people enjoying a cheap lunch.  They had about ten real ales on but I didn't look further than the wonderful Titanic Plum Porter, another of my all-time favourites.  (I had a couple of their Chocolate Vanilla Stout in Blackler's yesterday, also gorgeous.)

I seemed to be the only person not dining, they were doing a roaring trade in curries, fish and chips, and so on.  I don't understand why my shares aren't going up!

As I savoured my Plum Porter the lunchtime crowd began to thin out, and the staff were able to clear the debris from many of the tables.  I was amused by one lad playing a game like Tetris, trying to carry as many glasses, mugs, and so on in one journey, his puzzle made more complex by the fact that some of them weren't empty.

By the way, I'm told the new 'spoons in Heswall is now due to open on 28 June.

A quick deviation before the next destination to confirm that the Falstaff and the Cheshire Lines are both closed, a sad loss in the case of the latter.

Next, why not try for yet another very different type of pub and another new tick - Southport Market:

This is one of those places where a large room full of tables is surrounded by various food counters and you order whatever you want and your buzzer goes off when it's ready for collection.  In the middle of the room is an island bar with six handpumps.  Only one had a clip which can be a bad sign but my pint of something pale from local brewery Parker's was excellent.

The wafting odours were very tempting but I resisted.  As I looked around I realised that the down side of this format, from the owners' point of view, was the number of staff idle, poised waiting for an order.  Customers were thin on the ground at three on a Thursday.

I wonder how many places like this are in my area; the only one I can call to mind is the Baltic Market in the Brewery Quarter.  By coincidence, I'm planning a visit to that area soon.

Finally, a more traditional boozer:  I need to tick the Southport Tavern which I last visited in 2006 when it was the Albert Hotel, and had real ale.  I wonder what it's like now? 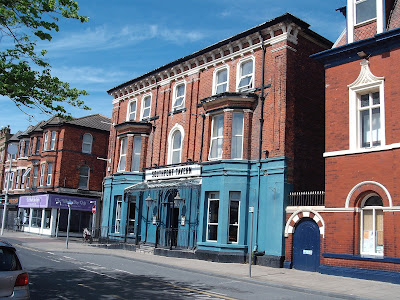 My notes from '06 include the word grubby, but as I expected this is no longer the case.  A well looked after spotless boozer is what I found this time.  I have said a number of times that the scruffy ones have either tidied up or closed, and in this case they have tidied rather well.

At three the place was mostly empty, with just a few customers creating a background chatter to mix with the music.

Two handpumps but no clips so I finished my survey with a Guinness.  I was impressed to note a shamrock in the head.  (I know it doesn't improve the flavour, but it surely indicates care by the server.)

More customers arrived as I drank my pint, and the conversation began to drown out the music.

So, in conclusion, five pubs all very different and all, I think, surviving well post pandemic.  Two never before visited bringing my total to 1,379.