Today I again targeted a Good Beer Guide pub I've never visited, and with the weather set fair it was the ideal time for a Wirral countryside trip.  The bus seemed to take for ever, but at least it gave me the chance to spot the post-lockdown status of a number of Wirral pubs.  Every one I saw was still operational, a surprising and pleasing result.  Eventually, I reached the Red Fox: An enormous house dating from the second half of the nineteenth century, containing a Brunning and Price multi-roomed food oriented up market place, with umpteen handpumps offering a wide selection of ales, mostly from nearby breweries.  The interior has been excellently preserved and it's very pleasant.

My spot on pint of Brightside Odin had covered 51 beer miles according to the sign, and was one of the most travelled on the list.

At three on a Thursday afternoon they were doing a good trade, although there seemed to be more cars in the car park than there were people inside.  Perhaps everyone else was out on the terrace.

Very quiet background music was mostly hidden by gentle conversations and the clink of glasses behind the counter.

Another new GBG tick, there's only one left to do, so I might even complete Merseyside before the new edition comes out in November.

Next, an extended rural stroll, risking being mown down on the roads with no pavement (It could have been a friendly toot from the van driver but I don't think so.) to the Wheatsheaf which I last visited in 1999: Wow, what a gem this is, a proper country pub with a thatched roof tucked away in the village of Raby.  The interior features classic wonky beams, and some very old looking wooden seats.

Four or five handpumps, but I didn't look further than Titanic Plum Porter, which was lovely but perhaps not the best choice on a hot day, Trappers Hat being more appropriate.  £4.50 is a bit steep for Merseyside, I must say.

Gentle conversations were the only sounds in here, as I enjoyed my ale.  Sandwiches and chips were delivered to a nearby table, and suddenly I felt very hungry!

I wondered how many thatched pubs there are in Merseyside; the only ones I could call to mind were the Scotch Piper in Maghull and, much nearer here, the Devon Doorway.

Another rural walk in blazing sunshine, this time on much quieter roads, took me to the village of Thornton Hough and the Seven Stars, where I unaccountably forgot to take a picture, so I've stolen this one from the pub's web site: 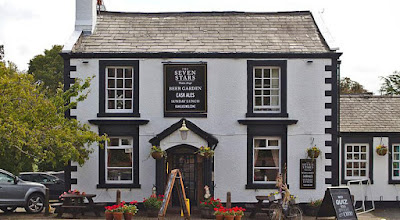 Another great rural pub, the beams perhaps not as wonky as the Wheatsheaf's.  Only eleven years since my last visit, and it doesn't seem to have changed since then, remaining very pleasant and comfortable.

After the last two places, only two handpumps seemed a bit disappointing at first glance, but of course one quality real ale is all that is needed, and my Trappers Hat was gorgeous.  I noticed most of the regulars seemed to be drinking lager, that's a bit disappointing.

Again, quiet background music was mostly drowned out by cheerful chatter.  It was past five by now, and the place was ticking over nicely although by no means full.  All the regulars knew each other and chatted (I was sitting in the "bar side")

When I sit in a lovely pub like this I briefly wish I lived in a village with a great pub, but in reality it wouldn't work, I can't see every pub survey beginning with a one hour bus ride!  Just not suitable for my lifestyle, which requires easy access to a train service and shopping without the use of a car.  Oh no, I'm writing about "lifestyle", and after only three pints; better go home!

I contemplated extending my researches but there weren't really any nearby options, so I simply chose the long bus ride back to Liverpool.  Would my bladder cope?  ... It did.

Three beautiful pubs, one never before visited, three excellent pints, some beautiful countryside in the sun, what more can one ask for in a pub survey?  A free lift home?  No chance!

Pub of the day: Too close to call, all three were great.
Miles walked: 3
Maybe coming soon: St Helens
Posted by Phil Wieland at 23:10