Other stuff took me to Knotty Ash, so it would be daft to miss a few pubs long overdue for a visit, starting with the Wheatsheaf: To be honest, I can't really remember what this was like when I was here in 2003.  I think it's lost some of its old features in an excellent refurbishment, but it still has a lounge side with no counter, and some Joseph Jones & Co Knotty Ash Brewery windows.  I'm guessing the table service I noted in 03 has also gone, although there was a steady flow of food coming out of the kitchen, keeping a waitress busy.

Three handpumps on the counter, but all had the clips turned round, so I had a refreshing lager.  A bit disappointing when there's a Cask Marque sign on the door.

The tables outside were busy, with most people dining, inside was not as busy but still a few people drinking in the bar side.

Next, just a little way along the road is the Lord Nelson: 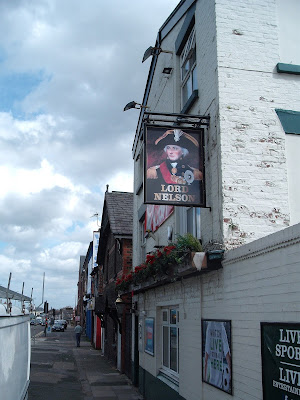 Again, I can't remember back to '03, but I suspect the traditional multi-room interior is pretty much unchanged, apart, of course, for good maintenance.  It's certainly very nice, anyway.  No suggestion of real ale here, so another pint of fizz to keep me going.

A number of older-than-me regulars were chatting, mostly hiding the quiet music.  I couldn't see how many people were in the other rooms or the back yard, but judging by the number coming in for a drink or to visit the toilets I guess there were quite a lot.

What a great example of a local boozer, this, friendly and lively on a Friday afternoon.

Next, I had to tighten my resolve, as there was a target not visited since 1998 not too far away, but I had to walk past umpteen open pubs, including at least one with real ale, to get to the Glasshouse: I headed back to Old Swan, where there are a couple of places not visited since 2017 but wait, what's this?  Victory from the jaws of defeat - An unknown one!  Hoggin's: An "Irish" pub in a shop conversion where the friendly barmaid informed me they'd opened last year, as she poured my Guinness (What else?)

Rather well done plain decor in here, resisting the temptation of over the top fake Irish nonsense.

Busy at four on a Friday, with almost all the tables occupied, and the quiet background music drowned out by animated chatter, which included a lot of swearwords.

Obviously I'm biased because this was a totally unexpected bonus, but something about the atmosphere here endeared it to me, the friendly staff (two) chatting with the regulars making for a comfortable experience.  I was waiting for someone to ask what I was doing with the tablet, so I could explain the guide, but no one did.

Next, a place last visited in 2017, but renamed since, the Old Tavern: This used to be one of the early micro-pubs, opened in 2016, when it was called the Ale House.  Sadly, it would appear that it wasn't successful in the cask ale format, and under the new name it's all keg.  Nothing wrong with that, my Camden Pale was delicious, but I must comment that it is neither old nor a tavern.

The pale was served in one of Camden's rather unique glasses, like a standard conic but short and fat.  Very unusual and I quite like them;  they seem to fit my hand very well.

Nowhere near as busy as Hoggin's, but still ticking over OK, the rather eclectic music (That means, music I don't recognise.) was mostly louder than the conversations.

I eyed up the counter as I enjoyed my hoppy beer:  Eight taps, two I've never heard of - Pardal and Mago Lager.

Pub of the day: Hoggin's, because it was an unexpected bonus.
Miles walked: 2.1
Maybe coming soon: Thornton Hough, St Helens
Posted by Phil Wieland at 23:29